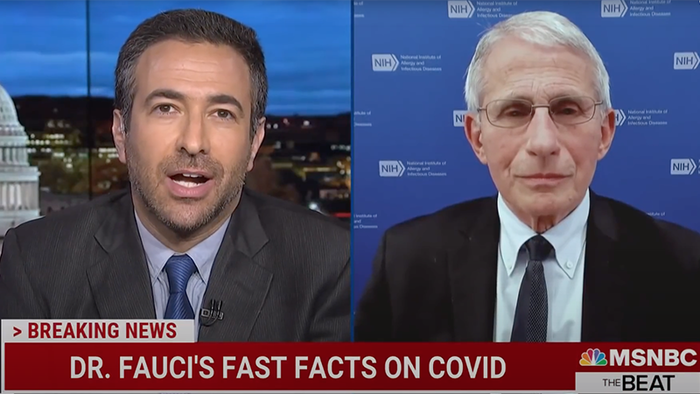 Anthony Fauci, who continues to appear on TV every day two years into the pandemic, declared Tuesday that anyone who criticises him is “killing people.”

In an MSNBC interview, Fauci proclaimed “I’m not in it for a popularity contest. I’ve devoted my entire professional career of 50 years to try and essentially safeguard and preserve the health and lives of the American people and as an infectious disease doctor who deals with outbreak, that gets really extended to the rest of the world.”

“That’s what I do,” Fauci further declared, adding “The praise or the arrows and slings are really irrelevant. I do what science drives you to do, and that’s what I do. And you know, I’m not in it for a popularity contest. I’m trying to save lives.”

In between gain of function funding and torturing dogs, he cares about lives.

Fauci continued, “And the people who weaponize lies are killing people. So the only question I have is that when you show Tucker Carlson and Peter Navarro criticizing me, I consider that a badge of honor.”

He added, “I just wanted to make that statement. People throw up those people that make ridiculous statements. They’re telling people to do things that they’re going to die from and telling me I should go to jail. As they say in my old neighborhood in Brooklyn, give me a break, will ya.”

The arrogance is plain to see once again.

Fauci’s critics are pointing out his lies over funding dangerous experiments with coronaviruses, his flip flops over health policies such as masking and lock downs, and his constant moving the goalposts when it comes to vaccine efficacy, in tandem with an obvious casual lack of regard for freedom.

In an interview with Glenn Beck this week, Senator Rand Paul noted that “Fauci not only has a casual disregard for science, but also for individual liberty. You combine the two — ignoring the science, and then having no regard at all for individual liberty — and you have a really dangerous situation. But it’s also dangerous because we’ve centralized the authority.”

Paul further explained, “I have opinions on where the virus came from. I have opinions on how to treat it. But they’re my opinions, you don’t have to take them. If you agree with me, you can listen to my opinions. With Dr. Fauci, it’s not the same. He has opinions, but he wants you to be forced to do as he says. So it is the difference between coercion and freedom. And in freedom, there are many choices. But the real danger is, as we centralize authority, ultimately you get authoritarianism. And I think that he could easily be a medical dictator, if he were allowed to be.”