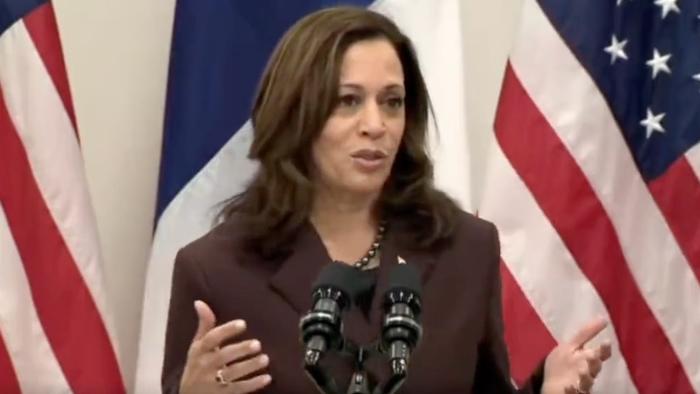 
President Biden and his VP Kamala Harris have tried their hardest this week to try and win back the approval of the American people by offering desperate handouts from the US strategic petroleum reserves as Americans brace for the highest pre-Thanksgiving prices for gasoline ever (which has been driving inflation higher more generally).

But the reality is that fewer Americans trust Biden to handle the economy now that they’re struggling with the results of Democrats’ free-spending ways, leaving the president’s approval rating to slide to the lowest levels yet (and VP Harris’ approval rating at the lowest of any VP in history).

And while President Biden has struggled to shift the blame for surging inflation while desperately trying to combat higher oil prices, his No. 2, VP Harris – who has already had her first taste of leadership, officially serving in Biden’s stead for several hours while he underwent anesthesia for a colonoscopy earlier this month – has offered her own overly simplistic take on why inflation seems to be surging during a recent interview.

But why are Americans struggling with the highest prices in a decade this fall? Wasn’t this all supposed to be – to use the words repeatedly marshaled by the Fed’s newly renominated Jerome Powell – transitory?

Even when confronted by Democratic operatives posing as reporters (ABC News’s George Stephanopoulos is a former advisor to the Clinton’s), Harris has struggled to explain it all.

Cause and effect still operates: when you spend trillions of dollars, the result is inflation.

American families are struggling because of the Biden-Harris administration’s policies. pic.twitter.com/Kwzdddxahn

But this hasn’t stopped her from buying in expensive cookware during a recent diplomatic trip to the Louvre, as the Washington Free Beacon reveals.

Amid economic turmoil and calls to buy local in the United States, Vice President Kamala Harris dropped nearly $400 for a single pot at a boutique shop in Paris, the Washington Free Beacon has learned.

Overseas last week on a four-day diplomatic trip to mend the U.S. relationship with France, Harris stopped in at E. Dehillerin, a pricey cookware shop outside the Louvre museum, where she dropped hundreds of dollars on various kitchen items. The big-ticket items in the haul were a $375 serving dish and $160 frying pan, the Parisian specialty store told the Free Beacon. The vice president rounded out her purchase with various smaller accessories, such as a porcelain cocotte and egg dish, a copper cleaner, and various wooden spoons.

All together Harris spent 516 euros, which amounts to roughly 600 dollars at the current exchange rate. Reporters joined Harris in the store as she browsed but were kicked out before they could record details of her lavish purchase, according to C-SPAN video of the E. Dehillerin visit.

So, while millions of Americans struggle to pay for their own Thanksgiving dinner, Harris is spending $400 at a fancy Louvre gift shop.

Could there be a more appropriate symbol of the Democrats’ contemporary malaise?