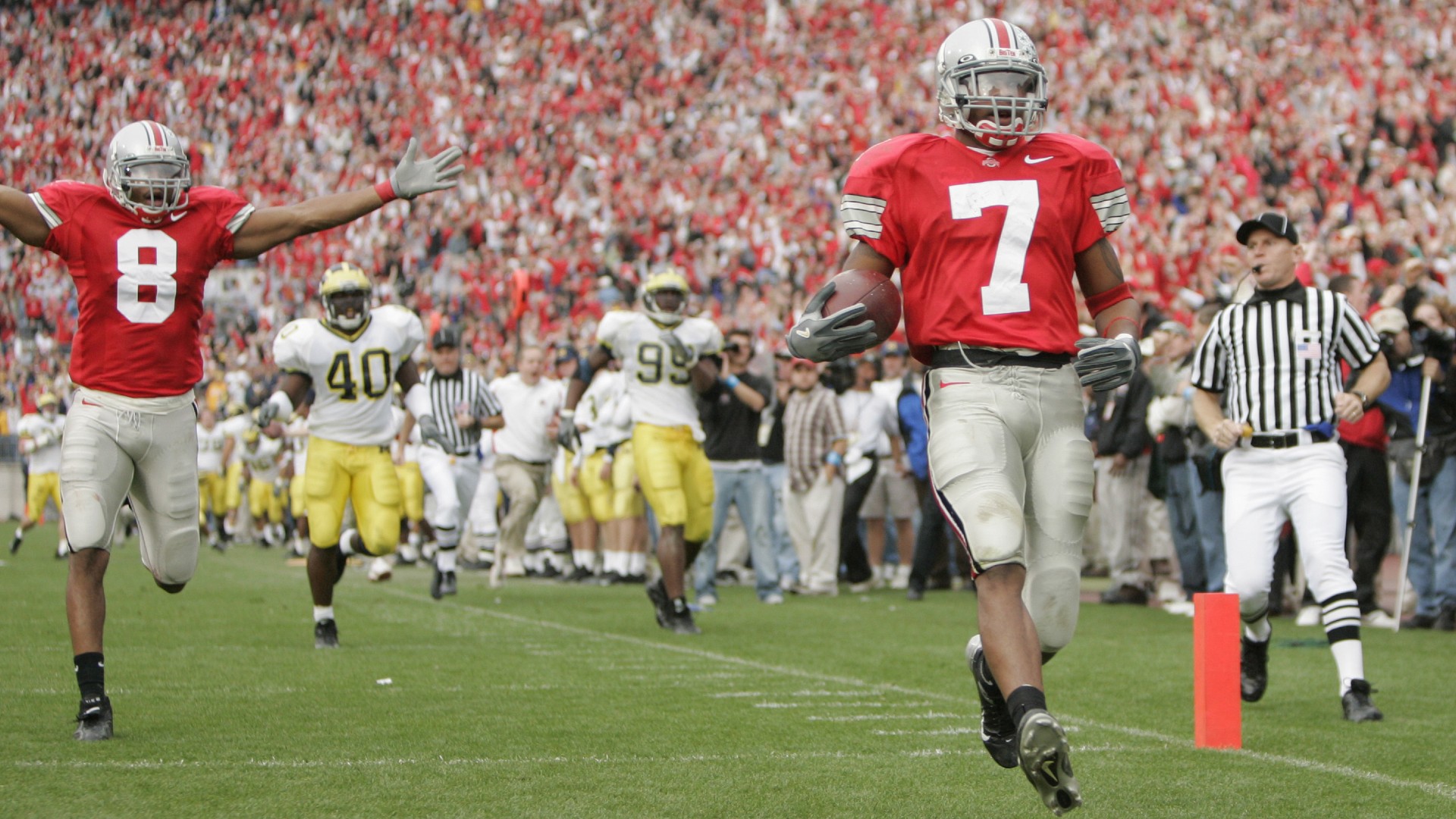 
Neither Desmond Howard nor Ted Ginn Jr. realized the impact at the time, but the returns have lasted forever in Michigan-Ohio State lore.

This year marks the 30th anniversary of Howard’s signature moment — a 93-yard punt return in a 31-3 blowout on Nov. 23, 1991 which the former Michigan legend put the finishing touch on with the Heisman pose at Michigan Stadium.

On Nov. 24, 2004, Ginn came up with the response for the Buckeyes. He weaved through defenders and accelerated down the sideline with an 82-yard return in a 37-21 Ohio State victory at Ohio Stadium.

“The only thing I’m thinking about at the time was crossing the pylon and getting six,” Ginn told Sporting News. “Once you really stop and turn around and think, ‘I really did it’ then you have six or eight players in your face. It’s that split second you remember.”

Those two plays are must-have clips in the montage for The Game, which will be renewed Saturday when No. 2 Ohio State faces No. 5 Michigan in the latest top-10 chapter of college football’s most-storied rivalry.

That’s also a reminder that the punt itself might be the defining play in the rivalry’s history. After all, in the famed Snow Bowl on Nov. 25, 1950, the teams combined for 45 punts, and Michigan’s Tony Momsen fell on a blocked punt to give the Wolverines a 9-3 victory.

The Ten-Year War between coaches Woody Hayes and Bo Schembechler started in earnest with Michigan’s 24-12 upset on Nov. 22, 1969. That was launched, of course, with the help of Barry Pierson’s punt return to the 3-yard line which set up  a touchdown.

Nearly 50 years later on Nov. 24, 2018, Ohio State’s Sevyn Banks returned a blocked punt 33 yards in a 62-39 victory against Michigan that marked the final act in Urban Meyer’s seven-year dominance of the Wolverines.

Yet no two returns resonate more than Howard and Ginn, a pair of Cleveland natives linked by those incredible moments. Howard knows the significance of how one special teams play can change everything now.

“At the time, you never would have imagined that. You’re just in the moment,” Howard told SN. “You’re trying to make something happen. I was in the flow of the game, trying to do something to help my team out.”

Howard enjoyed an incredible season in 1991. He made “The Catch” against Notre Dame. The Wolverines were looking to clinch a Big Ten championship, and Howard’s flair for the big moment made him the overwhelming Heisman favorite.

Howard had plans for an end-zone celebration against the Buckeyes, too.

“I had actually wanted to do a backflip,” he said. “That is what I practiced doing. I was dating a gymnast, and she taught me how to do a backflip. I was like, ‘If I ever get out in the open field and there is no one within eight to 10 yards from me, I’m going to stop at the goal line and do a backflip into the end zone.”

Michigan led Ohio State 17-3 in the first half of that 1991 matchup, and Howard stood at the 10-yard line awaiting a punt from Tim Williams. Howard told SN he wasn’t even supposed to field the punt.

MORE: It’s a two-man race for the Heisman

“It was one of those games that I could make an impactful play in,” Howard said. “I rolled the dice and took the chance.”

Howard juked one defender, split two more then shuffled to the sideline before sprinting to the end zone. Of course, the split-second decision to strike the “Heisman pose” is what everyone on both sides of the rivalry remembers most.

That was a last-second call by Howard, who told SN he considered doing a backflip that he had practiced leading up to The Game.

“I was having this conversation with myself on the way down,” Howard said. “I got to maybe the 12 or 11 yard line, I said, ‘You know what. I do this and mess up, I’m on SportsCenter for the wrong thing, I crossed the goal line and spontaneously did that. It was like, ‘Boom.'”

Howard made the right decision. The “Heisman pose” continues to be synced with legendary broadcaster Keith Jackson’s call for more than three decades since.

“You couldn’t have scripted it better,” Howard said. “The timing of everything. Keith Jackson is going through the moves I’m making, then he lays out and just lets the moment build. Then, as I cross the goal line, he hits you with the, ‘Hello Heisman!’ C’mon man. Pick a director or producer. No one could have scripted it any better than the way it unfolded that afternoon.”

The almost-identical sequel would come on Nov. 22, 1997, when Michigan’s Charles Woodson returned a punt 78 yards for a touchdown in the Wolverines’ 20-14 victory. Woodson also won the Heisman Trophy, and Michigan won the AP national championship.

Those are the two flashpoints of an era from 1988-2000 in which Michigan dominated Ohio State with a 10-2-1 record during the John Cooper era.

Ohio State Jim Tressel was hired after the 2000 season, however, and one of his first prized recruits was a Cleveland native who knew the Howard legend well.

Ted Ginn Jr. was 6 years old when Howard struck the pose against Ohio State. Ginn, like Howard, grew up on the east side of Cleveland.

When Ginn was working up the youth football ranks, the Desmond Howard Saints were the team to beat.

“Everybody wanted to be Desmond,” Ginn said. “The ’21’ always stood out. I definitely knew about his punt return as a kid.”

Ginn emerged as a five-star receiver and track star at Cleveland Glenville High School and was part of a loaded recruiting class under Tressel in 2004.

By then, Tressel changed the tone of the Ohio State-Michigan rivalry by leading Ohio State to a national championship in 2002. Michigan responded with a Big Ten title the following season and was looking to restore order with a victory in Columbus, Ohio, on Nov. 20, 2004.

Ohio State led 20-14 in the third quarter, and Ginn was still smarting about the previous punt return, which he nearly scored on but was tripped up.

Like Howard, Ginn wasn’t even sure he would field the punt because Santonio Holmes was also back for the return.

“It was in one of those dead areas in the middle of both of us where I didn’t know whether to say ‘You’ and he didn’t say ‘Me,’” Ginn said. “So if the ball falls it doesn’t hurt us.”

Ginn took the punt, sidestepped a defender then ducked through another before taking a familiar route to the sideline. Ginn hit the next gear, and Michigan punter Adam Finley had no chance. ABC broadcaster Brent Musburger had the call this time and simply said, “Forget about it. This baby’s over, this race.”

“A couple guys were there, but I just made my move,” Ginn said. “Once I got outside I saw daylight. There wasn’t anybody gonna catch me then.”

That was Ginn’s fourth punt return TD of the season, and it was the exclamation point on Ohio State’s 37-21 victory. Howard remembers watching the play, too.

“The fact he’s a kid from Cleveland, Ohio, and went to Glenville High School; I was very aware of his exploits, too,” Howard said. “He was such a dynamic player. He was so fast.”

The Buckeyes have dominated The Game ever since. Ginn was a junior during the No. 1 vs. No. 2 showdown which Ohio State won 42-39 on Nov. 18, 2006. The Buckeyes are 15-1 against the Wolverines since 2004, and Ginn’s punt return serves as that same flashpoint.

“We were the ‘Fun Bunch,'” Ginn said. “We started it. That’s what we were at the time. We weren’t doing anything but playing football. At that time, I didn’t know how big the rivalry was. I was just playing in a football game.”

Howard returned eight punts for TDs from 1992-2002 and earned Super Bowl XXXI MVP honors with the Green Bay Packers after a 99-yard kickoff return for a TD. Ginn had seven return TDs in a career that stretched from 2007-2020.

Now retired, Ginn Jr. runs the Ginn Elite youth football program in Cleveland. With each passing year, that appreciation for the rivalry continues to increase.

“As years went on and after I did what I did, I started to understand that this is what it’s about,” Ginn said.

Now, the Wolverines and Buckeyes renew that rivalry. Would a punt perhaps swing what should be another classic between the Big Ten rivals?

“All the time,” Ginn said. “Special teams and big plays. That’s what you’re looking for in a game like this.”

Ohio State has put star receivers Garrett Wilson and Jackson Smith-Njigba on returns this year, and Michigan has returners A.J. Henning and perhaps Blake Corum if he returns from a leg injury. Henning returned a kickoff 81 yards for a touchdown on a trick play against Maryland in Week 12.

In a game of top-10 teams looking to make the College Football Playoff, perhaps a punt return could make the next turning point.

Howard, who has been an analyst for ESPN’s “College GameDay” since 2005, will relive his Heisman moment this weekend. He can’t help but wonder whether another special moment is coming.

“I could (see special teams being critical) from the simple fact that field position is going to be important if nothing else,” Howard said. “Points are hard to come by in a game of that magnitude between two great teams. I can definitely see special teams playing a significant role in the outcome of the game.”