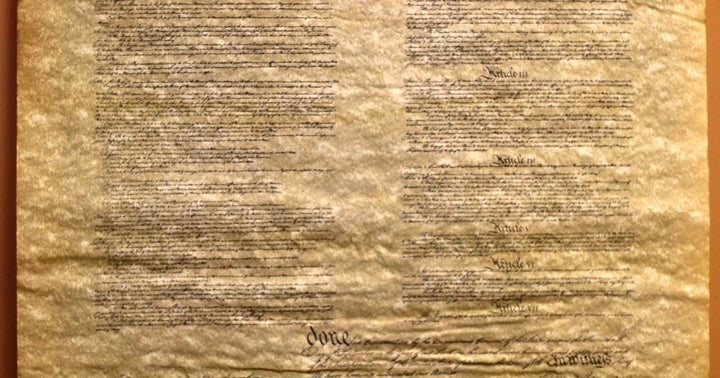 A stock market David vs. Goliath story occurred in 2021 with retail investors facing off against hedge funds. The battle saw rising valuation of stocks that included GameStop Corp (NYSE:GME) and AMC Entertainment (NYSE:AMC) and a battle of short sellers.

The David vs. Goliath battle has now spilled over into the world of cryptocurrency and includes a shared character.

What Happened: A group called ConstitutionDAO attempted to buy one of 13 copies of the U.S. Constitution from a Sotheby’s auction.

The group broke crowdfunding records and raised over $41 million. Ultimately, the group came up short and was outmatched by a $43.2-million bid.

David Vs. Goliath: The publicity surrounding the ConstitutionDAO included the group sharing how much they had to bid on the U.S. Constitution, which may have overplayed their hand and made it known how much someone could bid to beat them.

With a motto of “We the People, For the People,” ConstitutionDAO fought to win the auction to keep it away from a rich person.

The group lost out to Ken Griffin in its bid to buy a copy of the Constitution. If the name sounds familiar, it could be because he was a central character in the GameStop storyline and was portrayed by many as a villain against GameStop and the WallStreetBets crowd.

Griffin is the CEO and founder of Citadel and is worth more than $20 billion, according to the Bloomberg Billionaires Index.

Griffin was one of several people in the GameStop storyline who had to testify before Congress.

Related Link: Miss Out On ConstitutionDAO? You Can Buy Shares In The Declaration Of Independence For $25 Each

While some have said that Robinhood Markets Inc (NASDAQ:HOOD) colluded with Citadel to keep traders from buying and selling certain stocks, Griffin maintains his and his company’s innocence.

“It was like a ‘Saturday Night Live’ sketch the whole time,” Griffin told Andrew Sorkin. “The whole GameStop conspiracy theory, I mean that’s come and gone. It was fascinating to be in the center of that conspiracy.”

The SEC’s report highlighted that Robinhood, TD Ameritrade and E*Trade Securities made up 66% of customers trading GME options. Citadel represented 50% of internalized volume of GameStop shares in the month of January.

Traders have also pointed out that Robinhood got 34% of its fiscal 2020 revenue directly from Citadel, with market makers representing the majority of its full-year revenue.

Griffin plans to have the original Constitution copy featured in a museum or public space.

“The U.S. Constitution is a sacred document that enshrines the rights of every American and all those who aspire to be,” said Griffin. “That is why I intend to ensure that this copy of our Constitution will be available for all Americans and visitors to view and appreciate in our museums and other public spaces.”

Why It’s Important: An estimated 13% of the 17,437 contributors to ConstitutionDAO had never purchased Ethereum (CRYPTO: ETH) before.

Around 44% of contributors had a low cryptocurrency history of less than 40 transactions in their lifetimes.

ConstitutionDAO brought new people to the cryptocurrency space and also showed how powerful a pooled community group can be.

While the ConstitutionDAO is refunding its users after the failed bid, many other DAOs are popping up with plans to buy other historical documents and assets.

PleasrDAO made headlines this year for purchasing the original Dogecoin meme and a one-of-one Wu-Tang Clan album.