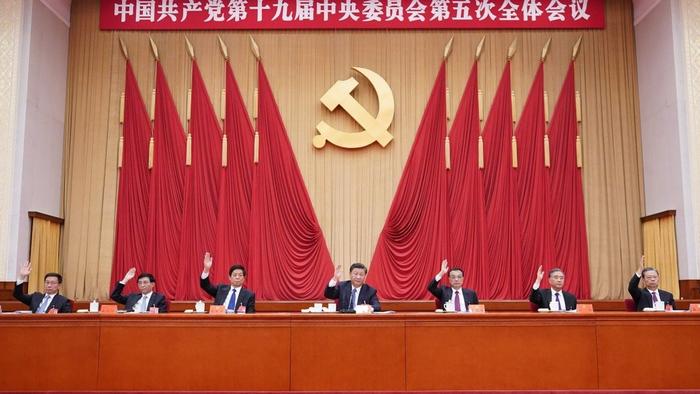 
China’s Communist Party Central Committee is now holding its 6th Plenum, running from Nov.8 through Nov.11, where it’s expected that an ultra-rare so-called “historical resolution” will be written that will allow Xi Jinping to rule for life, after a prior 2018 constitutional amendment already effectively removed the two-term limit for the President. This week in Beijing will mark the closest thing the country has that comes close to a campaign season, likely to result in an emboldened Xi as he continues confronting the West.

The party’s plenums are a series of meetings meant to solidify the agenda between each party congress, involving some 400 party bosses, military leaders, and top policy advisers who gather at a heavily guarded hotel in Beijing for the event. The proceedings and especially any potential party in-fighting are mostly secretive, with the plenum agreeing on an end of session communique issued to the public.

Bloomberg comments on what’s at stake for this week’s plenum: “The first official declaration on Chinese history in 40 years is set to top the agenda when the ruling party huddles this week in the last major meeting before a twice-a-decade congress next year, where Xi’s expected to break precedent and secure a third term to extend his indefinite rule.”

For context, the only prior leaders to ever author “historical resolutions” were Mao Zedong and Deng Xiaoping – the latter dubbed the “Architect of Modern China” – and both staying in power until death. The 68-yeard old Xi has already solidified his hold over China’s three major power centers: namely he’s currently served nine years as President, and is General-Secretary of the CPC, and is Chairman of the  Central Military Commission (CMC) – having all armed forces firmly under his control.

(There are, of course, several Forever Presidents in the world.) https://t.co/51CiYSd2ea

“The purpose (of this plenum) seems to be to review the party’s governance in history, and to pave the way for the future leadership and their policy direction,” a political scientist at Nanjing University, Gu Su, was quoted in international reports as saying.

And Bloomberg additionally summarizes the significance of the plenum as follows:

As the leader of one-fifth of the world’s people, Xi’s potential to rule for life has huge ramifications. China’s most important man is already on a mission to redistribute the nation’s wealth to build a fairer Marxist society.

That “common prosperity” campaign wiped about $1 trillion off the value of Chinese stocks globally in July, and impacted the business of everyone from delivery drivers and after-school teachers to tech giants and celebrities, with major fallout for global investors.

China’s leader Xi Jinping appears to be laying the foundation for a third term in power as top officials of the all-powerful Communist Party meet this week in Beijing.

Thus far Xi has issued a draft resolution of “major achievements and historical experience” to the party’s Poltiburo for review. Of course, much of the plenum is expected to be filled with self-congratulatory praise and the usual enthusiastic patriotic displays conveniently editing out past failures.

Biggest News of the Day: China’s “President” Xi Jinping gathered 400 members of the Communist Party’s all-powerful Central Committee, and they are set to unveil a new doctrine to let him rule for life. pic.twitter.com/4gEXLMH6Jm

And here’s more previewing the session this week in Beijing via Rabobank:

As Bloomberg puts it: “Between each party congress, the Communist Party’s Central Committee meets seven times in meetings called plenums that cover different topics…the agenda is top secret and only revealed in a communique afterward….It’s the final chance for horse trading before big decisions are made at the following year’s congress.” This plenum may see Xi Jinping pass an ‘Historical Resolution’, a landmark statement on CCP history and policy direction, and only the third ever if so. The first under Mao in 1945 cemented centralization of the economy; the second under Deng in 1981 revised that view and cemented a shift to opening up; the third would cement ‘Common Prosperity’ in place – and addressing the Mao and Deng eras is possible via a resolution on: “the major achievements and historical experiences of the party’s 100 years”. The New York Times states: “While ostensibly about historical issues, the Central Committee’s resolution —practically holy writ for officials– will shape China’s politics and society for decades to come.” Wall Street will of course call it all “regulatory changes”, if it even notices what happened.