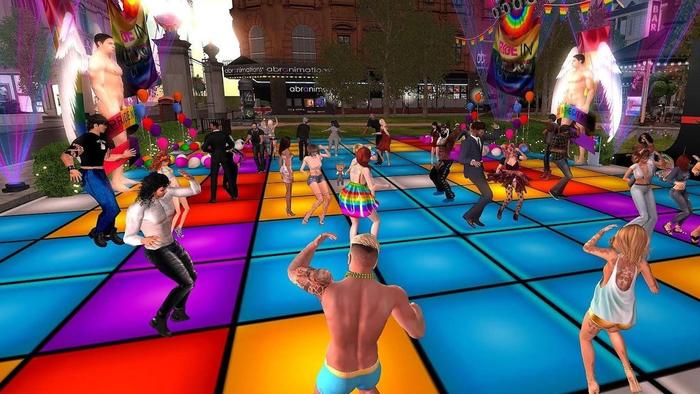 This week I was saying we are in a global meta-crisis…and then Facebook change its name to “Meta” – replete with a new logo that looks like a PlayStation controller, a sleep mask, or a bad sports bra. (Someone was paid a lot of money, or ‘IOU Chicken’, to mis-draw an infinity loop.) The aim is now “the metaverse”, where promo material shows we can play poker with robot avatars in simulated zero gravity. Welcome to the second coming of Second Life, which we used for a few weeks in the early 2000s until collectively realizing how pointless it was to wander around virtual landscapes of boring people pretending to be blue-haired Elf ninja warriors? Perhaps fusing it with social media (cough, don’t mention that function) makes it more appealing? For people unsatisfied by pre-existing ‘I am a cat!’ chat features, perhaps; and maybe my future client presentations will be in zero-g with robot avatars? If so, I bagsy Eeyore as my avatar. However, are ageing Facebook users really going to wear VR goggles? How will they fit over their bifocals? And for the younger crowd, there seems stiff competition from LARPing offline.

As the crème-de-la-crème of US tech boldly walks away from the reality of multiple conflating crises, others are taking a more hands-on approach. President Biden tried to rally the party troops to strike an agreement over the legislative logjam – which matches the one at LA/LB ports, where nothing is moving either, but they are at least able to raise taxes. Despite Bloomberg reporting Biden warned both his presidency and the Congressional majority were on the line, there was still no agreement between Progressives and moderates. That was despite Q3 GDP rose only 2.0% q/q annualised, and the outlook not being for a rebound to spaceships and zero-g in Q4. As markets start to see the risk that no stimulus appears, will they exit the virtual reality of rapid rate hikes being needed to stop supply-chain inflation central banks cannot control?

Yesterday, the ECB showed its screen has frozen, and is still saying inflation is “transitory”. That’s akin to the way the EU is stuck in the early 2000’s: EU bureaucrats spend their evenings wandering through empty meeting places saying, “Free trade now!” and “More Europe!” – and I don’t mean in ‘Second Life’. Obviously, market expectations of 2022 rate hikes are incompatible with the ECB’s intentions, but President Lagarde did not push back as much as the market required. It seems we will have to wait until the December meeting, where nothing will probably change, for the market to grasp this better. Meanwhile, PEPP ending in March is now all but certain, but the ECB is clearly not planning to tighten more quickly, while the phrase “APP will run for as long as necessary […] and to end shortly before the ECB starts raising key interest rates” was left in place. Or, “Je vous dois poulet.”

Then again, the RBA once again didn’t intervene to defend its yield curve target today, surely a green light they are moving from one form of virtual reality to another. Or they think they are wearing a VR headset, but are actually wearing horse-blinders with a smiley face painted on the inside. Meanwhile, PPI was 2.9% y/y, up from 2.2%, versus the double-digit readings elsewhere, and retail sales were up 1.3% m/m today vs. 0.4% expected.

In China, things are more hands on. Beijing has announced “its struggling manufacturers can pay taxes later,” according to the SCMP – or at least SMEs can defer for the next three months. Moreover, “China is monitoring prices of vegetables, meat, grain, and edible oil and arranging works on stabilizing supplies and prices” says MOFCOM. How this will be done when agri input costs and food prices are soaring globally and China is a net food importer remains to be seen.

Perhaps subsidies like those on coal? Which themselves mean the backdrop to the COP26 climate crisis meeting is Beijing piling into coal until 2025; and India; and Australia; and others; how many Brits will need to glue themselves to things in response? Oh, and Evergrande made another last-minute bond payment – presumably with the Chairman finding some loose change down the back of the sofa.

In terms of the US-China phase of the meta-crisis, somebody is trying to dial things back. Bloomberg argues ‘Biden-Xi Thaw Takes Hold Even as Taiwan Tensions Flare,’ which is odd given US General Milley just warned, wrongly, about a “very close to“ a Sputnik moment, and China Telecom was banned from the US this week. US Trade Representative Tai is also aiming ‘to reduce US-China tensions’. Speaking at the US National Chicken Council (not to be confused with the US National IOU Chicken Council, which is in the Eccles Building), Tai stated US-China relations feel “kind of like a pile of dry tinder,” where a misunderstanding “is likely to spark basically just a giant fire with really, really drastic implications for all of us.” She aims to “bring the temperature down so that we can have a sober relationship and a sober conversation about how we can stabilize the parts of our trade that are working.” Which, somewhat counter to her key speech on the US-China trade structure a few weeks ago, means US agri exports playing a key role in helping to feed China.

One wonders if Chinese action to stabilize food supply and prices is a headwind or a tailwind there – and given that Huang Qifan, a prominent Chinese technocrat, just stated part of its 2035 goal of a $30trn economy is “self-sufficiency in energy, agriculture, and manufacturing.” He also argues the GDP growth share driven by real estate and infrastructure will fall from 50% to 10%, and real estate development area from 1.7bn to 1.0bn M2. That’s quite the trend decline in the needs for certain associated inputs, such as steel and iron ore. Then again, there is a strong argument that *physically* building a virtual reality is not the best way to manage an economy in the long run.

One also wonders how much of the true meta-crisis will be discussed at the G20 finance and health ministers’ meeting vs. how much of the apparently unrelated parts. And will they be planning for one of their future get-togethers to be as robot avatars in zero-g?

Anyway, enjoy the day and the weekend, and try not to get too meta. Happy Friday!