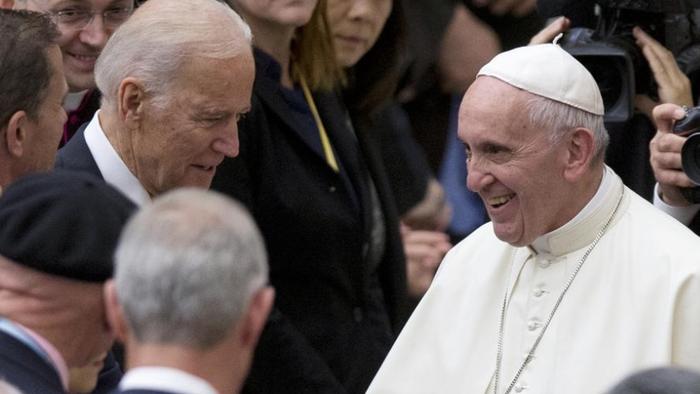 
Is arguably the most progressive Pope in the Catholic Church’s 2,000-year history suffering a rift with America’s second-ever Roman Catholic president? Or maybe the Vatican is simply worried that President Biden might embarrass the Vatican by being mentally unfit for a public appearance after such a long trip, and with so much else going on.

According to the AP, the Vatican abruptly cancelled a planned live broadcast that was supposed to feature President Biden meeting Pope Francis. This marks the latest move to curtail media coverage by the Holy See (ie the Vatican) as controversies over Pope Francis’s progressive positions – along with revelations that he too was complicit in the Catholic Church’s sex abuse scandals – have hurt his popularity.

The Vatican press office offered no explanation for why the live broadcast was canceled. The two leaders are still expected to meet after Biden lands in Rome for a G-20 meeting.

The live coverage was supposed to show Biden meeting Francis in the palace Throne Room, as well as footage of the two men sitting down to begin their private talks in Francis’ library.

Instead of airing any of this live, the Vatican says it will provide edited footage after the fact.

Biden has met Pope Francis three previous times, but this will be his first meeting with the leader of the world’s 1.2 billion Catholics as President.

Although the Vatican didn’t offer any clues as to the reason for the cancellation, it’s worth noting that Pope Francis is expected to hold his annual meeting with American bishops in a few weeks. A large group of American bishops have been pushing a new rule that would deny Biden – a lifelong Catholic who has made his faith central to his identity – communion, effectively ex-communicating one of the world’s most visible Catholics from the church.

Reporters covering the Vatican say they don’t expect any document that emerges from the bishops’ conclave with the Pope to mention Biden by name, but the expectation of a “clear rebuke” remains.

Per the AP, live broadcasts with world leaders are particularly important because the Vatican hasn’t allowed independent photographers and journalists into papal audiences since the start of the COVID pandemic. The Vatican has continued to cite the pandemic as a reason to deny external media access to the beginnings and ends of papal audiences.

When asked about Biden’s Vatican trip at a White House press conference the other day, Spokeswoman Jen Psaki “there’s a great deal of overlap between Biden and Pope Francis on a handful of issues”.

These issues will be the “centerpiece” of their discussion.

“I have just outlined for you what the focus of the meeting will be – now it’s time to move one… You know that the president believes in a woman’s right to choose, we’ve spoken on this issue many times.”

She later added that the administration is “pulling every lever that we have” to try and ensure more access.

The Vatican correspondents’ association says it’s against the cancellation because it will limit pool access and several media outlets formally complained about the decision Thursday.

Biden isn’t the only G-20 leader scheduled for a live audience with the pope during the summit. The leaders of India and South Korea are also scheduled for audiences with the Pope. It’s not clear whether live broadcasts of those meetings have been cancelled as well, although cancelling coverage for Biden and not other leaders would be tantamount to a major snub, and perhaps a sign that the Pope might support denying Biden communion over his stance on abortion, particularly at a time when conservative states are tightening restrictions on abortions, something the Catholic Church officially supports.