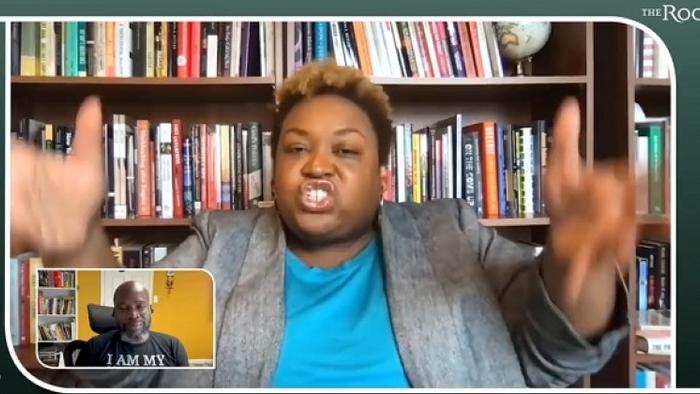 A Rutgers gender studies professor gave an interview in which she asserted that “white people are committed to being villains,” and, “we gotta take these motherfuckers out!”

“Dr. Brittney Cooper, a professor in the Rutgers Women’s, Gender, and Sexuality Studies department that goes by the Twitter moniker “ProfessorCrunk,” appeared on a September YouTube interview with writer Michael Harriot of The Root to discuss Critical Race Theory and recent attempts to oppose it being taught in elementary and high schools,” reports the College Fix.

During an outburst about white people fearing retribution if they give up power to blacks, Cooper made it clear what needed to happen for whites to relinquish control.

“The thing I want to say to you is that we gotta take these motherfuckers out, but like, we can’t say that, right?,” Cooper screeched.

Rutgers professor: “White people are committed to being villains,” “We gotta take these MF’ers out.”

This professor spewed hatred on a YouTube video with @TheRoot. pic.twitter.com/QrGsv77CCC

After uttering that call to action, which would be taken as an ominous violent threat if said by a white person, Cooper claimed she doesn’t believe “in a project of violence.”

The professor went on to call whiteness “an inconvenient interruption” in the history of the world and claimed that black societies were “being brilliant, and libraries, and inventions, and vibrant notions of humanity, and cross-cultural exchange long before white people showed up being raggedy and violent and terrible and trying to take everything from everybody.”

Cooper makes $112,000 a year to lecture everyone about how much she hates white people, a surprising opportunity given that she thinks America is still run by “white supremacy.”

The interview once again highlights the demented anti-white extremism that has come to dominate the social justice movement and academia.

Such disgusting rhetoric is the natural conclusion of Critical Race Theory programs that teach white people to hate themselves and that its normal for them to face institutionalized vitriol and condemnation for their skin color.

The interview remains on YouTube, fully monetized, with no restriction of any kind whatsoever.

The Root is the perfect platform for such vile rhetoric given that they published an article last year declaring that “Whiteness” is a “pandemic” and “the only way to stop it is to locate it, isolate it, extract it, and kill it.”