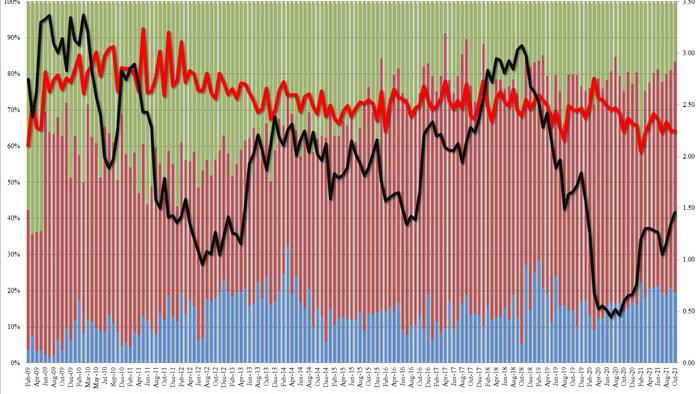 
Ahead of today’s sale of $62BN in 7Y paper, we tweeted that unlike this week’s previous absolutely stellar 2Y and 5Y auction which were only superb because traders were short cash bonds heading into the auction and needed paper to satisfy their short obligations, today’s auction was not at all special in repo suggesting the short overhang was far less which in turn meant that the auction would proceed purely on its fundamental, inflationary merits. I.e., it would be ugly.

7Y not special in repo. The streak of stellar auctions could end today as no scramble for cash bonds

We were right, and while it wasn’t nearly as ugly as the infamous February 2021 7Y auction which sparked the March market swoon and the surge in yields, it was still far uglier than this week’s previous coupon sales both of which stopped impressively through their When Issue,

Starting at the top, the auction stopped at a high yield of 1.461%, well above September’s 1.332% and the highest since January, but also tailed the When Issued 1.450% by 1.1bps, the first tail in any auction this week, and the 4th consecutive 7Y auction that tailed (it was also the biggest 7Y auction tail since March).

The Bid to Cover was completely unchanged, and right on top of September’s 2.245, below the six auction average of 2.316.

Overall, the auction was on the weak side with the headline numbers weaker than expected, however bidder participation metrics were more solid yet even so the yield on the 10Y spiked to session highs of 1.58%, prompted by more selling the moment algos saw the first auction tail of the week.