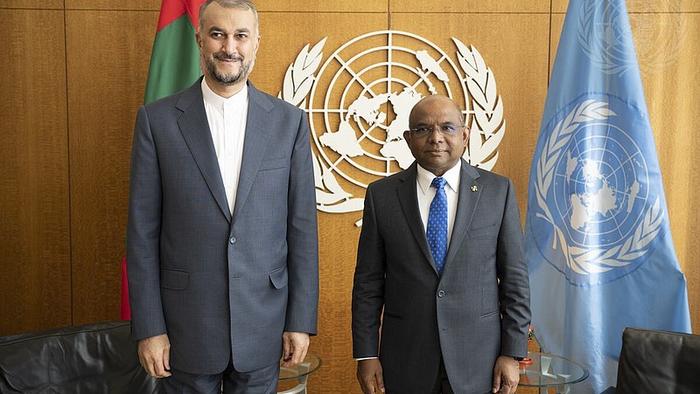 
After months of stalling and threats of walking away from nuclear negotiations which were last held in Vienna in June, there’s been a reported major diplomatic breakthrough between Iran and EU mediators in Brussels on Wednesday. Though not all parties have yet to confirm, the JCPOA nuclear talks are set to finally resume by the end of November.

Iran has in recent weeks signaled multiple times it’s willing to return to the Vienna process, which is aimed at reviving the 2015 nuclear deal which the Trump administration had pulled out of in 2018. Iranian leaders have consistently maintained that the US must immediately ease sanctions in order to show ‘good faith’ – given it’s Washington that unilaterally pulled out of the deal in the first place.

As AFP reviews, “Joe Biden has said he is ready to re-enter the agreement, so long as Iran meets key preconditions including full compliance with the deal whose terms it has repeatedly violated by ramping up nuclear activities since the US left the pact.”

Iran has seemed to use enrichment activity as leverage for negotiations with the West, with the International Atomic Agency (IAEA) this week observing greatly expanded activity at the Natanz Uranium Enrichment Facility:

Iran has taken another step to increase its enrichment activities in purifying uranium beyond 20 percent, Reuters reported Monday, citing a report by the International Atomic Agency.

The move at Iran’s Natanz plant is likely aimed at building knowledge of the refinement process, the report said, as the product from changes to centrifuges is not being kept.

The IAEA wrote in a report that “On 25 October 2021, the Agency verified that Iran began feeding (uranium hexafluoride gas) enriched up to 20% U-235 into a single IR-6 centrifuge in R&D line 2 at PFEP,” the IAEA said in its report.”

At the same time Tehran is further demanding the unfreezing of Iranian assets abroad: “(US President Joe) Biden has to put his goodwill into practice by for instance releasing $10 billion of Iran’s blocked assets,” Iranian Foreign Minister Hossein Amirabdollahian said recently on state TV.

This month Washington too has been making veiled threats which could serve to permanently derail Vienna talks. The Biden administration has recently agreed with Israel that “other options” will be pursued against Iran should Vienna talks fail – a clearly veiled reference to military action or else covert espionage.

Amid the global energy crunch and as oil futures continue climbing – on Tuesday hitting seven-year highs – the benchmark price edged lower Wednesday on news that Iran will return to the negotiating table, with futures in New York falling as much as 2.2% on Wednesday.