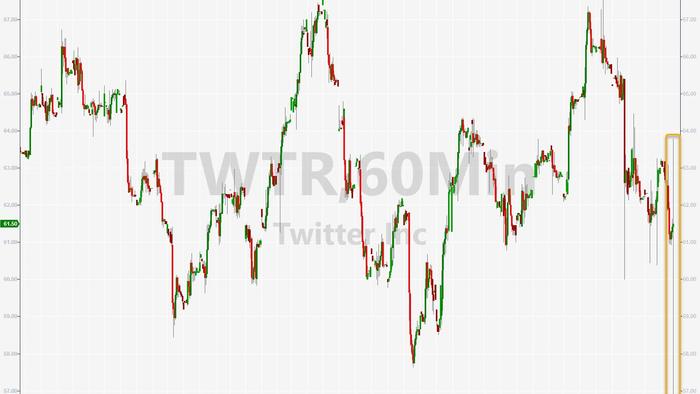 Because of the legal settlement (a one-time litigation-related net charge of $766 million related to an $809.5 million settlement the company announced in September for allegedly misleading investors about user growth), Twitter reported a net loss of $537 million, compared to a profit of $29 million a year ago.

TWTR dropped, then popped, then dropped back to unchanged, before a modest rally lifted it 1%…

The company said it’s expecting revenue, including the MoPub business, of $1.5 billion to $1.6 billion in the fourth quarter. Analysts were projecting sales of $1.58 billion on average, according to Refinitiv.

Additionally, the company says they expect similar user growth in the fourth quarter.

With regard to supply-chain issues, CFO Ned Segal told Bloomberg that it’s something Twitter is watching “closely” but that he thinks it will be “less of an issue” for Twitter given how advertisers use the service.

Finally, After Snap’s chaos, Twitter described the impact of Apple’s new privacy/tracking changes as “modest,” adding that the impact was “lower than expected.”