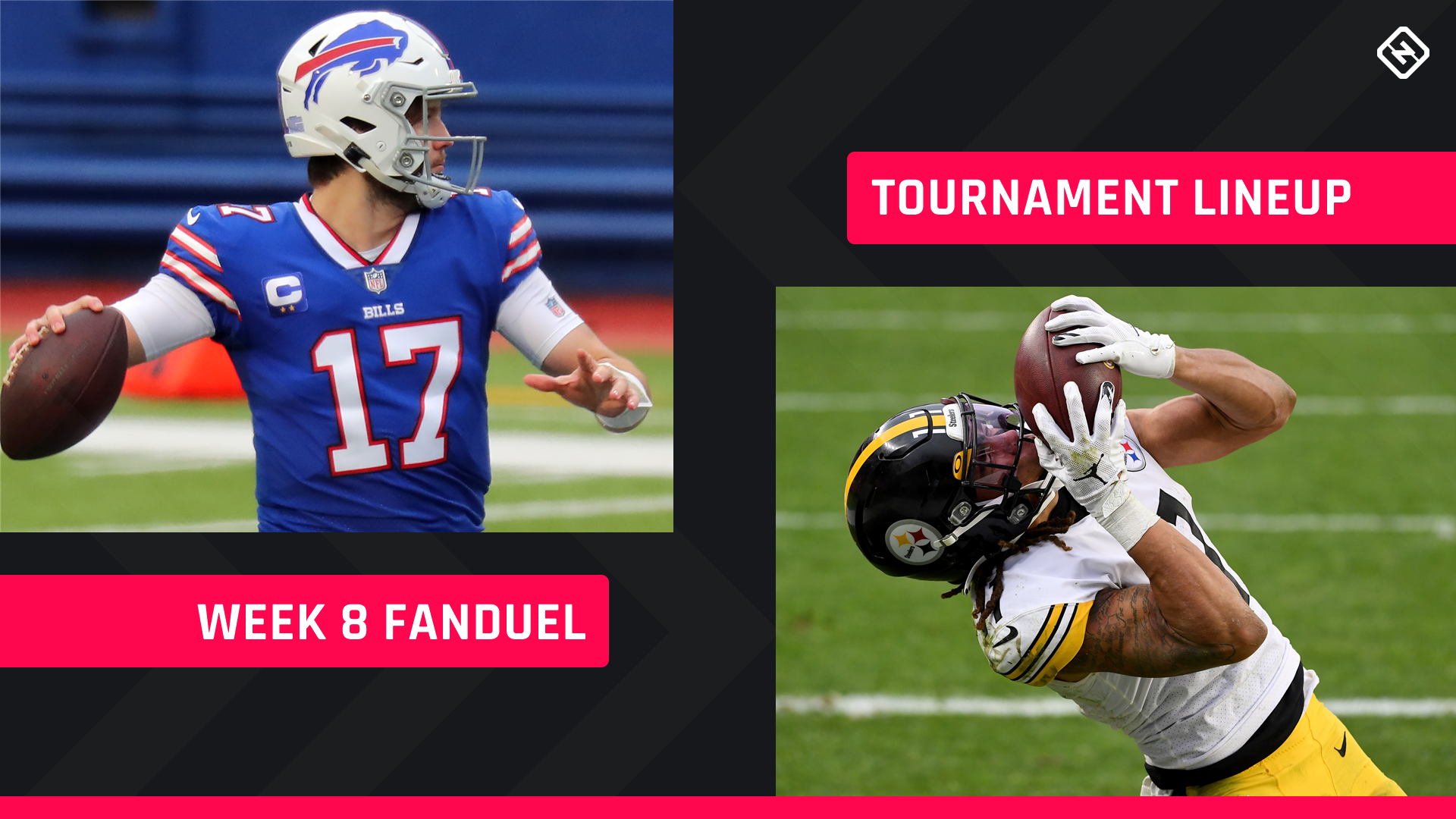 There are some heavy hitters absent from the main DFS slate, but the options are certainly more plentiful than last week’s bye-ravaged player pool. Our Week 8 FanDuel tournament lineup is looking to take advantage of situations where value players — in theory — have inherited expanded roles.  One such case is in Philadelphia where Miles Sanders appears headed for some missed time following an ankle injury that required him to be carted to the locker room.

As always, we’re also looking for players who aren’t going to be chalk plays since these are daily fantasy football tournaments, not cash games. Feel free to make your own adjustments, using our lineup as a guide for some of your picks.

QB Josh Allen, Bills vs. Dolphins ($8,800). In all sincerity, the Bills’ loss — and Allen’s failed fourth-down attempt — is a very appealing element of this selection. Sure, professional football players are competitive by nature, but Allen’s competitiveness goes above and beyond. It’s easy to envision Allen and Co. coming out with a little extra edge at home against a struggling division rival.

RB Jonathan Taylor, Colts vs. Titans ($8,500). Taylor’s 16.5 FanDuel points on Sunday night was his lowest output since Week 3 against the Titans, the same opponent he’ll run against this weekend. The third time will need to be the charm for Taylor, who has combined to score 12.4 FD points over his first two meetings with the Titans in his young career. While it’s only Week 8, this is damn close to a “must-win” spot for the Colts. We fully expect Taylor to be the focal point of the Colts’ offensive game plan and attack.

RB Cordarrelle Patterson, Falcons vs. Panthers ($7,300). Patterson continues to enjoy a breakout campaign and appears to have leapfrogged Mike Davis in the backfield pecking order. Patterson carried the ball 14 times on Sunday in addition to catching two passes on five targets. Meanwhile, Davis handled a grand total of four carries — and this wasn’t a situation in which the Falcons needed to erase a large deficit. The Panthers are a solid defense, but Patterson’s usage and price are too appealing to pass up this week.

WR Stefon Diggs, Bills vs. Dolphins ($7,300). Diggs has had a decent second season in Buffalo. He’s earned double-digit targets in four of six games and is coming off his best fantasy performance (19.4 FD points) of the campaign. Both wide receiver Emmanuel Sanders and tight end Dawson Knox (hand) have played well, allowing Allen to spread the rock around a bit. However, Diggs still owns a 26.3-percent target share, and with Knox out, that could actually go up this week. It won’t be a surprise to see him post a new season high this week in the fantasy scoring department.

WR Chase Claypool, Steelers @ Browns ($6,500). Those who expected a boost from Claypool in the wake of JuJu Smith-Schuster’s season-ending shoulder injury were let down in a big way by the 2.7 FD points he earned on seven targets against the Seahawks. The Steelers (hopefully) ironed out some of their offensive issues over the bye week and will be able to put Claypool in a position to deliver a big performance like the 5-130-1 line he hung on the Broncos in Week 5.

WR Jerry Jeudy, Broncos vs. Football Team ($6,000). Jeudy (ankle) is trending toward a return from the IR this week, and we’re eager to assume the risk for the potential reward. He was actually cleared to return for Week 7, but the Broncos exercised a bit of extra caution on a short week. It will be important to monitor this week’s practice reports and Jeudy’s status ahead of Sunday’s games, but it’s possible the Broncos’ conservative approach to his gameday activation will allow him to hit the field with less rust and fewer restrictions.

TE Dallas Goedert, Eagles @ Lions ($5,900). In Goedert’s first week without having to share with fellow tight end Zach Ertz, he turned five targets into a 3-70 line — not terrible, but not the eruption many had in mind. Don’t be discouraged by a ho-hum fantasy line. Goedert played 93 percent of the snaps, a season high by a wide margin, and he will likely find himself in a position to take more advantage of his expanded role in the coming weeks.

FLEX Kenneth Gainwell, Eagles @ Lions ($5,900). Our fingers are crossed that Gainwell doesn’t experience the same adjustment period as Goedert and Claypool. Starting running back Miles Sanders was carted off the field on Sunday with an ankle injury, and while the official prognosis awaits, the assumption is he’ll be absent this week. Gainwell is second among Eagles skill-position players with 45 touches and leads the group with three touchdowns. He’s done a lot of his work through the air (31 targets, 19 receptions) and has found pay dirt as a receiver and runner. If Gainwell is entrusted with an expanded role, he has the potential to deliver a Cordarrelle Patterson-esque performance in a great matchup against Detroit.

DEF Bears vs. 49ers ($3,700) The Bears were rated as a top-10 defense per DVOA prior to being annihilated by Tom Brady and the Buccaneers. However, more than stats and metrics, it’s important to consider the Bears’ brand and culture — they’re not a defense that gets shredded to that degree. They’re going to be roaring and raging to get back on the gridiron to flush last week’s humiliation out of their system. The 49ers look like a flawed offense that’s led by a mediocre quarterback and leans too heavily on two players — Elijah Mitchell and Deebo Samuel.