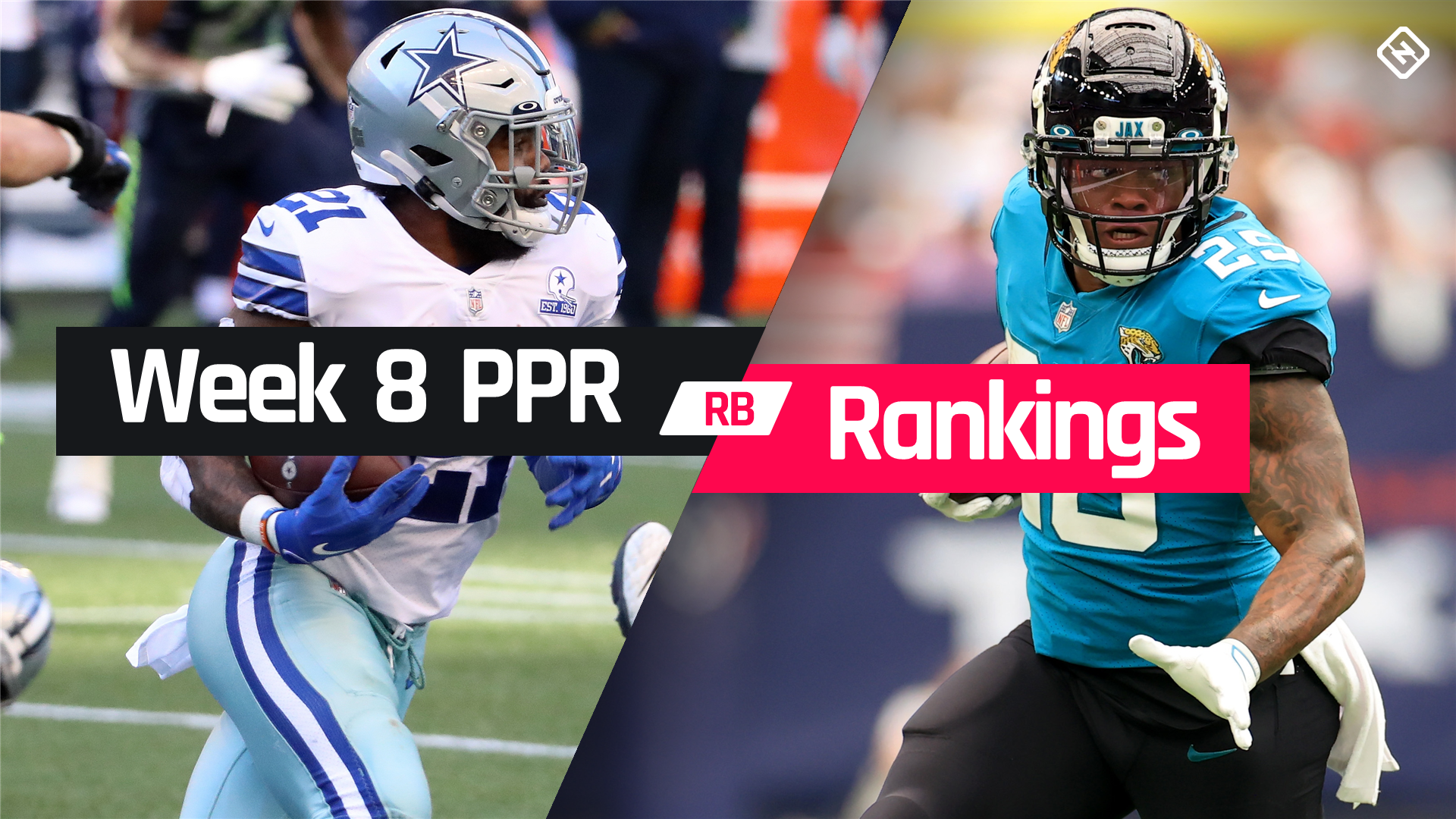 The Raiders and Ravens are on bye this week, but it’s likely fantasy football owners won’t miss their running backs too much. That’s especially true in point-per-reception leagues, where you couldn’t really count on any of their key RBs to catch passes in a given week. Nonetheless, our Week 8 fantasy RB PPR rankings are still without some notable backs because of injuries.

Unfortunately, Clyde Edwards-Helaire (knee), Chris Carson (neck), Christian McCaffrey (hamstring), and Kareem Hunt (calf) are all still on IR and can’t return this week, but we could be getting Saquon Barkley (ankle), Nick Chubb (calf), and David Montgomery (knee) back. Montgomery figures to remain out, but Barkley (@ Chiefs) and Chubb (vs. Steelers) both have shots to return.

They will be must-starts if they do come back, though Chubb would return to a less than ideal matchup. If he’s out, Week 7 hero D’Ernest Johnson will get another chance to lead Cleveland’s backfield, but he’s merely an RB2/flex against a solid Pittsburgh run defense. If Chubb is back, Johnson isn’t worth using outside of very deep leagues.

A couple backs who are usually much more valuable in PPR leagues — Chase Edmonds (vs. Packers) and Myles Gaskin (@ Bills) — both have tough matchups this week. Because of the PPR aspect, they still have some value, but they’re riskier than usual. Edmonds can hang his hat on the fact the Packers entered Week 7 allowing 5.5 catches per game to RBs (11th most), but total yards and certainly a touchdown could be tough to come by. PPR maestros Austin Ekeler (vs. Patriots), Cordarrelle Patterson (vs. Panthers), and Mike Davis (vs. Panthers) — all in the top 12 in RB receptions entering Week 7 — have tough matchups, too, but Davis is the only guy you can consider benching in either half-point or full-point PPR leagues.

There could be a lot of RB receptions in the Jets and Bengals game, as both teams ranked in the top three in RB receptions/game allowed entering Week 7. That gives a slight boost in value to Samaje Perine (@ Jets) and Michael Carter (vs. Bengals), but both are merely flex plays (at best). The Bucs, Cowboys, Eagles, Seahawks, Chiefs, and Dolphins all were giving up at least six receptions/game heading into Week 7, so give slight PPR boosts to borderline guys Jamaal Williams (vs. Eagles), Devontae Booker if Barkley is out (@ Chiefs), and Zack Moss/Devin Singletary (vs. Dolphins).

The Bills duo is one of several that’s tough to pin down. However, since both backs have some reception upside, they’re worthwhile RB2s given the highly favorable matchup. The same can’t necessarily be said for the Bears duo of Damien Williams and Khalil Herbert (vs. 49ers) or the Broncos duo of Javonte Williams and Melvin Gordon (vs. Washington), who face a WFT defense that’s been relatively good at limiting receptions to RBs (4.0 per game). The Broncos are even stingier themselves (2.7), which is bad news for J.D. McKissic. The 49ers give up a fair amount of RB receptions, so Herbert, who caught all five of his targets last week, can have his usual value.

Several borderline backs are in good spots based simply on the run defenses they’re facing. Damien Harris (@ Chargers), Darrel Williams (vs. Giants), and Kenneth Gainwell (@ Lions) should do well on the ground even if they don’t have a ton of catches. Tony Pollard (@ Vikings) is in a similar situation as a secondary back, with Brandon Bolden (@ Chargers) and Rashaad Penny/Alex Collins (vs. Jaguars) also poised to have at least flex value.

Fantasy RB PPR Rankings Week 8: Who to start at running back