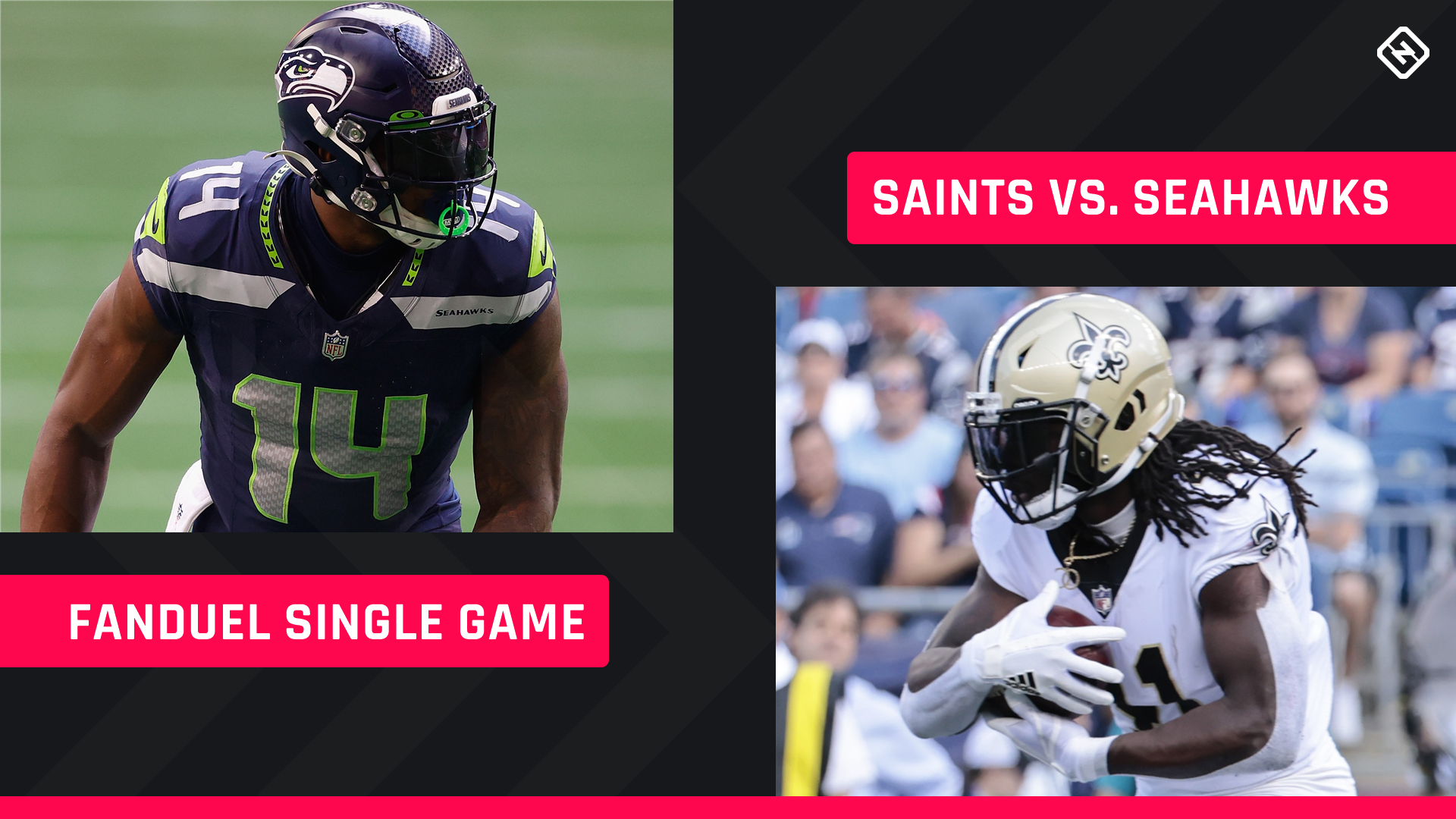 The Seahawks and Saints have had some fun matchups and iconic moments over the years. It will be up to Geno Smith and Jameis Winston to add another chapter to the storyline on Monday Night Football.  As usual, we’re taking an all-or-nothing DFS approach with our Week 7 FanDuel single game lineup, which is aptly named “Hail Mary.”

Here’s a reminder of FanDuel’s scoring system for single-game contests: The point total for the “MVP” is multiplied by 1.5, but he doesn’t cost any additional money like the “Captain” in DraftKings Showdown contests. FanDuel’s default scoring is half-point PPR and four-point passing TDs, and there are no bonuses for 300-yard/100-yard games like on DraftKings.

Kamara’s 109 touches account for 47.6 percent of the Saints’ offensive volume. The next busiest Saint is injured backup running back Tony Jones Jr., who’s handled the rock a paltry 23 times. Kamara also leads the team with four touchdowns, but it’s reasonable to expect him to be particularly busy in that department this week with quarterback Taysom Hill (four rushing TDs) ruled out with a concussion and Jones Jr. (ankle) on IR.

We’re going to fade the quarterbacks in favor of their playmakers. The odds of either Geno Smith or Jameis Winston erupting aren’t particularly favorable, but each could play well enough to carry a receiver or two. Metcalf is one of those receivers in spite of his modest 6-58 line in Smith’s first start. The two will presumably have an increased comfort level with one another, which could allow for an improved connection.

It’s been rough sledding for Lockett after a stellar start. After scoring 24.0 and 27.8 FanDuel points in Weeks 1-2, respectively, he has scored a total of 22.2 FD points over the past four games. Let his season-long investors fret. On a one-game basis, Lockett is an appealing inclusion at a modest price. The market is justifiably down on the volatile wide receiver, but that’s an opportunity to take advantage of low ownership across the slate.

Callaway has served as the lead receiver in Michael Thomas’ stead. He has just 21 targets, but that’s second on the team to Kamara. Playing Callaway here is a bet on efficiency. He averages a meaty 10.6 yards per target with a 61.9-percent catch rate. He’s not going to get many opportunities on Monday night, but the ones he does receive will come with big scoring potential. We’re swinging for the fences in these contests, so bring on the risk-reward profile in this spot.

Smith has been out all season due to a hamstring injury, but he returned to practice this week and has a chance to make his debut. Fellow receiver Deonte Harris landed on IR with a hamstring injury of his own, and he vacated 16 targets at 14.8 yards per look in the process. Those are opportunities that could be ticketed for Smith, who caught 34 passes on 50 targets for 13.2 yards per reception and a 68-percent catch rate in 2020. There’s upside in this spot for Smith if he’s activated. Be sure to double check his status before making your final lineup submissions. If Smith doesn’t play, you can pivot to kicker Jason Meyers, who should get some field-goal chances if the weather isn’t too bad. Worst cause, you could go with TD-or-bust option TE Gerald Everett.