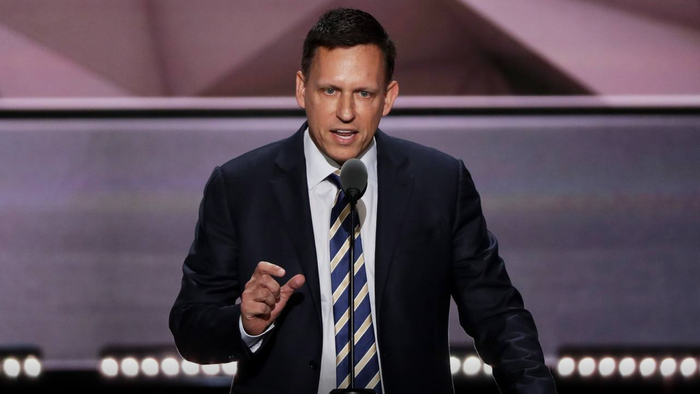 On October 31st, 2016, Peter Thiel delivered a speech at the National Press Club in the heart of Washington, just a few blocks away from the White House. In his prepared remarks, he articulated the case for Donald J. Trump, the Republican presidential nominee whose chances of winning the upcoming election against Hillary Clinton seemed all but nonexistent to the political establishment. But Thiel, always a contrarian, offered a radically different perspective. He argued that Trump voters weren’t crazy, and that the sentiments which fueled the candidate’s meteoric rise were the inevitable result of a country that had been run into the ground by decades of incompetence, misplaced priorities, and bubble thinking. The voters cast their ballots on November 8th, and the rest is history. Thiel was vindicated.

How is it that a Silicon Valley billionaire could have understood what scores of pollsters, consultants, and other industry insiders did not? Thiel’s political endeavors, after all, comprise only a fraction of his work. First and foremost, Peter Thiel is a venture capitalist and entrepreneur. And in the very same month that he gave a speech on Trump’s behalf at the RNC in Cleveland, Ohio, Thiel also bludgeoned Gawker Media out of existence and forced its founder into bankruptcy, exacting his revenge for outing him several years prior. But still, he somehow had a better read on the lives of everyday Americans than the pundit class, and in doing so made his peers look like arrogant buffoons.

In an interview with Walter Isaacson, Jeff Bezos said, “contrarians are usually wrong.” While Hillary Clinton’s infamous “basket of deplorables” slip encapsulated the Democratic nominee’s contempt for a vast portion of the American electorate, the Amazon founder’s swipe at Thiel speaks to the larger phenomenon that lead to Donald Trump’s rise.

This country’s ruling elites have known nothing but fattening wallets and expanding cultural influence for decades. But in addition to self-enrichment, they have gained unprecedented control over all of America’s treasured institutions, slowly but surely chipping away at ordinary people’s ability to have a meaningful say in how their Republic ought to be run. Having wrested power away from the general public and the government designed to serve their interests, the ruling class has internalized the mentality that they can do no wrong; anyone who challenges their infallibility should simply be ignored. So strong was this self-confidence in 2016 that, when one of their own dared to suggest that the elite consensus was completely untethered from reality, other members of the ruling class simply reassured one another that everything was still proceeding according to plan. When you replay the events of that fateful year from their point of view, it is hard to doubt that waking up on the morning of November 9th must have been uniquely terrifying.

Nearly five years after his bet on Donald Trump, Peter Thiel is making his biggest foray into the political arena yet. He has given twin contributions of ten million dollars to the United States Senate campaigns of J.D. Vance in Ohio and Blake Masters in Arizona, and he’s also thrown his support behind the likes of congressional candidates such as Joe Kent and Patrick Witt. No one can say for certain what these efforts will yield, but it is undeniable that Thiel seems determined to disrupt the American political landscape. If his endgame is merely to raise the profile of a strong crop of candidates and get them elected to federal office, the strategy seems to be working. The closely-vetted bunch is charismatic, competent, and strong on messaging, which poses a frustrating challenge to Republican and Democratic challengers alike. But Peter Thiel’s true ambitions are grander.

At the conclusion of his aforementioned National Press Club speech, Thiel spoke of then-candidate Trump ushering in “a new Republican Party, beyond the dogmas of Reaganism” and the birth of “a new American politics that overcomes denial.” The sentiment suggests that the project at hand is far more consequential than boosting a handful of impressive political outsiders. As the patron of an emerging movement within the Republican sphere, Peter Thiel is staging an effort to save the country. This is the dawn of Thielism as a political philosophy, which can be defined as follows:

A contrarian conservatism is one whose priorities and strategies diverge from the platform of the Republican establishment. While reigning in Big Tech, fixing the American university system, and addressing the decline of domestic manufacturing have all become points of conversation on the Right, Thielism emphasizes the need to address each of those problems substantively. Furthermore, it rejects the premise that we always have to subscribe to established methods when devising solutions to those problems. Protecting the American worker, for example, requires us to reassess the near-sacred status of free trade within Republican orthodoxy.

On a fundamental level, Thielism also rejects the doctrine of American exceptionalism. Why? Because it recognizes that America’s greatness cannot exist in rhetoric alone; it must be backed up with action, achievement, and honesty. What made us great in the past is worth celebrating, but simply assuming that some special national character will continue to buoy us into the future is ludicrous. We are still masters of our own destiny, but we can only reassert our national sovereignty if we become far more self-aware than we are today. This awareness requires us to take stock of our problems and begin solving them.

Every great movement has a founder, but the movement’s impact is inseparably linked to how much its adherents actually accomplish. If one espouses genius ideas but remains largely ignored, it’s not a movement at all. Fortunately, Thielism is reaching a critical mass on the legislative front, as candidates from Washington to Georgia position themselves to win seats in both houses of Congress next fall. But, as important as gaining an electoral foothold may be, it’s only one small part of the Thielist mission. The political dimension of the conservative movement must interface with the cultural dimension. And, most importantly, both politics and culture need to be responsive to the ever-present force of technology, which the Republican establishment has long ignored save for the purpose of generating funds for its campaigns. If leveraged correctly, technology of all varieties, not just digital, can become the space in which we finally reverse America’s decline.

But first, it’s critical to note that we can’t afford to get bogged down in the culture wars. Despite an avalanche of opposition to them, the facts of biology which have underpinned all of human existence and been fundamental to Western civilization remain true as ever. In engaging with debates over such obvious matters, we conservatives lock ourselves into a hopelessly defensive posture. It’s time to drop our shovels and refuse to dig ourselves in any deeper. The only way out of the hole we’re in now is to go up, and the only way up is to build.

This is not to say that we should outright ignore the state of our culture. To do so would be a grave mistake, as the work of preserving whatever fundamental truth and history we have left, reduced and diminished as they may be, remains an always important task. But, as many of us have come to understand already, the brand of conservatism to which we had subscribed up until this point has failed to conserve almost anything meaningful. The Thielist perspective on the matter is to filter out the distractions and devote energy to constructive, new endeavors that will serve our interests in tangible ways.

Towards this end, there are a practically infinite number of pathways which can be taken. Particularly promising are the areas of decentralized finance, human inhabitance of space, and developing new modes of transportation. The common denominator among these three examples is the usage of technology for our own purposes rather than letting it be wielded mercilessly against us. While the current ruling class controls all major institutions, a truly disruptive advancement within a domain beyond their influence will loosen their grip. Of course, artificial intelligence and robots do pose a challenge to the new conservative movement, as both have thus far hurt the American worker immeasurably in service to the globalist agenda. But those scores are not entirely settled, and there is still a chance to stave off the worst possible outcomes if we address both items with urgency.

Ultimately, Thielism seeks to return America to the state of definite optimism, which it has not experienced for some five decades now. Indefinite optimism—the “everything will be fine” mentality—has been the prevailing disposition of the ruling class since the dawn of the 1970s, and it was also the attitude of ordinary people until very recently. Today, most ordinary people aren’t optimistic. We are now in an era of indefinite pessimism, where things are just expected to get worse. And as much as we want to believe that the present storms will pass, a prolonged period of indefinite pessimism will eventually lead to collapse unless things change. A course correction is needed if we are to have any hope of keeping the Republic.

Getting the compass reoriented back towards the ideal, definite optimism, means we need to provide concrete proof that the future will be better than the past. It means overcoming the blackpill, once and for all. It means harnessing the power of technology, which is supposed to improve our quality of life, and actually reaping its benefits. It means reclaiming the American Dream and using the government which exists to protect it in an effective, efficient manner.

In beginning this project, I hope to play a small role in commentating on emerging developments within the conservative movement. It is abundantly clear that we need to take this country back, and doing so requires a worldview that looks beyond the tired solutions of the past to face the future, unafraid to acknowledge the many challenges before our nation today. With the same firm reliance on the protection of divine Providence as our forebears, let us go forward to create and build a better tomorrow for ourselves and for America.