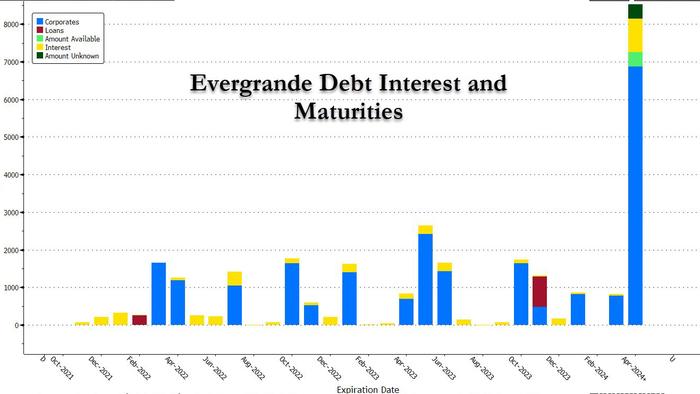 
In a surprise 11th hour development, China Evergrande made an overdue interest payment to offshore bondholders, the state-owned Securities Times reported Friday, an unexpected move that allows the property company to postpone – if not avoid – a default.

The Chinese property developer sent $83.5 million to the trustee for the dollar bonds, and that financial institution will in turn pay bondholders, reported the Securities Times which is run by the Communist Party’s flagship People’s Daily newspaper. As reported earlier, this weekend was the deadline for a 30-day grace period before bondholders could send a notice of default to the company after it failed to make the interest payment on about $2.03 billion of dollar bonds on Sept. 23.

A default by Evergrande – which is China’s 2nd biggest developer and its most indebted, and which late last week made a payment on onshore bonds – would have spiraled into the biggest corporate default in Asia, as it would also enable creditors to declare cross-defaults on some of Evergrande’s other debts. However, with its liquidity effectively frozen, its real estate sales plunging 97%, and its asset sales attempts a dead end, while Evergrande may have kicked then can this time, the company – which has the equivalent of more than $300 billion in total liabilities, including some $89 billion in interest-bearing debt as of the end of June – is still facing a virtually certain default in the coming weeks when many more coupons and maturities come due.

Most international bondholders had expected Evergrande to fail to make its dollar bond payments before the end of the grace period. The company has also skipped other coupon payments in the past few weeks, and has outstanding dollar debt with a total face value of about $20 billion. Advisers to international bondholders said this month they had made little progress in their efforts to engage with Evergrande.

On Wednesday, however, the Shenzhen-headquartered group said in a regulatory filing that it will “use its best effort to negotiate for the renewal or extension of its borrowings or other alternative arrangements with its creditors.”

As also reported earlier, Evergrande has been trying to raise funds by liquidating assets such as stakes in subsidiaries and a Hong Kong office building that it owns. The company had also planned to sell a majority holding in its property-management unit for the equivalent of about $2.6 billion to a smaller rival, but said this week that it had terminated that deal. The news of the failed deal sent Evergrande stock tumbling on Thursday after it was unhalted after three weeks of being frozen.

In retrospect the “unfreezing” may have been a signal that at least this one payment was about to be made.

Evergrande’s Hong Kong-listed stock has lost more than 80% of its value this year and its dollar bonds are trading far below face value, indicating skepticism among investors that they will be repaid in full. On Friday, the shares rose 5% in early trading, even as its bonds were still at deeply distressed levels indicating investors still expect the company to ultimately default.

Some analysts were pleasantly surprised by the decision to make the offshore bond payment. Hans Goetti, founder and chief executive officer of HG Research, said that the payment is good news for foreign bondholders and signals authorities want to avoid the issue from spreading.  The payment “goes a long way to alleviate these fears because usually the foreign bondholders would probably be the ones holding the bag under normal circumstances”, Goetti told Bloomberg TC.

It appears that Chinese authorities are “behind all this to make sure that we can avoid a spillover into the broader economy and also outside of China” he said adding that “this sends a signal that China is not interested in making this a bigger issue, especially for foreign holders in this case. I think that’s good news.”

Others, however, were more realistic. As Justin Tang of United First Partners said, “we have seen this before” and this “does not solve the company’s problem and does not change the fact that it is the living dead.”

“Evergrande is a candle burning on both ends, it needs to address declines in revenue and at the same time find cash for looming repayments. Nothing short of a restructuring or white knight will do.”

Below are several other kneejerk responses to the Evergrande news, compiled courtesy of Bloomberg:

Finally, while Evergrande may have averted a default in the last minute, it has only kicked the can for a few weeks as the following distribution of debt interest and maturity payments shows.