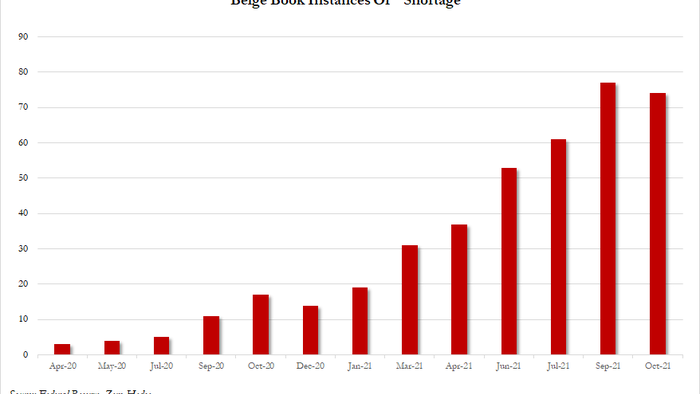 
October’s Beige Book was headline by the utterly useless comment that “economic activity grew at a modest to moderate rate” that has come to reflect the snoozey name of the report. However, this report had more than its share of issues including most districts seeing “significantly elevated prices”, “low supply of workers” amid high demand, and high worker turnover.

Somehow the use of the word “shortage” declined in October…

Have we really seen “peak shortage”?

As The Fed details below (emphasis ours):

Economic activity grew at a modest to moderate rate, according to the majority of Federal Reserve Districts. Several Districts noted, however, that the pace of growth slowed this period, constrained by supply chain disruptions, labor shortages, and uncertainty around the Delta variant of COVID-19. A majority of Districts indicated positive growth in consumer spending; however, auto sales were widely reported as declining due to low inventory levels and rising prices. Travel and tourism activity varied by District with some seeing continued or strengthening leisure travel while others saw declines that coincided with rises in COVID cases and the start of the school year. Manufacturing grew moderately to robustly in most parts of the country, as did trucking and freight. Growth in nonmanufacturing activity ranged from slight to moderate for most Districts. Loan demand was generally reported as flat to modest this period. Residential real estate activity was unchanged or slowed slightly but the market remained healthy, overall. Reports on nonresidential real estate varied across Districts and market segments. Agriculture conditions were mixed and energy markets were little changed, on balance. Outlooks for near-term economic activity remained positive, overall, but some Districts noted increased uncertainty and more cautious optimism than in previous months.

Employment increased at a modest to moderate rate in recent weeks, as demand for workers was high, but labor growth was dampened by a low supply of workers. Transportation and technology firms saw particularly low labor supply, while many retail, hospitality, and manufacturing firms cut hours or production because they did not have enough workers. Firms reported high turnover, as workers left for other jobs or retired. Child-care issues and vaccine mandates were widely cited as contributing to the problem, along with COVID-related absences. Many firms offered increased training to expand the candidate pool. In some cases, firms increased automation to help offset labor shortages. The majority of Districts reported robust wage growth. Firms reported increasing starting wages to attract talent and increasing wages for existing workers to retain them. Many also offered signing and retention bonuses, flexible work schedules, or increased vacation time to incentivize workers to remain in their positions.

Most Districts reported significantly elevated prices, fueled by rising demand for goods and raw materials. Reports of input cost increases were widespread across industry sectors, driven by product scarcity resulting from supply chain bottlenecks. Price pressures also arose from increased transportation and labor constraints as well as commodity shortages. Prices of steel, electronic components, and freight costs rose markedly this period. Many firms raised selling prices indicating a greater ability to pass along cost increases to customers amid strong demand. Expectations for future price growth varied with some expecting price to remain high or increase further while others expected prices to moderate over the next 12 months.