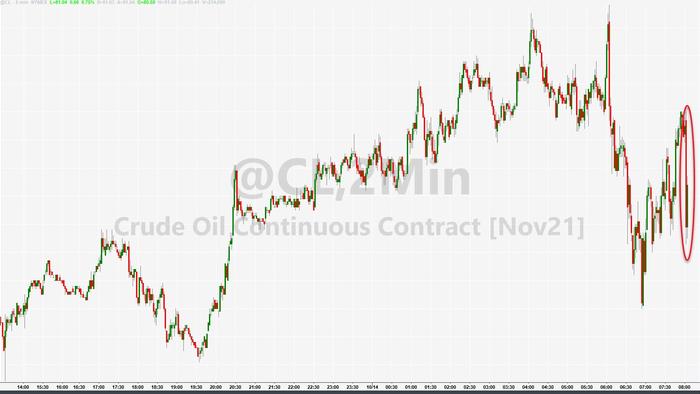 US Crude production continued to rebound, almost back to pre-IDA levels…

WTI hovered around $81.20 ahead of the official DOE print but slid back below $81 on the big crude build…

Bloomberg’s Michael Jeffers notes that retail fuel prices are at a seven-year high and the 3-2-1 crack is trading at levels normally seen in the summer during peak driving season. That’s probably one reason that refiners are running to close to 90% during a time of year when they usually shut for maintenance.

Diesel demand is highest it’s been since 2018 for this time of year. At the same time stockpiles are lower than usual ahead of winter due to a combination of trucking demand natural disasters that forced refineries to shut down for extended outages earlier this. More distillates are expected to be used for heating this winter due to surging natural gas prices.

Bloomberg Intelligence Energy Analyst Fernando Valle notes that divergence in gasoline and diesel trends appears poised to extend in coming weeks, we believe, amid lingering energy-supply concerns in Europe and Asia, which may spur diesel-buying as an insurance policy. But port congestion in the U.S. and China are a headwind for diesel, as shipping demand is thwarted by impacts on trade. Ongoing consumer-price inflation may start to hurt gasoline demand, adding to the effects from an end to the busy summer season. Refinery maintenance may help balance supply, but we still expect to see some buildup in coming weeks, especially for gasoline.