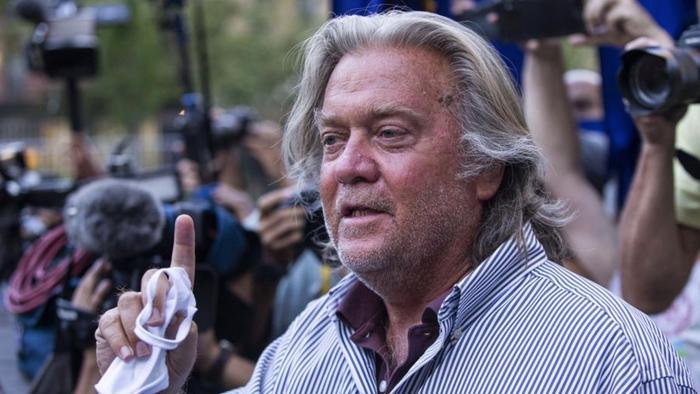 
Former Trump campaign chief and White House Chief Strategist (if only for a brief while) Steve Bannon is bracing for another round of criminal charges after refusing to participate in Nancy Pelosi’s committee investigating the events of the Jan. 6 “storming of the Capitol” (as Pelosi’s fond of describing it). Even though he had nothing to do with organizing the event or participating in it, Bannon was subpoenaed by Congress to appear before the select committee on Thursday.

This decision not to show up, a clear message of contempt that Bannon’s political fans will undoubtedly appreciate, could land him behind bars as the Dems are already pursuing criminal charges against the former Trump insider.

The Jan. 6 committee has already set a vote for recommending criminal contempt charges. According to the AP, if the House votes to recommend the contempt charges against Bannon, the DoJ will likely decide to prosecute – though there’s a chance it could pass. Bannon has – like many Trump insiders before him – cited executive privilege as his reason for ignoring the subpoena (although he wasn’t working for the president at the time).

On Thursday, the committee demanded Bannon turn over documents and testimony due to the fact that he was allegedly in touch with President Trump before the demonstration at the Capitol got out of hand.

Bannon’s lawyer said his client didn’t appear at the hearing due at the insistence of President Trump.

Members of the committee told the AP that they wouldn’t stand by and tolerate Bannon’s rebuke.

“The Select Committee will not tolerate defiance of our subpoenas, so we must move forward with proceedings to refer Mr. Bannon for criminal contempt,” Thompson said in a statement.

Democrats aren’t simply going after Bannon because they believe he did something wrong; they’re going after him because they want to restore the integrity and legitimacy of Congressional subpoenas after they were routinely ignored and flouted during the Trump Administration.

There’s a chance Bannon might not be the only one to face criminal contempt charges. Mark Meadows and Dan Scavino are set to testify on Friday. Whether they plan to show up isn’t exactly clear.

19 subpoenas have been issued so far as the Dems hope to arrange their little show trials on the Hill, loaded with ‘symbolism’ and driven by the spirit of ‘social justice’.

They’d be doing the whole country a favor though by just dropping this whole mess and moving on.

Why Is Solana ($SOL) Going Up While Other Major Cryptos Slump? | Benzinga