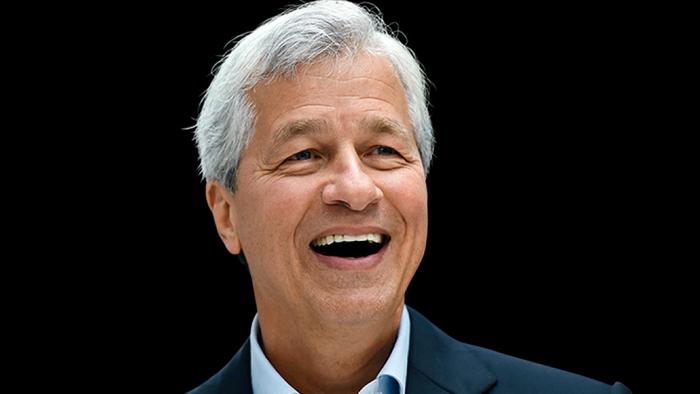 
JPMorgan officially launched Q3 earnings season in typical style, by reporting results that beat on the top and bottom line. Specifically, the company reported  EPS $3.74, which beat estimates of $2.97 and was 82 cents above the $2.92 year ago, however much of this was thanks to another sizable reserve release of $2.1BN. It was, however, the lowest EPS quarter in the past four.

A summary of the company’s results is below.

“JPMorgan Chase delivered strong results as the economy continues to show good growth – despite the dampening effect of the Delta variant and supply chain disruptions,” Jamie Dimon CEO said in a statement.

Starting at the top, the company reported a total $2.1 billion in reserve releases,  which mostly came from the Credit Card ($0.9BN) and Wholesale businesses ($1.2BN), leaving JPM with a total allowance for credit losses of $20.5 billion. Net of $0.5BN in charge-offs, or about half the $1BN expected…

… the company’s total credit loss recovery in Q3 was $1.53 billion vs. a provision $611 million. This was the smallest in the past four quarters.

Going straight to the company’s main profit driver, the Corporate and Investment Bank division, we find Revenue of $12.396BN, up $850MM or 7% from a year ago but down $818MM from last quarter. On the trading side, it was the equities desk that held up better than fixed income: equities revenue came in at $2.6 billion, 20% more than the estimate, which was already a solid increase year-over-year. Fixed income came in just light of the forecast mark at $3.7 billion, marking the sharpest decline in the major business lines in the investment bank. And while Markets revenue dipped 5% YY tp %6.3BN, Investment Banking revenue was up a solid 45% Y/Y to $3.0BN. Some more details

While markets were down, IB revenue of $3.0B, was up… way up some 45% YoY. IB fees soared 52% YoY, driven by higher advisory and equity underwriting fees.

In total, Investment Banking Revenue of $3.29BN came in well above the $2.739BN consensus estimate, largely on the bank of advisory revenues which almost tripled in the third quarter.

On the cost side, expenses of $5.9B were relatively flat YoY, as higher structural expense, volume- and revenue-related expense and investments, including technology and front office hires, were offset by lower legal expense. The company also reported a net credit benefit of $638mm, driven by a net reserve release.

Away from the bank’s investment bank and corporate businesses, the bank’s Net Interest Income missed forecasts marginally, coming in at $13.08 billion versus consensus of $13.19 billion, translating into a yield on interest-earning assets 1.62%, missing estimates of 1.65%. This, as Bloomberg notes, is one of the key data points investors were watching for signs of a return to growth but so far not so good.

Another area of concern is that loan growth remains elusive: JPM’s consumer and community bank saw loans fall 2% year-over-year, a drop which Dimon blamed on “continued elevated prepayments in mortgage” and PPP forgiveness. Loan growth looked even weaker for the commercial bank, with average loans down 7% to $203BN from this time last year. Offsetting this, average deposits of $301BN rose 21% Y/Y. This even as total loans rose 6% Y/Y.

Here’s the breakdown: Commercial and industrial lending, or C&I, dropped 11% versus last year and fell 3% in the quarter (including PPP loans). Commercial real estate lending fell 3% for the year and was flat quarter-over-quarter.

Meanwhile, at the corporate level, total loans did rise 5% Y/Y (and 2% Q/Q) to $1 trillion but once again this was not nearly enough to catch the surge in deposits which increase 19% Y/Y To $2.4 trillion. The balance, as we have discussed before, is entirely due to QE with the bank’s balance sheet serving as a parking slot for Fed reserves in the form of deposits.

On a separate note, Bloomberg noted that JPMorgan’s headcount rose 4% in the last year, ending the third quarter at 265,790. Wells Fargo is known as the bank with the largest workforce in the country – but it ended the first half of the year with about 259,196 (and they’ve been cutting employees left and right). So the US may now have a bank with the biggest workforce.

In response to the news, JPM stock initially kneejerked higher but has since faded much of the gains and was largely unchanged on the report.

Who were the biggest snubs on the NBA 75 team?

The day Chuck Hughes died: Remembering the only NFL player to die in a game