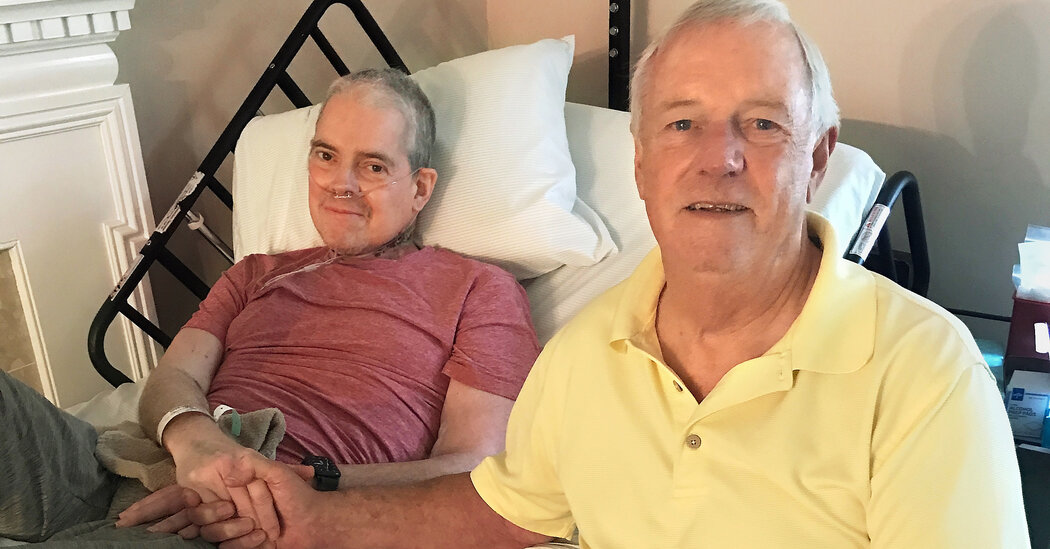 
FALLS CHURCH, Va. — Three weeks before he died, Sam Anthony, 52, mailed his last wishes to a man he had never met.

He was dying, he wrote in a letter postmarked Aug. 2, of an aggressive cancer in his mouth and throat that he had been struggling with since 2005. He enclosed a copy of a college alumni magazine article about his high-ranking job at the National Archives. He was writing, he explained, because the two men shared ancestors, a fact he had learned from DNA matches and public records.

He had recently learned that his biological father’s name was Craig Nelson.

“I am wondering,” Mr. Anthony wrote, “if you are that Craig.”

In Green Valley, Ariz., on Aug. 9, Mr. Anthony’s letter found its way into the hands of a 78-year-old retired airline worker.

Craig Nelson’s first thought, holding the envelope and seeing the return address, was that he didn’t know anybody in Falls Church, Va. Then he read the contents.

And started to tremble.

It had been decades since Mr. Nelson had given up hope of finding the biological son he fathered near the end of his military service as an Army medic at Fort Bragg in North Carolina.

“Fifty-two years, that’s a long time to try to carry around a memory,” Mr. Nelson said. “Especially when you didn’t have a memory to begin with.”

All he had ever known of the baby was what the mother told Mr. Nelson in a brief, long-distance phone call in 1969: It was a healthy birth and she had already given him up for adoption.

Now, in neatly typed, single-spaced, Times New Roman paragraphs, that cipher of a son — that emptiness — was speaking to him in a man’s voice. A dying man’s voice.

Mr. Anthony wrote that he realized “this letter may come as a shock to you, and I do not wish to upset anyone’s life.”

“My hope is to view photographs and to learn of my family medical history,” he gently pleaded. “I am open to contact with biological relatives but do not want to intrude.”

Mr. Nelson picked up the phone. He called the number Mr. Anthony had provided.

Mr. Anthony was in surgery to clear a blood clot. The call went to voice mail.

On the recording he left, Mr. Nelson, normally a leisurely talker, spoke fast, hurried by nerves and excitement.

“Well, hello, Sam, this is Craig out in Arizona that meets all the requirements in your wonderful letter,” he said. “I would love to talk to you, so I will try again when the time is better. I’m doing fine.”

Thus began a relationship in which two men tried to make up for 52 years of lost time.

The letter transported Mr. Nelson back, back, back — to before his retirement, before his moves to Honolulu and then Arizona, before his two marriages that ended in divorce, before the birth of a daughter in 1972, before his return to civilian life as an equipment and baggage loader for United Airlines at the airport in Portland, Ore., his hometown.

It transported him all the way back to the late 1960s, and the year or so he spent tooling around North Carolina in his 1952 Morgan, a sporty, red English two-seater, with a young woman he had met at a dinner party near Fort Bragg.

He enlisted in the Army at age 23 in March 1966, hoping he would receive better training than draftees. He made sergeant and spent his three-year hitch training medics.

Then, with his military service nearing an end, his girlfriend informed him she was pregnant.

Their recollections of what happened next are at odds, perhaps not surprisingly given the passage of time and the ways people try to move on.

She says Mr. Nelson offered to move in with her but not marry her. He says he proposed marriage but she refused, saying she wanted to place the baby for adoption so she could finish school.

Upon his discharge in March 1969, Mr. Nelson returned to Oregon and moved in with his parents.

She traveled to Lynchburg, Va., spending the final weeks of her pregnancy in a home for unwed mothers, desperate to keep the baby a secret from her friends, her classmates and her father.

Reached by phone, she insisted on anonymity, saying she did not wish to disrupt her life by revealing to family and friends that she had a child out of wedlock. Only her mother knew, she said. Her father died never having learned.

Mr. Nelson had settled back into his parents’ home in civilian clothes when he happened to be at home to answer the phone one day. It was his ex-girlfriend.

In the next breath, however, she informed Mr. Nelson that he would never be able to be a father of any kind to the baby. She had already given the boy up for adoption and he, as the father, would learn no more about his son.

Mr. Nelson and his parents consulted lawyers and adoption officials in Portland, only to be told that fathers had next to no rights when mothers chose to give up their babies for adoption.

Eventually, he acquiesced. “I thought it was fruitless,” he said. “That’s the way things were, then. I believed what I was told by the powers that be.”

To cope with the loss of a son he knew existed but had never seen, Mr. Nelson tried not to think about it.

That was impossible. “Things would trigger it,” he said. “Mentioning North Carolina, that would do it.”

In time, those feelings of torment resolved themselves into a selfless, consoling wish: “I hope he gets a decent home.”

About 2 percent of Americans are adopted, but there is no data on the number who search for biological relatives, said Adam Pertman, president of the National Center on Adoption and Permanency.

“How many adopted people search for their birth parents?” he said. “All of them do.”

Yet Mr. Anthony never had.

“He felt like he had a great life with the parents who raised him,” his wife, Sharon Ellis, said.

Mr. Anthony grew up in Wilmington, N.C., where his mother was a homemaker and his father was a French horn-playing neurosurgeon. His sister was also adopted.

A competitive soccer player in high school, Mr. Anthony studied history at the University of North Carolina, and landed a job out of college at the National Archives and Records Administration as a technician in the textual and microfilm research room.

He rose to become the special assistant to the archivist, making him a public face of the institution and giving him responsibility for selecting the gifts that presidents bestowed upon foreign dignitaries.

He showed off copies of the Constitution and Declaration of Independence to thousands of schoolchildren and gave private tours to Prince Charles, pop stars and professional athletes. He led the agency’s lecture program, appeared regularly on C-SPAN, created virtual tours and once slept on the floor of the National Archives rotunda to test the room’s noise level.

His mother died of A.L.S. in 2000. It was only after his father died of complications from heart surgery in 2016 that Mr. Anthony began to wonder about his biological parents.

A colleague, Debra Steidel Wall, the deputy archivist of the United States, worked alongside Mr. Anthony for 30 years. The No. 2 official at the 2,800-person agency, she is also an amateur genealogist. Her father was adopted, and Ms. Wall tracked down his biological parents and connected with cousins she hadn’t known of.

Every so often, she renewed her standing offer to Mr. Anthony to help him find his birth parents. In September 2020, he agreed.

That October, he sent her a two-page letter introducing himself, informing her of his cancer diagnosis and sharing his hope to learn about his family medical history.

Several days later, he answered a call from a blocked phone number.

“How did you find me,” a woman asked in a thick Southern accent, “and who else knows?”

She spoke with Mr. Anthony for nearly an hour, she said. They discussed his childhood in Wilmington, his parents, his career and his struggle with cancer, which had already weakened his voice so much that it was difficult to understand him.

He asked if they could stay in touch. She said she would have to think about it. She did not give him her phone number. She never called him again.

Their one conversation did give Mr. Anthony a vital piece of new information: His father’s name was Craig, his middle initial was H, and his last name might be Nelson, but she wasn’t certain.

But Mr. Anthony dithered for months about contacting his biological father. He couldn’t bear another rejection.

In April, he attended his daughter’s wedding in a wheelchair, a U.N.C. blanket over his legs. His voice had become little more than a rasp. He joked that he sounded like Darth Vader.

In mid-June, Ms. Wall helped him draft the letter to Mr. Nelson. But he held off sending it.

By the end of July, he was confined to a hospital bed in his living room.

Finally, on July 31, he signed the letter. Ms. Wall sent it by Priority Mail on Aug. 2.

His girlfriend, Pat Boeck, immediately began packing their things in her Subaru Forester. They left the next morning, their Shih Tzu in the back seat.

Four days and nearly 2,300 miles later, Mr. Nelson and Ms. Boeck pulled up to Mr. Anthony’s home in Falls Church on the afternoon of Aug. 14.

Mr. Anthony’s wife and daughter greeted them in the front yard and showed them inside to the living room.

“Well, hello there,” Mr. Nelson said. He asked Mr. Anthony if he could hug him.

The three women left the two men alone to talk.

It was nearly impossible for anyone but Mr. Anthony’s wife and daughter to understand his speech. But some things required few words.

Both had been six feet tall and just under 200 pounds at the peak of their vigor.

Ms. Ellis noticed that their heads were the same shape.

Both tended to end their sentences with “sir” or “ma’am.”

Mr. Anthony listened, nodded, smiled and squeezed Mr. Nelson’s hand. Mr. Nelson did more of the talking — about his soldiering days, his job at the airports and his brother Bob, who died of prostate cancer at 49.

He pulled from his wallet a tattered old snapshot of him in his Army uniform, proudly towering over his red Morgan convertible.

And Mr. Anthony showed photos of himself with Presidents Barack Obama and George W. Bush.

It occurred to Mr. Nelson that Mr. Anthony’s life had turned out richer and fuller than it would have with him.

Mr. Nelson told Mr. Anthony he wanted him to know that he hadn’t abandoned him.

His son nodded and smiled.

More and more, Mr. Anthony slept, with Mr. Nelson sitting beside him.

When Mr. Anthony awoke, Mr. Nelson tried to hold himself together.

“I didn’t want him to see me emotionally crying and thinking of all the years that went by that we could have been at least talking,” Mr. Nelson said. “It was a combination of the saddest moments of my life, but also the proudest.”

On Aug. 18, Ms. Boeck packed the car again, and Mr. Nelson quietly told Mr. Anthony that he would see him in heaven.

They were somewhere on Interstate 70 near St. Louis on Aug. 20, Mr. Nelson at the wheel, when Ms. Boeck’s phone rang. It was Mr. Anthony’s colleague, Ms. Wall.

She told Ms. Boeck, and then Ms. Boeck told Mr. Nelson, that Mr. Anthony was gone. Knowing that the sense of hearing is among the last to go, his wife had put on the latest episode of “Ted Lasso,” the show about a relentlessly upbeat soccer coach. It was a favorite of her husband’s. He died before the episode was over.

Mr. Nelson kept driving. He held it together until that night.