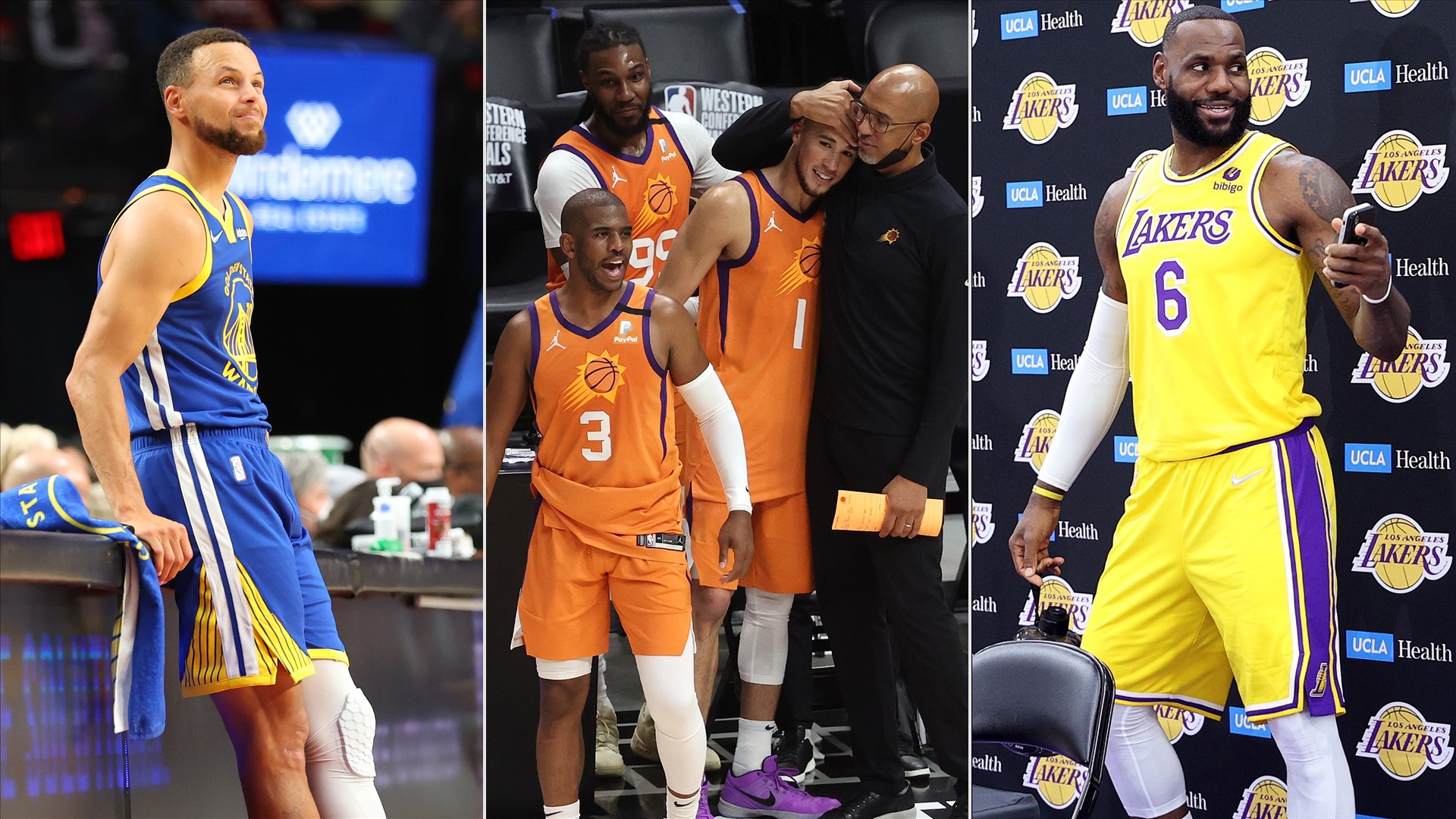 
The 2021-22 NBA regular season is set to tip off on Oct. 19 and in the weeks leading up to Opening Night, we’re previewing each division in the NBA.

Here, you can find projected win totals, predictions on the best player and best rookie, under the radar storylines to follow and a bold prediction among the five teams.

Today, the focus shifts to the Pacific Division.

Prior to the high ankle sprain that effectively derailed Year 18, LeBron was averaging 25.8 points, 8.1 rebounds and 8.0 assists per game for the Lakers and was a frontrunner to win his fifth MVP award. After he went down, things went downhill for the Lakers, eventually resulting in an appearance in the league’s inaugural Play-In Tournament which ultimately led to the first-ever first-round exit of James’ career.

Knowing what we know about LeBron, he’s sure to come back with a vengeance in the 2021-22 season.

Conventional wisdom must always go out of the window when talking about James, who remains in the discussion of being the league’s best player ahead of his age 37 season. That is far from normal.

Of course, there is plenty of talent in the division with Warriors superstar Stephen Curry coming in at a close second, while Kawhi Leonard would be in the conversation had it not been for offseason surgery to repair a partially torn ACL suffered in the 2021 NBA Playoffs.

That said, it’s still LeBron and it will continue to be LeBron until further notice.

Sacramento got it right in drafting the man that is referred to as “Off Night” because of his defensive pedigree.

As a 23-year-old rookie, Mitchell, who won a national championship at Baylor last season, brings with him experience and an attitude that can help the Kings franchise begin to reverse its misfortune over the last 15 seasons.

He’s strong, he’s poised and more than anything, he’s a nightmare for anyone he’ll be matched up with.

Mitchell put his clamps on full display during the NBA Summer League in Las Vegas, and while the task gets much tougher in the Western Conference against the likes of Curry, Damian Lillard and Chris Paul, among others, he’s definitely not one to back down from a challenge.

In bringing an edge, Mitchell can help expedite a much-needed culture shift in Sacramento and as a player who also shot 44.7 percent from deep last season, he can also benefit from playing alongside the speedy De’Aaron Fox and the crafty Tyrese Haliburton.

Golden State’s rookie duo of Jonathan Kuminga and Moses Moody will be solid in spots, but their fluctuating roles on a win-now team leads me to believe that it’s Mitchell who will show just why he’s the Pacific’s best rookie in 2021-22.

Right now, the majority of Warriors talk revolves around the Splash Brothers, from how Curry will follow up a historic 2020-21 campaign to the highly-anticipated return of Klay Thompson, who has missed the entirety of the last two NBA seasons with injuries.

But don’t let that distract you from how this roster has taken shape over the past two years.

Upon Thompson’s return, the Warriors will have one of the league’s most solid rotations that could be greater than 10 deep. The big names are obvious, as Draymond Green is a former Defensive Player of the Year and one of the smartest players to play the game, while Andrew Wiggins is a former No. 1 overall pick who can score 20 points in his sleep.

This offseason, they brought back a savvy veteran in Andre Iguodala, added Otto Porter Jr. in arguably the offseason’s best bargain deal and also brought in Avery Bradley and Nemanja Bjelica, two veterans who are very much capable of contributing to a playoff team.

From there, you can see just how well Golden State has identified and drafted talent over the years, with Kevon Looney serving as a mainstay in the frontcourt, Jordan Poole coming into his own as a lethal scorer off the bench and the team’s three most recent lottery picks in James Wiseman, Kuminga and Moody oozing with potential.

By that count, that’s 12 players, and that’s not including Juan Toscano-Anderson, who has found himself excelling in a Draymond-lite role and adds his own edge to the team as a native of Oakland.

Any given night, the Warriors can roll out the personnel to contend with a number of the league’s best.

It might feel like five years have passed, but we’re actually just two years removed from George finishing third in voting for league MVP and Defensive Player of the Year honours.

He was that good.

As Kawhi rehabs to return from offseason surgery, the fate of the Clippers rests on the shoulders of George, who has an opportunity to tap back into that level of performance to keep his team among the best in the West ahead of his superstar teammate’s (potential) return.

George was awesome last postseason, posting averages of 29.6 points, 11.0 rebounds and 5.6 assists in the eight games following the injury to Leonard.

Those numbers might be a bit harder to sustain throughout the course of the regular season, but George will without a doubt step up for a Clippers team that will be adjusting to learning one another on the fly after adding several pieces through the draft and free agency.

Expect George to answer the call in order to keep his team competitive, providing a reminder of exactly why he is a max contract player in the league.