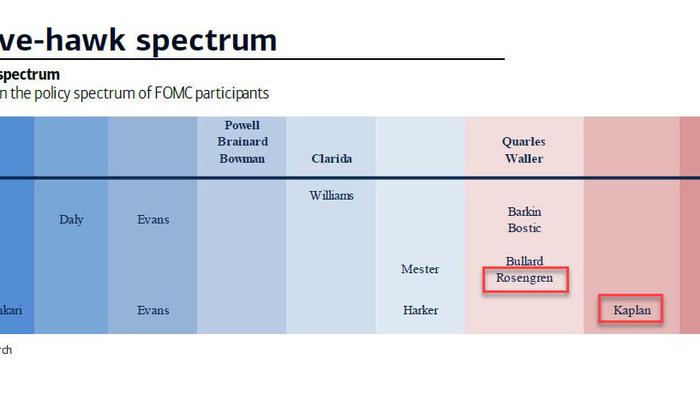 The ink has barely dried on the Fed’s dot plot unveiled just a week ago, and the horoscope of how the stars may align on any tightening seems to have already gone awry.

While both Eric Rosengren and Robert Kaplan having decided to step down, the dynamics of the FOMC roll call of voters is set to become an engrossing game in itself. Rosengren, a hawk, was set to be a voter next year, so the market needs to know which way his successor — yet to be named — will lean. Kaplan was a non-voting member in the current rotation.

Fed Vice Chairman Richard Clarida’s term as a governor expires in a few months, Randal Quarles will see his leadership post expire soon. And, of course, we don’t have any visibility yet on whether Chair Jerome Powell will be re-appointed. All these mean that there is a considerable game of musical chairs going on at the Fed that may call into question its ambitious dot plot.

While we have ticked higher on nominal rates in the past week, much of that stems from the rub-on impulse from the emphatic selloff we have seen gilts following indications from the Bank of England that it may raise rates sooner than the markets were thinking. In other words, should the selling in gilts slow — as I expect it to — it’s not clear whether Treasury yields will keep climbing. For now, the terminal rate in the U.S. is still below the median of the dot plot for 2024, meaning there is still a degree of skepticism that prevails on how acute any selloff in rates could amount to.

And in any case, as the Fed likes to remind us, the dot plot is a mere showcase of individual estimates, not a guide to how benchmark policy rates will actually evolve.