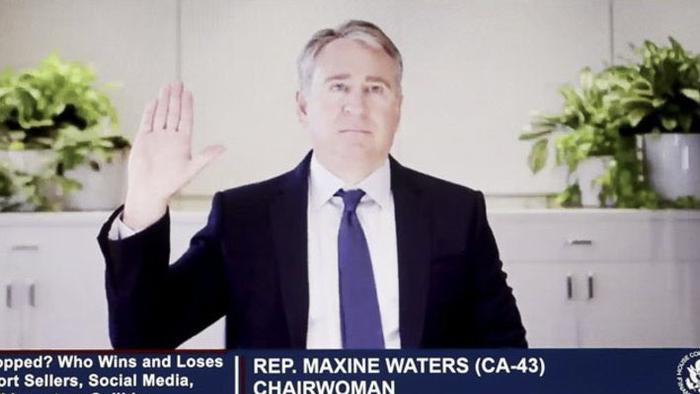 
Citadel Securities, the electronic market-making behemoth that has been cast as the biggest villain in American securities markets by the ‘Wall Street Bets’ crowd, isn’t afraid to sue its critics into silence (as it once did to Zero Hedge). But rarely does its social media team get involved with disputes involving the reputation of the company or its founder, former collegiate stock-trading whiz Ken Griffin (by the way, the ‘college’ where Griffin started his career trading in his dorm room was Harvard).

Well, after months of being cast as the shadowy figure that gave Robinhood “the tap” to shut off most trading in shares of GME and other “meme stonks” during that late-January surge (a decision made – as the story goes – to save Citadel peers and customers like Melvin Securities, which became the face of the firms who saw their massive GME shorts blow up in their faces).

Robinhood breathlessly explained that it was forced to halt trading by its clearing house, which demanded billions in collateral from Robinhood, money the firm had to go out and raise practically overnight. Congressional hearings were held, and the official narrative was largely accepted by everybody who matters.

Yet, conspiracies continue to smoulder on Wall Street Bets and other enclaves of anti-establishment sentiment, much to Citadel’s chagrin.

However, after months of radio silence, Citadel Securities’ Twitter account broke its nine-month silence on Monday to address a trending twitter hashtag accusing the company’s founder and CEO Ken Griffin of lying to Congress.

In its first tweets since Jan. 26, Citadel published a thread inserting it played no part in Robinhood’s decision to halt trading and insisted that Citadel was “the only major market maker during this time that provided continuous liquidity every minute of every trading day.”

The twitter account also asserted that Griffin and Robinhood CEO Vlad Tenev have “NEVER met or spoken” though it conspicuously left out other forms of electronic communication, like email.

Citadel Securities did not ask Robinhood or any other firm to restrict or limit its trading activity on January 27th.

Citadel Securities was the only major market maker during this time that provided continuous liquidity every minute of every trading day.

Ken Griffin and Vlad Tenev have NEVER met or spoken.

The leaked conversations that fueled the hashtag appear to be from the US District Court of the Southern District of Florida. Entitled January 2021 Short Squeeze Trading Litigation, the document shows emails between Robinhood execs that reference conversations with Citadel, including Robinhood CEO Vlad Tenev and COO Jim Swartwout. “Maybe this would be a good time for me to chat with Ken Griffin,” Tenev said at one point. “You wouldn’t believe the convo we had with Citadel, total mess,” Swartwout said later.

In a testament to the power of Citadel’s legal machine, the “leaked” emails have already been scrubbed from Reddit, with one user posting a YouTube video with excerpts from the emails shown on screen.

We can’t corroborate whether these emails are legitimate, and it’s certainly possible they are fake.

What’s more interesting about Citadel’s response is that it didn’t deny that the call and other activities mentioned in the emails took place. They simply denied that Griffin had lied to Congress.

Griffin, of course, was “perfectly clear” with his denial that Citadel had anything to do with Robinhood’s decisionmaking in a now-famous clip from his testimony before the House Financial Services Committee.

Even more famous than that clip was the confrontation between Rep. Juan Vargas and Griffin. Vargas asked Griffin if there was any collusion between Citadel and Robinhood, to which Griffin replied “absolutely not”.

So far, the mainstream business press have largely ignored this story. Maybe there’s a good reason for that. But we’re certainly curious to learn more, which we inevitably will as more documents from this lawsuit are inevitably made public.