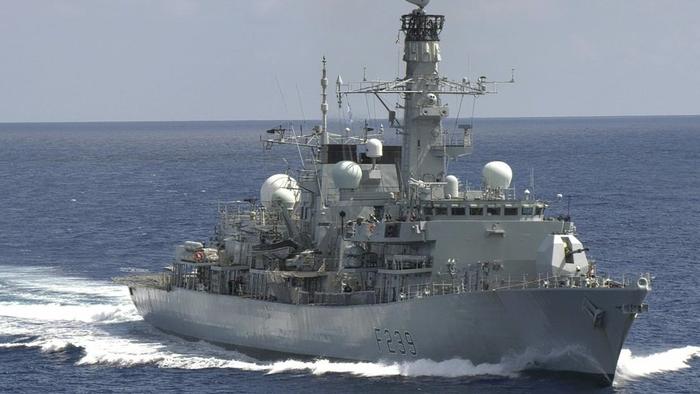 
Update (1700ET):  China’s initial response to the British warship’s passage was muted, with foreign ministry spokeswoman Hua Chunying telling reporters that Beijing hoped “the relevant countries can do more to build mutual trust between countries and uphold peace and security in the region.”

But shortly after, as CBS reports, the Chinese army’s Eastern Theater Command said it had sent air and naval forces to shadow the Richmond and warn it to leave the strait.

“This kind of behavior harbors evil intentions and damages peace and stability in the Taiwan Strait,” the army statement said.

For the first time since 2019, a British warship has transited through the Taiwan Strait on Monday, as the Biden administration has routinely sailed missile destroyers through the sensitive waterway to push back on Beijing’s military aggressiveness in the region, according to Stars And Stripes.

“After a busy period working with partners and allies in the East China Sea, we are now en route through the Taiwan Strait to visit Vietnam and the Vietnam People’s Navy,” the HMS Richmond, a Type 23 frigate known for anti-submarine warfare, tweeted.

After a busy period working with partners and allies in the East China Sea, we are now en route through the Taiwan Strait to visit #Vietnam and the Vietnam People’s Navy. #CSG21 International by design pic.twitter.com/0bys9eYY42

The last time a British warship transited the narrow strip of highly contested water was the HMS Enterprise in 2019.

When questioned about the frigate’s sailing, Chinese Foreign Ministry spokesperson Hua Chunying told reporters at a regular press briefing that “relevant countries should do things to build mutual trust and uphold regional peace and stability.”

The move by London comes as the Biden administration has been sending warships through the strait monthly, which has stoked tensions with Beijing. There have been 13 such sailings, showing the US’ commitment to a free Indo- Pacific region.

Tony Radakin, an admiral in Britain’s navy, recently told Nikkei Asia that it was “very clear that the Taiwan Strait is international waters. It is a waterway that can be used by different nations.”

Also, Beijing has been increasing diplomatic pressure on Taipei, which refuses to acknowledge Taiwan is part of China. The Chinese air force has conducted more than 500 incursions into Taiwan’s air-defense identification zone this year as the threat of a cross-strait conflict soars.

The Richmond is part of the HMS Queen Elizabeth strike group, making its first operational mission to the Pacific region.