WTI crude oil prices rallied handsomely this past week, brushing aside initial jitters towards the beginning of the week. That is when Evergrande contagion woes likely spooked markets ahead of the Federal Reserve monetary policy announcement. But, those fears subsequently subsided as the company made an onshore coupon payment and the People’s Bank of China injected liquidity into the financial system.

Oil traders ought to keep an eye on ongoing developments out of China, which remain fluid. It was reported that offshore bondholders had yet to receive interest payments by the end of the trading week. The main risk here is that an Evergrande default could weaken Chinese economic growth, and thus global output. China is after all the world’s second-largest economy, and a major consumer of oil.

What likely kept the growth-linked commodity afloat was the aftermath of the FOMC rate decision. There, Chair Jerome Powell hinted at completing policy tapering by the middle of next year. The central bank is also fairly optimistic about the economic outlook, brushing aside near-term risks around the Delta Covid-19 variant. In fact, the price of oil has been tending to inversely track global case growth – see chart below.

With that in mind, as the world continues to move past the current outbreak, and vaccination rates creep higher, WTI could remain on the offensive. On Tuesday, OPEC is salted to release its annual world oil outlook. Members from the cartel recently noted that shortfalls in natural gas are forcing energy consumers to look for substitutes, such as oil. As such, OPEC could boost demand expectations.

That may also come with further output hikes as OPEC works to gradually reintroduce supply into the market. But, the next meeting of the coalition is scheduled for October 4th. Until then, this may leave prices bolstered. Keep a close eye on Fed commentary this week. Chair Jerome Powell is scheduled to testify before Congress. Later in the week, the central bank’s preferred gauge of inflation will cross the wires, likely to impact policy bets.

According to IG Client Sentiment (IGCS), about 38% of retail traders are net-long crude oil. Downside exposure has climbed by 8.40% and 11.77% respectively. We typically take a contrarian view to crowd sentiment. Since most traders are net-short, it suggests prices may keep rising. Recent shifts in positioning are further underscoring the bullish contrarian trading bias. 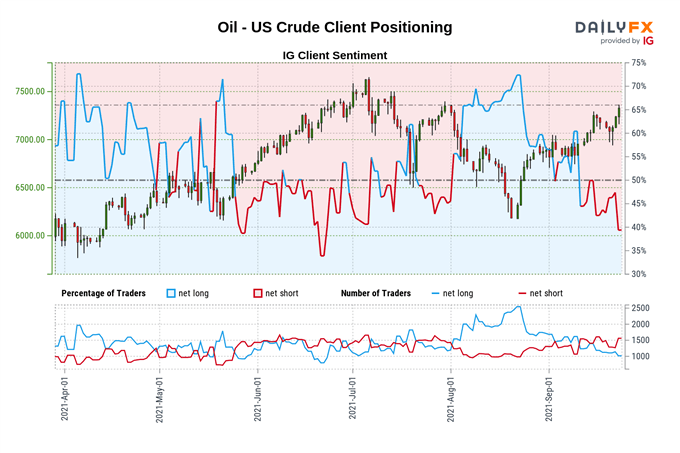