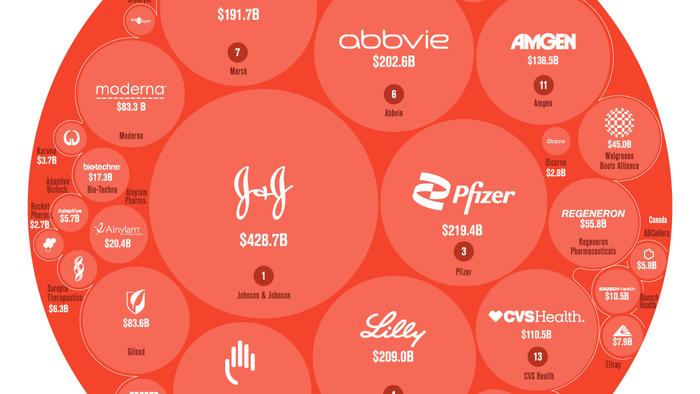 
Some of the world’s biggest pharmaceutical companies have played a central role in the COVID-19 pandemic.

However, it’s likely no surprise that the pandemic has also been great for many healthcare businesses. In fact, as Visual Capitalist’s Anshool Deshmukh notes, in 2020 alone, the world’s 50 largest pharmaceutical companies still combined for a whopping $851 billion in revenues.

In this graphic, using data from Companies Market Cap, we list the largest pharmaceutical companies in the world by market capitalization. It’s worth noting this list also includes healthcare companies that work closely with pharmaceuticals, including biotech, pharmaceutical retailers, clinical laboratories, etc.

Editor’s Note: A previous version of this graphic was missing some key companies such as GSK and AbbVie. They were unfortunately not included in the original source and we are now working to make sure there were no other smaller omissions. Thanks to all that sent in corrections.

To start, here are the top five biggest pharmaceutical companies in the world at the moment by market capitalization:

The pharmaceutical and consumer goods giant is worth $428.7 billion in market cap. They developed the third vaccine authorized for use in the U.S. and were named among the TIME100 Most Influential Companies List in 2021.

The Swiss pharmaceutical giant is at the forefront of oncology, immunology, infectious diseases, ophthalmology, and neuroscience. In 2019, Roche’s pharma segment sales rose by a healthy 16% to $53 billion.

Despite being the leading COVID-19 vaccine manufacturer in North America, Pfizer slid in the rankings to third place. The company has recently gained momentum, especially in the past quarter, with Q2’2021 revenues of $19.0 billion, reflecting a 86% operational growth from 2020.

The second-biggest pharmaceutical company out of Switzerland, Novartis has been the face of the pharma industry for about 25 years. The primary manufacturer for the most recognizable drugs on the market pulled in a revenue of over $48 billion in 2020, a 3% increase compared to 2019.

Here’s how all the biggest pharmaceutical companies in the world stack up against each other:

According to the World Trade Organization (WTO), these countries exported the most number of pharmaceuticals in the year 2019:

In contrast, here are the biggest importers over the same period.

This position is hardly surprising for the U.S., where six of the world’s top 10 pharmaceutical companies are headquartered. The country also captures 45% of the global market.

The Future of Pharmaceutical Companies

If the response to the COVID-19 pandemic has taught us anything, it is that in building a patient-centered future, the pharmaceutical industry plays a key role. It has to constantly find new ways to customize medicines while researching and developing new tools and drugs.

By embracing disruptive technologies like 3D printed drugs, artificial intelligence guided therapies, and preventive medicine while working with regulatory agencies, the pharmaceutical companies will benefit from having a digital revolution.

Furthermore, emerging markets will have a more significant say in the global pharmaceutical market in the coming years. Even though ‘big pharma’ will keep raking in the massive profits they do every year, their reliance on countries like Brazil and India for research and drug production will significantly impact the years to come.