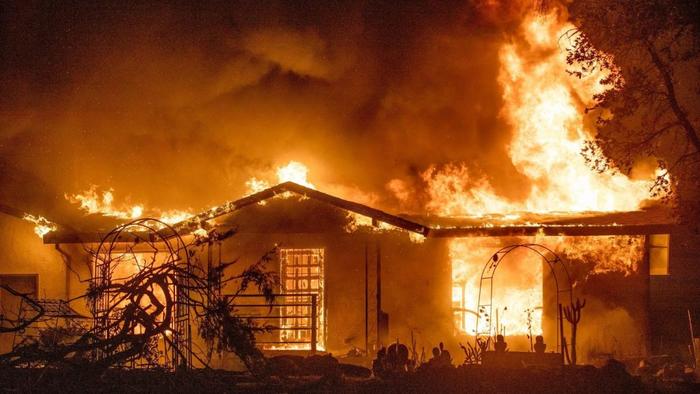 
Shares of the perennially-troubled PG&E – America’s largest utility whose aging equipment has helped start a rash of deadly wildfires across California – tumbled Friday after the DA in Shasta County hit the company (which just emerged this spring from its second bankruptcy filing in as many decades) with a 31-count indictment, including 11 felonies, and 4 manslaughter charges.

The charges were mostly tied to the 2020 Zogg fire in northern California, where hundreds of homes were destroyed

During a Friday news conference, Shasta County District Attorney Stephanie Bridgett said her office had determined back in July that PG&E was “criminally liable” for last year’s Zogg Fire, which blazed near the NorCal city of Redding.

“They failed to perform their legal duties. Their failure was reckless, criminally negligent, and resulted in the deaths of four people,” Bridgett said during the briefing.

PG&E’s recent criminal convictions from the last few years, which have been marred by intense wildfire seasons in the West, include pleading guilty last year to 84 counts of involuntary manslaughter tied to the Camp Fire, the 2018 blaze ignited by its long-neglected electrical grid that nearly destroyed the town of Paradise.

It’s also still facing criminal charges from the 2018 Camp Fire in Butte County, the 2019 Kincade Fire in Sonoma County and was on probation from the deadly San Bruno explosion when a 30-inch pipe exploded into flames killing eight people.

Bridgett explained PG&E’s liability thusly: the fire was started because PG&E didn’t remove a tree, which had been marked to be removed in 2013, but never was. A grapevine left in place on that tree caused significant physical defects to its trunk, which ultimately fell on an electrical line during a windstorm on Sept. 27, 2020.

The charges were announced three days before the anniversary of the fire.

“I have determined that we have sufficient evidence to prove beyond a reasonable doubt that the Pacific Gas & Electric Company is criminally liable for their reckless ignition of the Zogg Fire and the deaths and destruction that it caused,” she said at a news conference. “While criminal prosecutions of corporations is rare. One of the primary reasons to charge a corporation criminal is a finding that illegal behavior is widespread and serious. Their failure was reckless and was criminally negligent, and it resulted in the death of four people.”

The indictment counts span from murder to environmental crimes; 20 are misdemeanors.

PG&E said previously the death and destruction caused by the Zogg fire (and all the other fires its equipment has caused) have been “heartbreaking” but that it has resolved civil claims with Shasta County and continues to reach settlements with victims and their families.

“We do not, however, agree with the district attorney’s conclusion that criminal charges are warranted given the facts of this case,” the utility’s statement said after the DA announced her desire to charge the utility this summer.

Of course, the more legal pressure PG&E is facing, the higher the odds that it will simply retreat once again behind bankruptcy protection (what would be its third since 2001) to manage its claims. Though there’s also the threat that its regulator, the Public Utility Board of California, takes over control (something that would probably horrify shareholders).

And, in what’s perhaps the most perverse outcome of all, whatever fines it pays out will be offset by rate hikes borne by its customers, about 16MM people in northern and north-central California. And no matter what happens, next year we’ll get to go through this whole process again since PG&E has already copped to starting more fires this year.