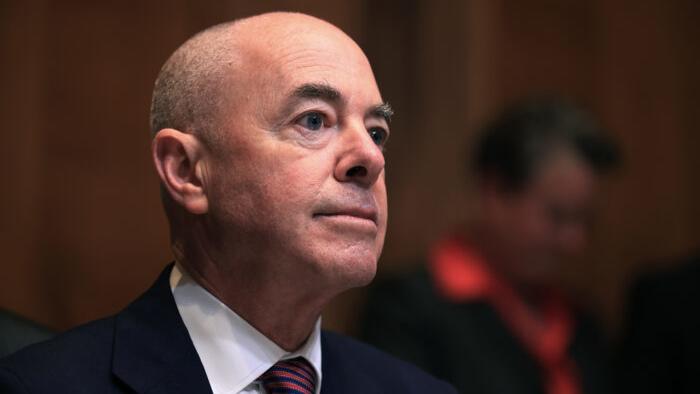 Homeland Security Secretary Alejandro Mayorkas plans to travel to the U.S.–Mexico border amid the illegal immigration crisis there.

“I will be traveling to the border myself,” Mayorkas said on CNN on Sunday.

Mayorkas did not say when or where he would be going and the Department of Homeland Security (DHS) did not respond to emailed questions.

Thousands of illegal immigrants, many from Haiti, have amassed in recent days under the international bridge in Del Rio, Texas, highlighting the Biden administration’s failure to stem the surge in illegal immigration since President Joe Biden took office in January.

Lozano said he updated Mayorkas on the latest updates on Sunday morning and was “grateful to receive an immediate plan of action.”

Illegal immigrants bathe and play on the U.S. side of the Rio Grande, the international boundary with Mexico, in Del Rio, Texas, on Sept. 18, 2021. (Charlotte Cuthbertson/The Epoch Times)

DHS closed checkpoints in Texas on Friday and began expelling some of the immigrants over the weekend.

The agency surged some 400 agents and officers to the area to try to get the situation under control. It also helped move thousands of the immigrants to other processing locations to alleviate the crush in Del Rio and started talks with the immigrants’ home countries on accepting them back. The White House, meanwhile, directed federal agencies to work with the Haitian government and other governments to provide assistance to immigrants once they’re flown back to where they came from.

Beyond those steps, “the Biden Administration has reiterated that our borders are not open, and people should not make the dangerous journey,” DHS said in a statement Saturday, adding, “Individuals and families are subject to border restrictions, including expulsion. Irregular migration poses a significant threat to the health and welfare of border communities and to the lives of migrants themselves, and should not be attempted.”

“We certainly are experiencing a challenging situation, but we are surging resources and we have a multi-pronged approach to this,” Mayorkas said on CNN. He also said the Department of Defense was going to provide resources; the department did not return an inquiry.

Mayorkas said Haitians who arrived before July 29 would get temporary protected status but that those who arrived later would be repatriated.

The White House has not commented on the situation. White House press secretary Jen Psaki did not hold a briefing on Friday. Biden left Washington Friday for a weekend vacation in Rehoboth Beach, Delaware, where he ignored questions from pool reporters. Harris appeared at a college football game in Washington on Saturday to do the coin toss.