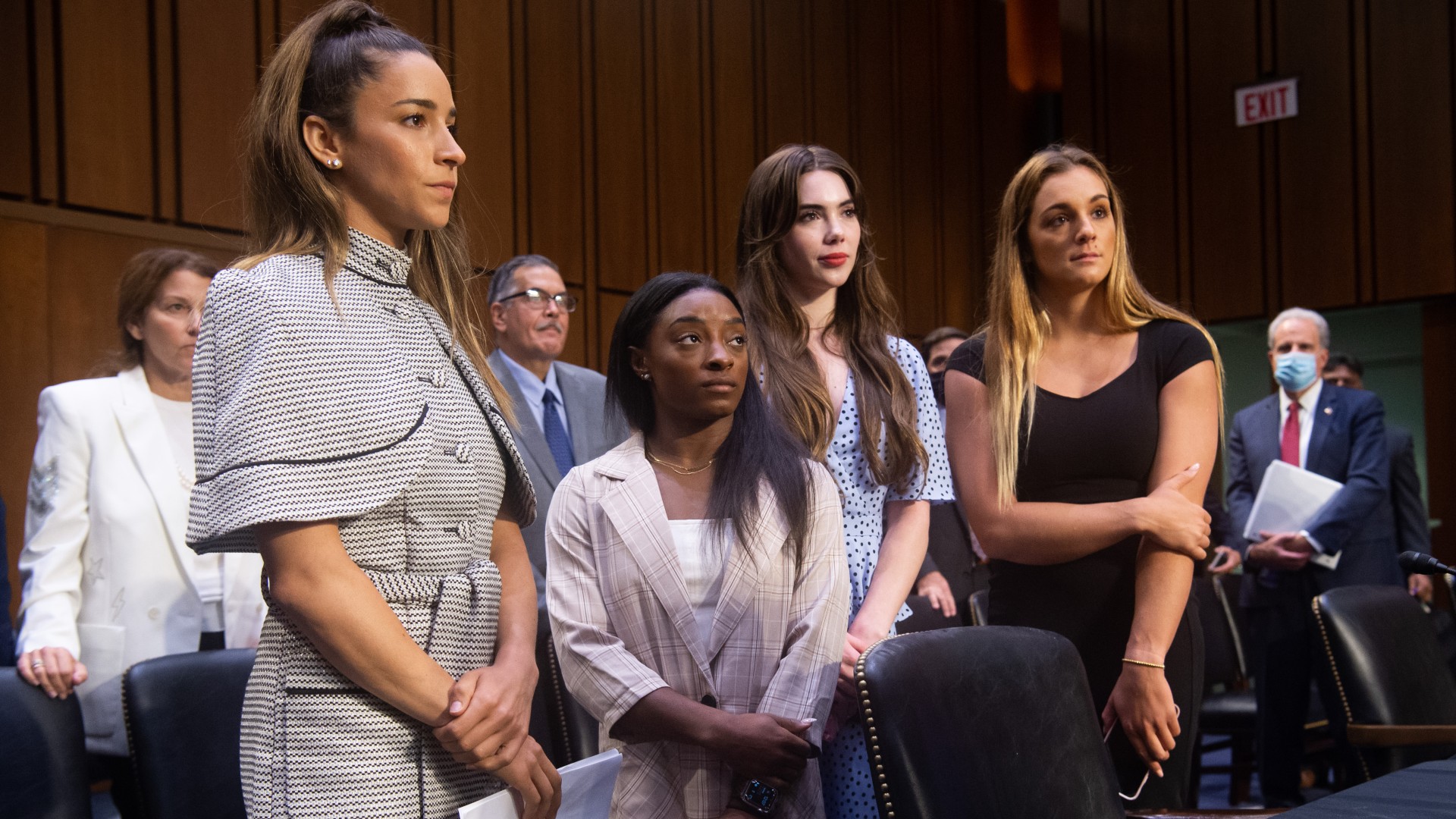 Simone Biles and three former teammates on the U.S. national gymnastics team said during Senate testimony Wednesday that the FBI not only mishandled the investigation of the Larry Nassar sexual abuse case, but protected USA Gymnastics and the United States Olympic and Paralmypic Committee.

The testimony from the gymnasts — Biles, McKayla Maroney, Maggie Nichols and Aly Raisman — came months after the Office of the Inspector General released a report saying that FBI officials in Indianapolis “failed to respond to allegations of sexual abuse of athletes by former USA Gymnastics physician Lawrence Gerard Nassar with the urgency that the allegations required.”

The gymnasts spoke about how the FBI’s investigation falsified statements, minimized the abuse and displayed a lack of urgency in pursuing the claims made by several athletes, allowing Nassar to continue to molest children.

“Nelson Mandela once said, ‘There can be no keener revelation of a society’s soul than the way in which it treats its children.’ It is the power of that statement that compels and empowers me to be here in front of you today,” Biles said. “I don’t want another young gymnast, Olympic athlete or any individual to experience the horror that I and hundreds of others have endured before, during and continuing to this day in the wake of the Larry Nassar abuse.”

Maroney explained, in detail, the molestation she suffered at the hands of Nassar and said when she relayed it to the FBI agents over the phone, they were silent before replying, “Is that all?”

“Those words in itself was one of the worst moments of this entire process for me,” Maroney said. “To have my abuse be minimized and disregarded by the people who were suppoed to protect me just to feel like my abuse was not enough. But the trust is my abuse was enough. And they wanted to cover it up.”

Maroney said the FBI falsified her report and silenced her in their investigation, and that the OIG report found the statement written by the FBI agent who interviewed her was “materially false.”

Nichols said that when she reported her abuse to USAG, she was treated differently by the governing body. She said Nassar was allowed to retire with his reputation and return to Michigan State, where he continued his abuse on others.

“I reported my abuse to USA Gymnastics over six years ago, and still my family and I received few answers and have even more questions about how this was allowed to occur and why dozens of little girls and women at Michigan State had to be abused after I reported,” Nichols said. “In sacrificing my childhood for the chance to compete for the United States, I am haunted by the fact that even after reporting my abuse, so many women and girls had to suffer at the hands of Larry Nassar after I reported.”

Raisman said her reports were buried by the USAG and USOPC, and mishanlded by federal law enforcement, and that after they learned of Nassar’s abuse, they still did nothing to restrict his access despite the USAG office sharing a building with the Indiana Child Protective Services.

“Instead they quietly allowed Nassar to slip outside the side door, knowingly allowing him to continue his work at MSU, Sparrow Hospital, a USAG club and even run for school board,” Raisman said. “Nassar found more than 100 new victims to molest. It was like serving innocent children up to a pedophile on a silver platter.”

Maroney asked what the point was of bringing up claims of abuse to law enforcement if it was just going to be buried. She said that the mishandling of the reports allowed Nassar to continue to abuse girls and women for over a year.

“To not indict these agents is a disservice to me and my teammates. It is a disservice to the system which was built to protect all of us from abuse. It is a disservice to every victim who suffered needlessly at the hands of Larry Nassar after I spoke up,” Maroney said. “Why are public servants whose job is to protect getting away with this? This is not justice. Enough is enough. Today, I ask you all to hear my voice. I ask you please do all that is in your power to ensure that these individuals are held responsible and accountable for ignoring my initial report. For lying about my initial report. And for covering up for a child molester.”

Raisman raised questions about possible motives behind why the investigation was mishandled. She asked whether it was to protect sponsorships, the 2028 Los Angeles Olympic hosting bid, to protect jobs or avoid criminal liability.

“Why must we speculate when the facts are obtainable and the stakes are so high?” Raisman said. “Just as it is naive to assume the problem only rests with Nassar, it is unrealistic to think we can grasp the full extent of culpability without understanding how and why USAG and USOPC chose to ignore abuse for decades, and why the interplay among these three organizations led the FBI to willingly disregard our reports of abuse.”

After the report from the OIG, Nichols said there has been no accountability regarding the wrongdoing by those in the FBI investigation or those at USAG or USOPC. She said so far the only person to face any federal charges from the investigation of Nassar’s abuse is Nassar himself.

“For many hundreds of survivors of Larry Nassar, this hearing is one of our last opportunities to get justice,” Nichols said. “We ask that you do what is in your power to ensure that those that engaged in wrongdoing are held accountable under the law.”

Biles said that all the survivors continue to live with the scars of Nassar’s abuse. The only one of Nassar’s victims to compete in the 2021 Tokyo Olympics, Biles said that the postponement of the games meant having to go to the gym, train, attend therapy and live with the daily reminder of the story for an extra 365 days before she could compete again.

She said what has pushed her every day was “the goal of not allowing this crisis to be ignored.”

“I worked incredibly hard to make sure that my presence could maintain a connection between the failures and the competition at Tokyo 2020,” Biles said. “That have proven to be an exceptionally difficult burden for me to carry, particularly when required to travel to Tokyo without the support of any of my family. I am a strong individual and I will persevere. But I never should have been left alone to suffer the abuse of Larry Nassar and the only reason I did was because of the failures that lie at the heart of the abuse that you are asked to investigate.”

The OIG report also stated that the FBI’s Los Angeles Field Office received the same allegations after eight months of inaction by those in Indianapolis, and that while the Los Angeles office took investigative steps, “it too failed to take other steps to mitigate the ongoing threat posed by Nassar.”

The report also found that the Indianapolis Field Office special agent in charge, Jay Abbott, made false statements to the OIG to minimize errors made by the office and that he spoke with USAG president Stephen Perry about a potential job with the U.S. Olympic Committee. The report said Abbott applied for the job and “falsely denied that he had done so when questioned by the OIG on two separate occasions.”

“In reviewing the OIG’s report, it truly feels like the FBI turned a blind eye to us and went out of its way to help protect USAG and USOPC,” Biles said. “A message needs to be sent. If you allow a predator to harm children, the consequences will be swift and severe. Enough is enough.”