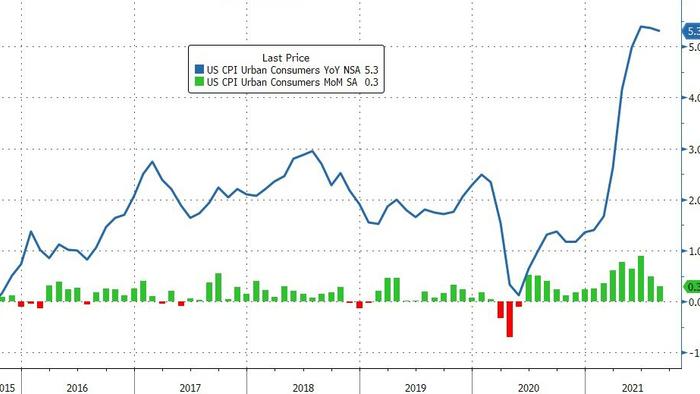 
As anxiety over the timing of the taper (not the if but the when) rise, all eyes are anchored on this morning’s CPI (which was expected to rise MoM again but drop marginally on a YoY basis). Both headline (+0.3% MoM vs +0.4% MoM exp) and core (+0.1% MoM vs +0.3% MoM exp) CPI printed below expectations but on a YoY basis headline CPI rose 5.3% – as expected.

That is the 15th straight monthly rise in consumer prices and the fourth straight month above 5% on a YoY basis. On a side note, this is the first time MoM CPI printed below expectations since November 2020.

Is this merely the Delta variant’s impact creating an illusion of ‘transitory’?

The index for new vehicles continued to rise in August, increasing 1.2 percent after rising 1.7 percent in July. The recreation index rose 0.5 percent in August after increasing 0.6 percent the prior month. The index for medical care rose 0.2 percent over the month; its component indexes were mixed. The hospital services index rose 0.9 percent over the month, while the physicians’ services index was unchanged and the prescription drugs index declined 0.4 percent. The indexes for personal care, for communication, and for apparel all increased in August.

Of course, the suppression of (not transitory) CPI OER remains key to pretending this is all under control…

As we noted earlier, this reinforces an issue that we have been flagging for a couple of months: while the debate around inflation seems to be focused on when and how quickly “transitory” factors will normalize, “persistent” inflation has steadily moved up to a historically elevated rate.