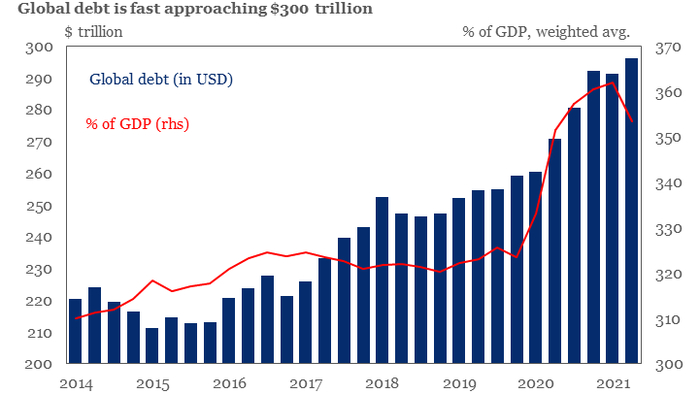 
Another quarter, another all time high in global debt (don’t expect this to ever again drop under the existing monetary framework).

According to the Institute of International Finance (IIF), total global debt – which includes government, household and corporate and bank debt but excludes derivatives and various other exotic products – rose to a new record high of nearly $300 trillion in the second quarter, $296 trillion to be precise, and up $4.8 trillion in the quarter. This means that in the 18 months since covid, total debt has risen a stunning $36 trillion!

The rise in debt levels was the sharpest among emerging markets – read China – with total debt rising $3.5 trillion in the second quarter from the preceding three months to reach almost $92 trillion.

There was a silver lining: the debt-to-GDP ratio declined for the first time since the start of the pandemic as economic growth rebounded. The IIF said that of the 61 countries it monitored, 51 recorded a decline in debt-to-GDP levels, mostly on the back of a strong rebound in economic activity, although we are very curious what non-GAAP GDP number the IIF used to calculate a faster GDP growth than debt.

As a result, debt as a share of gross domestic product fell to around 353% in the second quarter, from a record high of 362% in the first three months of this year.

The IIF also said that total debt-to-GDP ratios excluding the financial sector are below pre-pandemic levels in just five countries: Mexico, Argentina, Denmark, Ireland, and Lebanon. Of course, if only includes the financial sector – as one should – this statistic is meaningless garbage.

The one country which is already bursting at the seams with debt, China, saw a steeper rise in its debt levels compared with other countries, while emerging-market debt excluding China rose to a fresh record high at $36 trillion in the second quarter, driven by a rise in government borrowing.

Meanwhile, after a slight decline in the first quarter, debt among developed economies – especially the euro area – rose again in the second quarter (again, repeat after us, debt will never again decline).

In the United states, debt accumulation of around $490 billion was the slowest since the start of the pandemic, although household debt increased at a record pace. Expect this number to explode higher after Biden passes his next fiscal stimulus, whenever that is.

“The rise in household debt has been in line with rising house prices in almost every major economy in the world,” said the IIF’s Tiftik, doing everything he can to show central bankers how big is the housing bubble they have created.

Finally, the IIF said that total sustainable debt issuance – which we assume refers to the epic scam that is ESG – surpassed $800 billion year to date, the IIF said, with global issuance projected to reach $1.2 trillion in 2021.