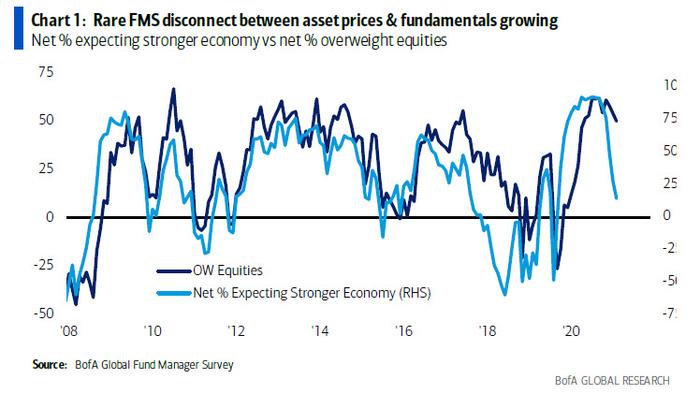 
Over the past few years, one of our recurring laments about the Bank of America Fund Manager Survey was the at times irreconcilable intellectual inconsistency of the survey respondents, who on one hand have panned the state of the economy even as the piled into risk assets (or so they said, one wouldn’t know it by looking at the chronic underperformance of the active manager cohort), although in retrospect that has served them well in a world where “bad news has consistently been good news for stocks.”

Well, in the latest, September, edition of the BofA FMS which polled 258 panelists managing $839 billion in AUM, and which was titled “Fiscal Frenzy Flips to Fiscal Flop”, this apparent inconsistency has finally caught up to poll organizer, Chief Investment Strategist Michael Hartnett who notes that a “rare FMS disconnect between asset prices & fundamentals growing” whereby a net 50% long stocks vs 20-year average of 29%; while net 69% short bonds (vs 43% avg) even as global growth expectations have continued to plunge, and in September, economic growth expectations are now just net 13%, the lowest since April 20 and down from the 91% peak in March 21. This is notable because as Hartnett points out, “global growth expectations have historically led FMS investor equity allocation but equity allocation has lagged this cycle.” In other words, any last connection between stocks and the underlying economy has now been irrevocably torn.

And alongside this drop in “peak boom” expectations, stagflation concerns are starting to rise again, as below trend growth and above trend inflation was up +5% MoM to now 20%.

Starting with the survey bottom line, Hartnett summarizes the findings as follows: “tanking macro optimism = lower-for-longer rates = everyone “long stocks-short bonds”; And as a result of the inability of the Biden fiscal frenzy to sustain the “boom”, portfolios have flipped from long cyclicals to long barbells, even as few Wall Street professionals “are positioned for credit events, recession or stagflation.”

Hartnett then takes us down the key categories, starting with macro, where expectations for global growth has plunged to just 13% – the lowest since May’20, and sharply down from 75% in Jun’21 – for rising profit to 12%, down from 89% in Mar’21…

… and for rising inflation to negative, or net -1%, down from the peak in Apr’21 of 93%. This was the first time since May’20 that a net % of FMS investors have expected inflation to fall.

Yet while “peak inflation” is now far in the rearview mirror, short-term rate expectations remain elevated and lag inflation expectations more than historically.

And yet, in another example of just how disconnected the survey is from reality, just 6% of respondents expect recession. Maybe most of them are 25-year-old fund managers who got their financial education on TikTok?

Even more concerning is that in this environment of slowing growth and stock euphoria where nobody expects a recession, margin expectations have plunged to net -22%, meaning the majority now expect profit margins will shrink.

Hartnett then addresses policy, where 84% expect taper by year-end (some 59% say monetary policy “too simulative” the most since May’11); but consensus on the first Fed hike has been pushed out from Dec’22 to Feb’23…

… which as we discussed previously is a mistake since even the WSJ now warned that the taper will begin in November, with Goldman assigning 70% odds to this month being the “start.” Asked what could prevent the Fed from tapering, 49% of investors – who clearly are unaware that Delta has now long peaked in the US – think Delta will be the most likely reason that will prevent the Fed from tapering in the next 6 months. 36% think payrolls, followed by inflation (7%).

Continuing to risk appetite, the survey reveals that cash levels are modestly higher to 4.3% from 4.2%, and BofA’s Bull & Bear Indicator down slightly to 5.7 from 5.8. “Clearly there is no panic.”

… yet it another paradox, the survey finds that equity protection is at the lowest level since Jan’18, a far cry from media reports that everyone is extremely hedged to an upcoming drawdown…

… while “liquidity conditions” are “ominously” viewed as best since Jul’07…

… and for good reason – the Goldman financial conditions index has never been easier. .

Next, Hartnett addresses stock exposure, where he finds higher levels of risk taking (now at a net 9%, up modestly 6% MoM) but down from the peak of 25% in Feb’21 (20 year avg = -15%). And here yet another paradox: since risk levels have historically paralleled equity allocation, growth expectations are saying equity allocations should fall “but risk taking is telling the story that investors are ignoring the macro.”

Separately, the FMS found that investor positioning in small cap/value/junk is back to pre-election Oct’20 lows (don’t tell JPM which every day is pounding the table on the value/reflation trade).

Instead, investors have a preference for barbell trades: health care/tech (growth) & banks/industrials/EU (value), while defensives are  being shunned with bond proxy utilities as the biggest underweight;

Not surprising with the Nikkei soaring to 30 year highs, the survey found that Japan short-covered 11ppt to a net 1% underweight, the lowest underweight since May’21 (even so, the current allocation is 0.2 stdev below its long-term average.)

… while as a result of China’s turmoil, Emerging Markets were cut to 1st underweight since May’20.

Addressing the $64 trillion question, the number of respondents saying that inflation is transitory increased in September, with the number rising to 69% while only 28% say inflation is permanent. As a reminder, on Wall Street the majority is always wrong.

Finally, while this indicator is usually the most useless (and incorrect) of all, the FMS respondents said that the most crowded trades are long tech, ESG, short China stocks.

At least the 25-year-old survey respondents who are confused by the simplest financial concepts, were right to correctly identify the biggest risk facing the market: inflation.