Inflation has risen, but bond yields have declined. Such a divergence is strange — beware gold bulls!

Would you like to see something mysterious? If yes, please look at the chart below. It shows the yields on (red line) and CPI annual inflation rates (blue line) in recent years. As you can see, a huge divergence emerged this year: while inflation surged above 5%, nominal bond yields declined from 1.6% to 1.3%.

Why is it so strange? Well, economic theory says that when inflation goes up, it erodes the purchasing power of bonds’ coupon payments. Thus, the price of bonds declines, and yields increase. In other words, when inflation accelerates, investors demand higher inflation premium to protect their real returns.

But now we can observe rising inflation and declining bond yields at the same time. The yield on the 10-year Treasury is 1.3%, which is four percentage points below the inflation rate, so investors who buy bonds lose a lot of money in real terms. Something is clearly wrong here. Let’s solve this bond conundrum!

The first potential explanation is that bond investors trust the Fed and believe that high inflation is mainly transitory. If so, the bond yields are more or less accurate and could stay around current low levels, and the inflation rates will adjust. The supply disruptions caused by the pandemic will eventually resolve, while the Fed is going to tighten its monetary policy, adding to disinflationary forces.

At first glance, the scenario in which inflation is declining seems to be negative for the yellow metal, as it implies lower demand for gold as an inflation hedge. However, in this case, interest rates could stay at very low levels for a long time. And gold likes the environment of low yields.

The second possible reason for the decline in interest rates is that bond investors expect slower economic growth than previously thought. Indeed, recent data suggests that the pace of GDP growth could be peaking. The spread of the delta variant of the coronavirus, smaller infrastructure plan than initially outlined, a slowdown in China’s economic growth and the Fed’s tightening cycle – all these factors could soften the U.S. growth prospects, translating into lower yields.

It goes without saying that this scenario would be very positive for . High inflation plus a slowdown in economic growth equals stagflation, a dream environment for gold. However, the stock market didn’t weaken, as one could expect after a downward revision of investors’ growth prospects. On the other hand, the spread between yields on 10-year and two-year Treasuries has narrowed substantially since March, as the chart below shows. The flattening of the yield curve often indicates a slowdown in economic growth. 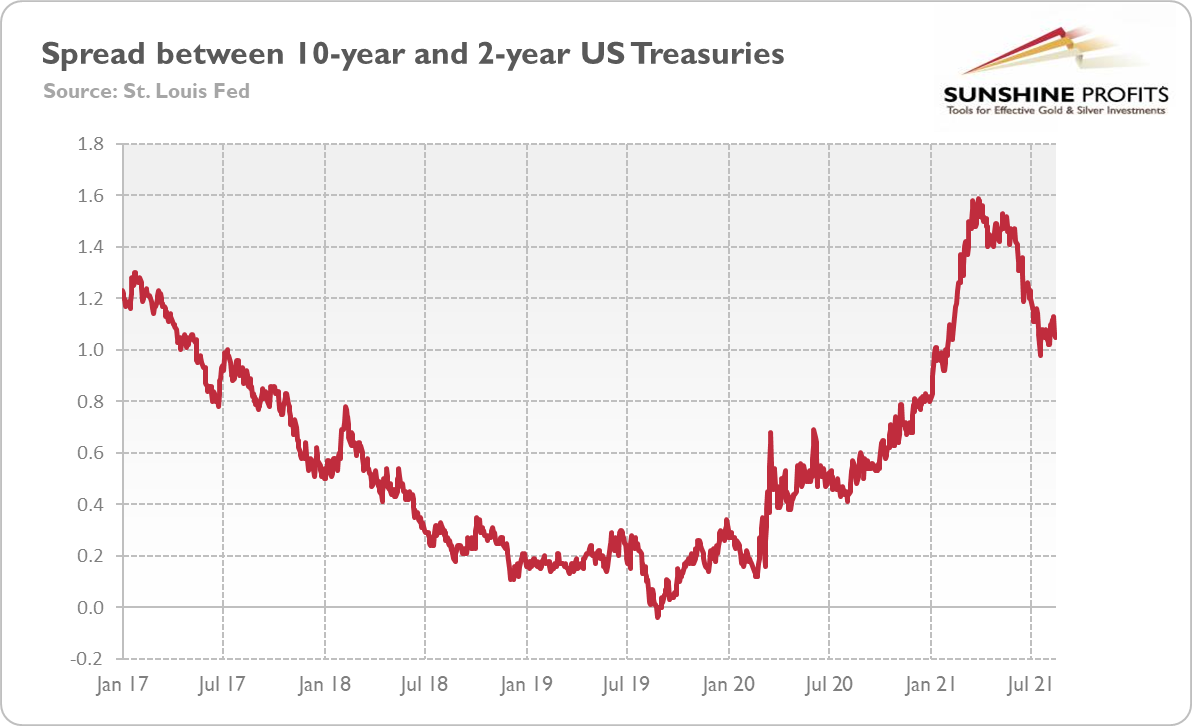 Spread Between 10- And 2-Year Yields.

But it’s also possible that technical factors or the central bank’s interventions trumped the fundamentals. Strong demand for the U.S. Treasuries that pushed yields down despite rising inflation could be the case here. After all, the Fed has been purchasing $80 billion a month in Treasuries (and $40 billion in mortgage-backed bonds) since June 2020. In other words, quantitative easing could disrupt the functioning of the bond market.

Indeed, the unprecedentedly easy monetary policy conditions with ultra-low interest rates and abundant liquidity could explain why both stock and bond prices are so high right now (and bond yields so low). In an environment of negative real interest rates created by Powell and his colleagues, asset managers search for yield in every possible asset, even if it is not economically viable — including cryptocurrencies that are just memes (like Dogecoin) or bonds with yields lower than inflation rates.

What does it all imply for the gold market?

Well, I have good and bad news. So, the bad news is that the real interest rates seem to be excessively low (see the chart below) and they are likely to move up over the economic expansion (especially when the Fed tightens its monetary stance), whereas inflation expectations could ease somewhat later this year. Unfortunately for gold bulls, the increase in the real interest rates would likely push gold prices lower. 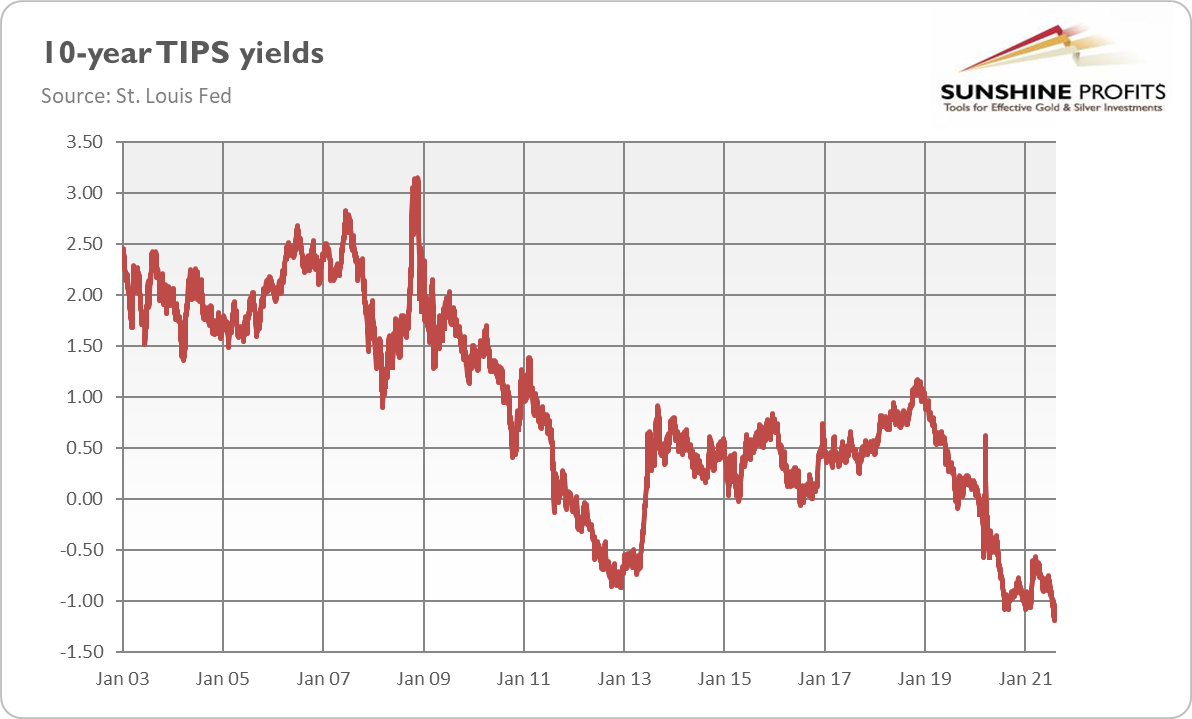 The good news is that that an increase in interest rates would put the governments and other debtors in a very difficult position, potentially leading to a debt crisis. Asset valuations could decline and financial crisis could follow suit. In other words, the Fed’s tightening cycle could sow the seeds of another recession and rally in gold.

Having said that, we have just recovered from one economic crisis, and it will take some time for another to unfold. Until that happens, real interest rates may normalize somewhat without entailing substantial perturbations, which would be negative for gold prices.