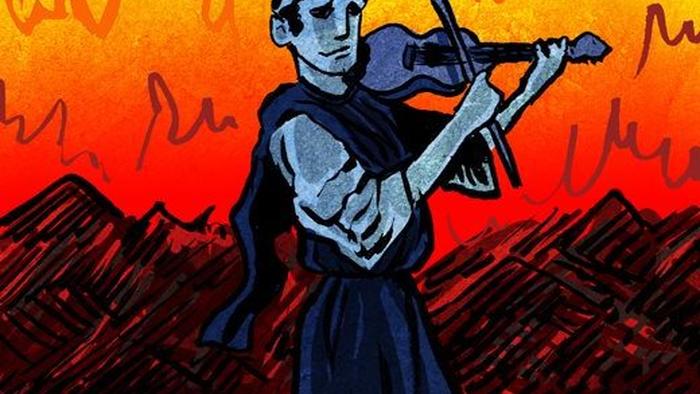 In a week in which it became clear (to some) in markets that China is serious about the Marxism that decries capitalism as limitless but feckless, reckless, and all-hands-on-deck-less, the US appears determined to show Marxists their criticism is bang on the Das Kapital. Indeed, while China prepares to girds its loins to step up to “extreme competition” with a fading ‘Rome’, the US seems to be dancing drunkenly from one massive self-indulgence to the next, in togas, fiddling as things burn, and marrying horses.

Before getting back to that thread, on US-China relations, how far we have come from Matt Damon bridging the Eagle-Dragon gap in the 2016 movie “The Great Wall” – which was not about the surprise Trump election win that year. An even higher wall may now lie between a diverse Hollywood and a China which yesterday banned “effeminate” men and behavior from TV, calling for more “revolutionary culture” to replace it. That’s a move which echoed the call of the “profound revolution” commentary from earlier this week, as did promised crackdowns on property and medical expenses. Interestingly, even the editor of the Global Times, often North Korean in his semantics, posted about the commentary (in Chinese): “I’m concerned that such language will evoke certain historical memories and potentially trigger a degree of ideological confusion and panic.”

In the West, a similar 70’s reaction is triggered by news that ABBA have just recorded a new album for the first time in 40 years. (We also have Bloomberg talking about a “neo-Cultural Revolution”, high inflation, recession fears, and potential US hostages in the Middle East: so when do flares come back?) Of course, even the EU is now crying ‘Mama Mia’ at its lack of muscle in this realpolitik world. On which, a good long read is “GLOBAL ASYMMETRIES STRIKE BACK”, which echoes (in far more detail) arguments made in 2017’s like-it-or-not ‘The Great Game of Global Trade’ report:

“When your trading partner grows its output, there are more opportunities for you to grow and export goods. This is the basic logic of economists, in which the prosperity and economic strength of countries, and also companies, contribute to your country’s prosperity and economic strength. Economic relations is a positive-sum game. In international relations, however, the strength of another country can be seen as a weakness of your country. Economic strength can be turned into an advantage in the political or even the military field. In short, the world is a zero-sum game in which the strength of one country is the weakness of another. Our former director and senior fellow Jean Pisani-Ferry argues convincingly that times have changed and economists need to learn when asymmetries matter and positive-sum logic is disturbed or dominated by zero-sum games.”

Quite. Yet the European Parliament Foreign Affairs Committee has voted in favor of a resolution of concrete and practical cooperation to support Taiwan in the context of the EU’s Indo-Pacific strategy, and for elevating EU-Taiwan “political relations,” and changing the name of “the European Economic and Trade Office” in Taiwan to “European Union Office in Taiwan”, with a full plenary vote in October. This has naturally seen an official protest from Beijing: expect more.

But back to where we came in. Today is NFT Friday. No, not Non-Farm Payrolls (NFP), I mean NFT. Yes, payrolls matter after the weak ADP print. But only in determining: 1) just how much ‘seasonal adjustment’ the BLS can get away with if it is a good number; and 2) just how much central bank liquidity is available to splurge on feculent, shipwreck-ulent digital nonsense rather than anything related to actual GDP. Yes, ostensibly what the Fed does next is related to these data. However, the deep structural problems in the real economy are what has driven the Fed to be where it is now, and the Fed is either irrelevant or makes these problems worse with its actions.

To keep things consistent, here is some more pre-NFT/weekend reading – a paper underlining the Marxist theory of money –more accurate than the no-money-or-banks “model” in neoclassical economics– *always* showed QE could only produce asset bubbles, not real growth, the lack of which is why we have turned to QE. This as Senator Manchin asks to press ‘pause’ on any US fiscal stimulus.

In ‘The General Theory of Employment, Interest and Money’ Keynes posited: “If the Treasury were to fill old bottles with bank-notes, bury them at suitable depths in disused coal-mines which are then filled up to the surface with town rubbish, and leave it to private enterprise on well-tried principles of laissez-faire to dig the notes up again (the right to do so being obtained, of course, by tendering for leases of the note-bearing territory), there need be no more unemployment and, with the help of repercussions, the real income of the community, and its capital wealth, would probably become a good deal greater than it actually is.” Today, people who rightly mock this kind of Keynesianism call the same thing done by computers ‘Bitcoin mining’, while day-trading the infinite supply of ‘diarrhoea coins’ and digital trading cards for tens of thousands of dollars is “innovation” that banks want to get in on, despite the fact that it is an obvious channel for all kinds of illicit activity.

So by all means skip the Marx paper, and the one on realpolitik, and use the time to make 15x returns on ‘capital’ in a week selling digital pictures of marsupials dressed as secret agents – “because markets”. But just wait until the proletariat, already deep into stocks in the US, understand what is going on in bourgeois blockchain. What we have seen in meme stonks will be just the warm up, and what we have seen in labor markets just the precursor: “None of my staff came in to work today! They all just made more than a month’s salary flipping jpegs of wombats in cool sunglasses!”

If Marx were alive today, there would surely be a new work in progress – ‘Das NFT’. Which would have to be in bullet points, with illustrations, and in ‘edutainment’ format for today’s alexic generation.

One has to ask, are the Western authorities really unaware this is all going on, or are we seeing a real-time Keynesian experiment from central banks (for some)? Either way, one sees why Marxists are feeling the historical-materialism wind at their backs. And why the NFP number really is not all that.

“Power comes from the barrel of a gun” vs. “Take a chance on me”. Which one would you back?