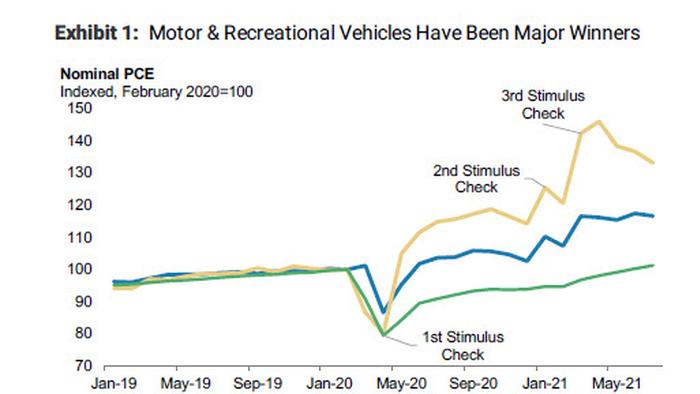 
Two weeks ago, Goldman caused a stir across Wall Street and financial media when the bank slashed its GDP forecast for the second time in 3 weeks, and now sees just 5.5% Q3 growth, down from 8.5% previously even as it saw inflation continuing to rise at a precipitous pace, and while Goldman didn’t use the word – for obvious reasons – the conclusion was that stagflation is knocking.

But if Goldman was a surprise, what Morgan Stanley did this morning – when the bank slashed its Q3 GDP from 6.5% to just 2.9% – was shocking. Citing the sharp slowdown in spending and consumer confident, Morgan Stanley noted that “motor vehicles sales in August was the latest data point to miss to the downside, with a fourth consecutive decline in annualized unit sales following the stimulus-related surge in April (highest rate since 2005).”

So, “incorporating motor vehicles sales, and implications for consumer spending, equipment investment, inventories, and capital goods imports and exports,” the bank is “lowering our tracking for 3Q GDP from 6.5% to 2.9%.”

Realizing that such a call could provoke some serious concerns across Wall Street, as other strategists scrambled to piggyback and thus confirm that the expansion is now effectively toast, or come up with “novel” reasons why Morgan Stanley is wrong if only to justify the market’s relentless trek higher, the bank’s chief economist, Ellen Zentner, tried to spin the huge downgrade in the nicest possible way, saying that August is the “bottom for growth in broad activity” and adding that the “expansion continues to advance, albeit at a slower-than-expected pace in 3Q. The slowdown is not broad-based and primarily reflects payback from stimulus spending and ongoing supply issues”, to wit:

Growth in the US economy is coming off a torrid pace in the first half of the year as stimulus spending and a reopening-fueled burst of activity cools. Ongoing supply constraints are additionally crimping key high value-add industries such as motor vehicles. We have anticipated slower growth in 2H21, but it has been greater-than-expected, concentrated in the third quarter. August is the month when we think broad activity slowed the most, which will be reflected in data reported throughout the month of September. We expect momentum to then rise again heading into 4Q with a more supportive base effect.

While the bank nuked its Q3 forecast, it remains hopeful that this will mark the lows and the economy will somehow manage to stage a rebound in Q4, yet even so the bank’s full year GDP forecast of 5.7% is well below the Fed’s most recent economic projection of 7.0% and Wall Street’s consensus of 6.3%.

Within this forecast, tracking for consumption moves down from 2.9% previously, to just 0.3% (vs. 11.6% annualized average in 1H21). With August as the low in activity, our forecast for 4Q GDP remains at 6.7%, helped by momentum in September as the sequential data begins to improve into the final quarter of the year. On balance, these revisions imply GDP growth of 5.6% 4Q/4Q (5.7%Y) this year, well lower than the Fed’s June SEP of 7.0% and 0.7pp below Bloomberg’s consensus of economists at 6.3%.

Then again, this is in line with what banks said every previous time when they slashed their growth estimates, so despite Zentner’s attempts at spinning this dismal figure positively, the most likely outcome is that the US is facing a negative GDP print in the coming quarters.

With that said, here are the summary highlights from the Morgan Stanley GDP downgrade:

Bad news aside, Morgan Stanley still sees buying power as fully supported by growth in income, as it shows in the next chart which depicts the path of income and spending throughout Covid: Pointing to the spread, Zentner writes that it has remained extremely stable, “suggesting that consumption is far from being constrained by lack of income. A strong labor market recovery and excess savings among lower-income households should support positive aggregate spending over the forecast horizon, even as fiscal stimulus fades and supply chain disruptions force households to pull back on purchases.”

Another reason for optimism is that Delta has now peaked: retail sales in July declined – a reflection of the wallet share shift – and yet food services (dining out) posted another strong increase. As MS notes, dining out is the only services spending tracked in the retail sales report and we believe that if folks are dining out then the ‘kids are alright’. This, Zentner writes, “makes the next data release on retail sales (September 16) incredibly important as concerns over the Delta variant and price increases affected household sentiment in August.”

What about the near record hit to confidence? Here too, MS is optimistic saying it may be short lived, with the bank’s BioTech Analysts believing that the Delta wave in the US has already peaked. Further, the bank’s forecasts point to slowing monthly growth in core inflation, with very early signs that price pressures in Covid-distorted categories may indeed be transitory. As such, the next University of Michigan’s preliminary report on consumer sentiment (due out September 17) is a key upcoming report.

Two more signs of optimism can be seen in high-frequency data which “also point to healthy levels of mobility.” Case in point, OpenTable dining out has moderated slightly, but remains broadly in line with where it has been since June (Exhibit 3). General activity outside the home tracked by Google has flattened, but remains elevated (Exhibit 4).

Finally, despite the clearly negative revision of the bank’s economic outlook, Morgan Stanley was quick to note that “the economy continues to expand, and at a faster pace than its potential, pulling up the labor force participation rate, driving down the unemployment rate, and sending wages higher. In line with the path of LFPR we envision, average monthly job gains peak in 3Q around ~870k, remaining at robust levels thereafter.”

As such, the bank’s view for monetary policy has not changed: the Fed continues to focus on reaching “substantial further progress” toward its goal of maximum employment, which Morgan Stanley forecasts will be reached by the end of the year. Zentner then concludes that :”he Fed sees no need to tighten policy, rather, it is time to take its foot off the gas pedal by growing its balance sheet at a slower pace (i.e. taper its asset purchases). The September FOMC and minutes should solidify a November or December announcement. Our current baseline sees a December announcement, with risk of earlier in November.”