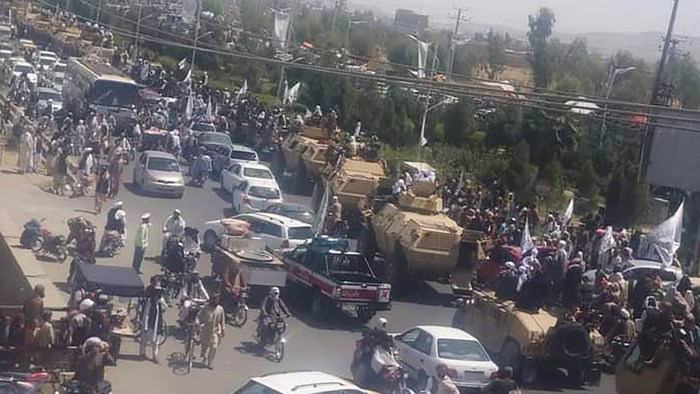 
The day after a defiant Joe Biden deemed his Afghanistan exit a “success” – the Taliban did a little celebrating of their own, holding a ‘victory’ parade in the streets of Kabul featuring the Taliban army’s new ‘toys’.

“The Taliban Wednesday paraded some of the military hardware they captured during their takeover of Afghanistan,” AFP wrote in confirming the spectacle that mocked the whole US debacle of a twenty year occupation that ended in handing over billions of dollars in military equipment.

The parade even included a helicopter flying over a long line of Humvees decked out with the white and black Taliban flags.

An AFP journalist observed that “a long line of green Humvees and armored fighting vehicles drove in single file along a highway outside Kandahar — the spiritual birthplace of the militant movement — many with white-and-black Taliban flags attached to aerials…”.

At least one Black Hawk helicopter has been seen flying over Kandahar in recent days, suggesting someone from the former Afghan army was at the controls as the Taliban lack pilots.

Starting weeks ago as Taliban militants began capturing base after base and easily steamrolled major cities across the country with little resistance, it became clear they were putting their newly acquired expensive American and NATO equipment to use, given they began taking cities in the south while riding in on Humvees and armored battle vehicles.

They’ve also positively invited journalists to document their treasure, losing no moment to show the cameras what the Americans left behind, in a constant insult to injury message to Washington and the West.

During his speech on Tuesday, President Biden hailed the US exit and evacuation efforts an “extraordinary success”. He said, “No nation has ever done anything like it in all of history; only the United States had the capacity and the will and ability to do it.” In a deeply ironic, twisted, and tragic sense… this statement is true, just not at all in the way the president thinks.

The 5 Next Cryptocurrency Will Go Big In 2023