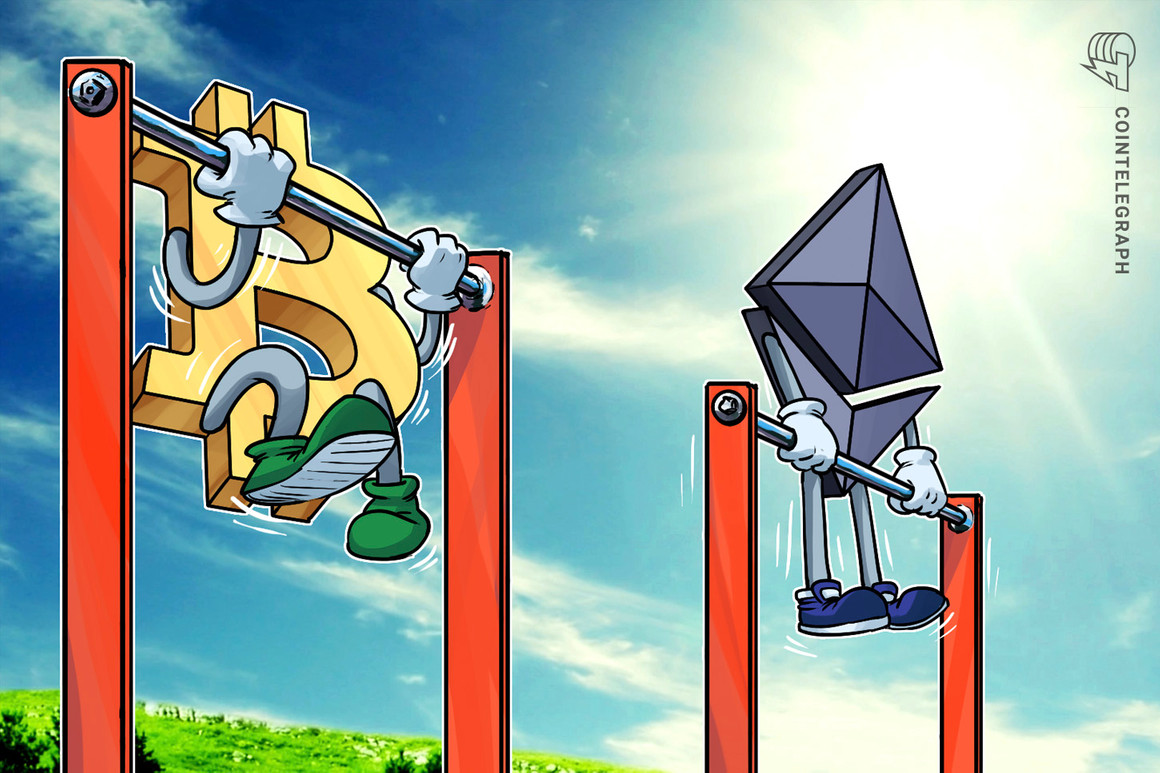 Dubbed Symmetrical Triangle, the structure develops after the price forms a series of higher lows and lower highs. Doing so results in a convergence of two trendlines with a degree of symmetry, which appears like a Triangle.

Analysts treat Symmetrical Triangles as trend continuation indicators, i.e., they usually send prices in the direction of their previous trend following a clear breakout. As a result, the ongoing ETH/BTC price boom expects to undergo an upside continuation after having fluctuating inside a similar Triangle structure for the last four months.

Part of the reason is Ether’s attempt to break above its Triangle consolidation setup, after rising seven weeks in a row by 179%. If it does, the ETH/BTC exchange rate could rise by as much as the Triangle’s maximum height (~0.025 BTC) from the point of its breakout (~0.069 BTC).

Ether’s bullish outlook against Bitcoin emerges as it outperforms the benchmark cryptocurrency in dollar terms on an intraday basis.

On Tuesday, the ETH/USD exchange rate rose 6.61% to $3,442, its highest level in three months. Comparatively, Bitcoin posted dwarfed gains, rising only 2.5% to $48,169, portraying a higher interim demand for Ether tokens among traders.

“Bitcoin only relies on its capped supply and the first-mover advantage, a trend many investors are beginning to substitute for unique technology that can drive a blockchain-dominated future.”

Jon Ovadia, founder, and CEO of crypto exchange Ovex, also said that Ethereum has better fundamentals than Bitcoin at this moment, largely due to its recent network update that aimed to add deflationary pressure to Ether through a fee-burning mechanism.

Thus far, about 146,878.7 ETH (worth approximately $492.3 million) have been burnt from the total circulating supply,” Ovadia said, adding that:

“The potential for a more superior Proof-of-Stake infrastructure through the highly anticipated launch of Ethereum 2.0 will also make the blockchain more usable, thus driving the coin’s utility and its price growth.”

So far into 2021, Ether has grossly outperformed Bitcoin due to its incremental adoption in the booming decentralized finance and nonfungible token industries. As it stands on Tuesday, the year-to-date profits for Ether are 373% versus Bitcoin’s 63.55%.

Nevertheless, Mike McGlone, the senior commodity strategist at Bloomberg Intelligence, said Bitcoin would eventually catch up to Ethereum’s gains, thus leading to $100,000 by the end of 2021, more than double where it is trading at the time of writing.

Fundstrat Global Advisors’ Tom Lee also envisioned a six-figure bid for Bitcoin as long as it stays above its average price over the last 200 days — a long-term momentum measure.

The 5 Next Cryptocurrency Will Go Big In 2023

Amazon Layoffs are a Part of the ‘Voluntary Separation Program’