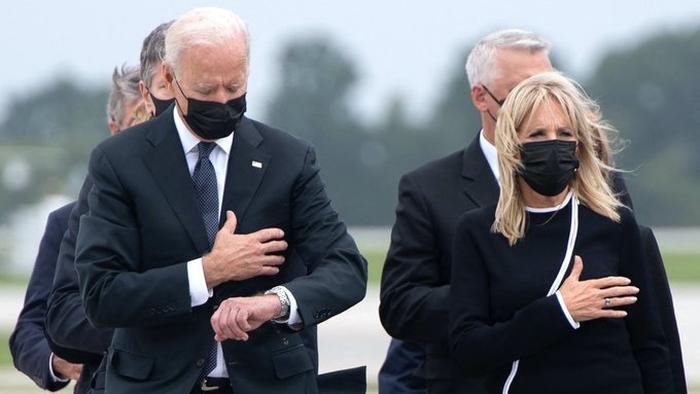 
After the Biden administration royally botched the Afghanistan pullout that they had seven months to plan for, the parents of marines slain in last week’s terrorist bombing outside the Kabul airport are livid.

In an obvious attempt to avoid yet another optics nightmare, President Biden made his way on Sunday to Dover Air Force Base, where he spoke privately with the families of the deceased – whose remains were flown in from Afghanistan.

The parents weren’t having it, according to the Washington Post.

Not only did Biden reportedly check his watch multiple times…

Gold Star Father Darin Hoover, whose son Marine Staff Sgt. Taylor Hoover was killed in Kabul, alleges that President Biden looked down at his watch when all 13 fallen service members arrived at Dover Air Force Base:

“That happened on every single one of them.” pic.twitter.com/PC83XWNWsx

…he repeatedly invoked his own son, Beau, who died six years ago of brain cancer and served in the Delaware National Guard.

Mark Schmitz had told a military officer the night before that he wasn’t much interested in speaking to a president he did not vote for, one whose execution of the Afghan pullout he disdains — and one he now blames for the death of his 20-year-old son Jared.

Biden did not seem to like that, Schmitz recalled, and he bristled, offering a blunt response: “I do know their stories.”

“When he just kept talking about his son so much it was just — my interest was lost in that. I was more focused on my own son than what happened with him and his son,” said Schmitz. “I’m not trying to insult the president, but it just didn’t seem that appropriate to spend that much time on his own son.”

“…when you’re the one responsible for ultimately the way things went down, you kind of feel like that person should own it a little bit more. Our son is now gone. Because of a direct decision or game plan — or lack thereof — that he put in place.”

Another Gold Star parent, Shana Chappell, wrote such a scathing indictment of Biden that Facebook and Instagram have reportedly disabled her accounts.

So, reprinted in its entirety (emphasis ours):

President Joe Biden Joe Biden This msg is for you! I know my face is etched into your brain! I was able to look you straight in the eyes yesterday and have words with you. After i lay my son to rest you will be seeing me again! Remember i am the one who stood 5 inches from your face and was letting you know i would never get to hug my son again, hear his laugh and then you tried to interrupt me and give me your own sob story and i had to tell you “that this isn’t about you so don’t make it about you!!!” You then said you just wanted me to know that you know how i feel and i let you know that you don’t know how i feel and you do not have the right to tell me you know how i feel! U then rolled your fucking eyes in your head like you were annoyed with me and i let you know that the only reason i was talking to you was out of respect for my son and that was the only reason why, i then proceeded to tell you again how you took my son away from me and how i will never get to hug him, kiss him, laugh with him again etc… u turned to walk away and i let you know my sons blood was on your hands and you threw your hand up behind you as you walked away from me like you were saying “ ok whatever!!! You are not the president of the United States of America Biden!!!! Cheating isn’t winning!!!You are no leader of any kind! You are a weak human being and a traitor!!!! You turned your back on my son, on all of our Heros!!! you are leaving the White House one way or another because you do not belong there!MY SONS BLOOD IS ON YOUR HANDS!!! All 13 of them, their blood is on your hands!!!! If my president Trump was in his rightful seat then my son and the other Heros would still be alive!!!! You will be seeing me again very soon!!! Btw as my son and the rest of our fallen Heros were being taken off the plane yesterday i watched you disrespect us all 5 different times by checking your watch!!! What the fuck was so important that you had to keep looking at your watch????You are nobody special Biden!!! America Hates you!!!!!

$FB has decided to censor the mother of a fallen Marine. The middle class parents of kids that are used as chattel for the elite wars don’t get a voice apparently.

This company is an extension of the security state. Tyranny is here and this act of censorship is proof.

Another Gold Star family – relatives of Marine Corps Lance Cpl. Rylee McCollum, did not want to meet with Biden.

“McCollum’s sisters and father joined his widow, Jiennah McCollum, on the trip to Dover — but when it came time to meet Biden, only Jiennah went in,” according to WaPo.

One of McCollum’s sisters felt Biden’s words were ‘scripted and shallow,’ and a conversation which only lasted a couple of minutes in “total disregard to the loss of our Marine — our brother, son, husband and father.”

“It had to be one of the hardest things he’s ever had to do,” said Schmitz. “You make some calls, here’s the aftereffect. It’s got to be difficult. I’m not saying it was easy at all. But you can’t run up and hug someone as if you had nothing to do with it. It’s not going to work that way when you’re commander in chief.”

Goldman Warns Oil Is ‘Down But Not Out’: The Good, Bad, & Ugly In The Energy Complex

Jennette McCurdy Is Ready to Move Forward, and to Look Back

Kansas Votes to Preserve Abortion Rights Protections in Its Constitution

If You Invested $1000 In Bitcoin Instead Of The Coinbase IPO, Here’s How Much You’d Have

A Stranger Filmed Her on the Train. TikTok Users Decided She Had Monkeypox.