is seen scaling the higher $70 per barrel region this week after Hurricane Ida shut the largest privately-owned US crude terminal and nearly half of the country’s refining capacity, with industry officials estimating that it could take weeks for supplies to normalize.

, meanwhile, is expected to face a first resistance of $1,830 an ounce—and attempt for mid-$1,800 if it crosses that—ahead of the for August due on Friday. 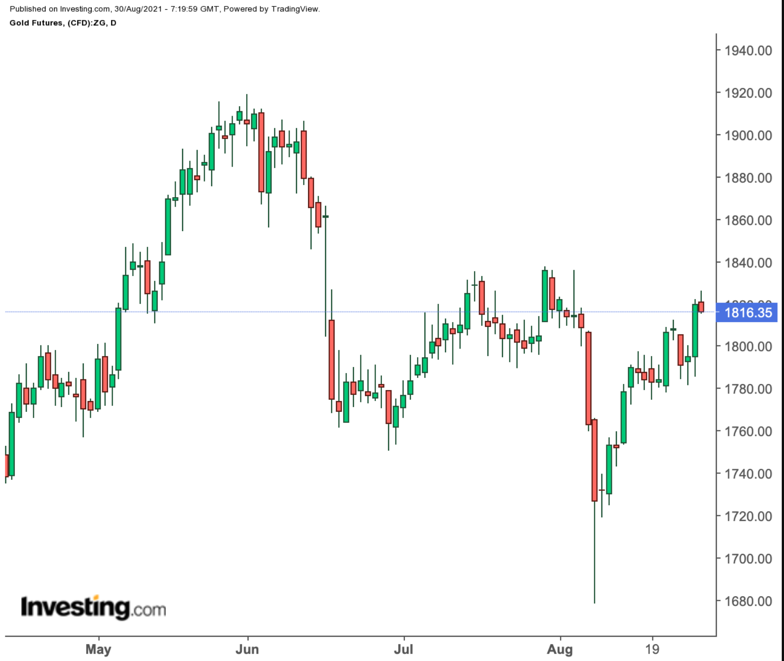 West Texas Intermediate, the benchmark for US oil, hit a three-week high of $69.61 in Monday’s pre-New York session as the closure of LOOP, or Louisiana Offshore Oil Port, paused crude deliveries to refineries.

London-traded , the global benchmark for oil, hit a four-week high of $72.67 per barrel.

LOOP, located 18 nautical miles (29 km) off the shores of Louisiana, is the largest private terminal of its kind in the United States and the only one in deepwater capable of offloading supertankers. It handles about 10-15% of the country’s domestic oil, 10-15% of the nation’s imports of foreign oil, and is also connected to about half of the US refining capacity. LOOP also services 90% of the Gulf of Mexico’s deepwater oil production.

It could take weeks for supplies to normalize, those familiar with the situation said.

“For a Category 4 (Hurricane), you could be looking at four to six weeks or more of downtime for the refineries,” Andy Lipow, president of Lipow Oil Associates LLC in Houston, said, Bloomberg reported.

Even before the LOOP shutdown, more than 95% of US Gulf of Mexico oil production had been suspended as a precaution over Ida. That represents about 1.74 million barrels per day of output. The Gulf supplies about 17% of the nation’s oil. Over 45% of total US refining capacity is also located there.

LOOP was formed in 1972 and became a limited liability company in 1996 as a joint venture between Marathon Pipe Line (NYSE:), Shell (NYSE:) and a unit of Valero Energy (NYSE:).

Other energy-related ports in southern Louisiana, including Houma and the Port of New Orleans, were also closed on Sunday. In Mississippi, the ports in Biloxi, Gulfport and Pascagoula and the Gulf Intercoastal Waterway were closed.

Front-month gold on New York’s COMEX hit a four-week peak of $1,826.30, extending Friday’s rally prompted by Fed Chairman Jerome ’s decision to delay a taper in the central bank’s stimulus spending that had boosted stocks, gold and other inflation-sensitive assets since the COVID outbreak 18 months ago.

But some analysts, including Sunil Kumar Dixit of SK Dixit Charting in Kolkata, India, expected a limited upside move for gold ahead of the jobs report.

“From this point, we expect a limited up move to $1,825 where sellers can try to establish a regional top, which may be further affirmed by price weakness below $1811-1800 support areas with $1,795 acting as important support.”

Economists have forecast a conservative US jobs growth of 728,000 for August. If the number turns out to be as good as July’s 943,000, it could bring US , which stood at 5.4% last month, closer to the 4% range that the Fed defines as a state of “full employment.” That could motivate the central bank to expedite a taper of the combined $120 billion in bonds and agency mortgage‑backed securities it has been buying since March 2020.

But if the jobs report disappoints, then all bets remain off for any immediate taper.

More than a year into the COVID-19 crisis, restoring job growth remains one of the biggest challenges of Fed policy makers. More than 21 million American jobs were lost between March and April 2020, at the height of business lockdowns forced by the coronavirus, and roughly 7 million have yet to be refilled, officials say.

To be sure, Powell zeroed in precisely on employment in his speech at Friday’s Jackson Hole Symposium where he decided to delay any taper in the Fed’s stimulus for now.

“The timing and pace of the coming reduction in asset purchases will not be intended to carry a direct signal regarding the timing of interest rate liftoff, for which we have articulated a different and substantially more stringent test,” Powell said. The Fed chair also stressed the need to avoid an “ill-timed policy move” amid continued new uncertainties from COVID’S Delta variant.

“Today, with substantial slack remaining in the labor market and the pandemic continuing, such a mistake could be particularly harmful,” the Fed Chair added.

“As a gold and investor, you want to see a prolonged recovery in the labor market, leading to a lengthier trajectory of the recent price recovery.”