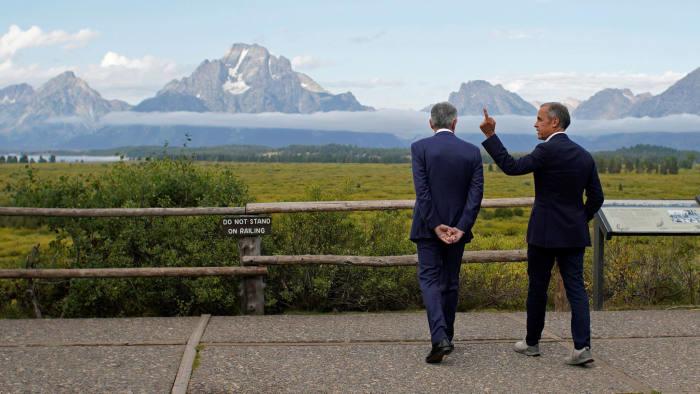 
By Philip Marey, Senior US Strategist at Rabobank

Yesterday the S&P500 closed 0.58% lower and this morning the 10 year US treasury yield is about 2 bps lower than before the Kabul airport attack, but the timing of the market movements suggests that this was not the decisive factor behind it. Hawkish comments from Fed speakers, the anticipation of Powell’s speech of Jackson Hole today, and perhaps even the somewhat disappointing jobless claims may have played a role in the cautious sentiment in the markets. Meanwhile, the second estimate of US GDP in Q2 (6.6%) did not differ much from the first estimate (6.5%).

Yesterday also saw the release of the accounts for the ECB’s July meeting, and they were somewhat hawkish sounding. As our ECB-watcher Bas van Geffen noted, the policy discussion mainly focused on the new rates guidance, with limited reference to the other instruments. In fact, “there was general agreement to defer the discussion on the APP forward guidance to a future meeting.” That said, asset purchases were discussed as part of the new guidance: “it was remarked that a recalibration of the interest rate forward guidance could be erroneously perceived by market participants as necessarily implying a longer period of net asset purchases owing to the link between rate guidance and forward guidance on the asset purchase programme (APP).” With the accounts further noting that “[the new forward guidance on rates] did not necessarily imply “lower for longer” interest rates if it ultimately succeeded in anchoring inflation expectations at the target” […] if credible, should reduce the extent to which other instruments needed to be deployed.”

That can be interpreted as somewhat more hawkish, and it adds some risk of a bigger redesign of the forward guidance on asset purchases – potentially cutting the explicit link with the timing of the first rate hike. That said, it is still very much a hypothetical and the remarks that the new rate guidance may “lower the required volume of asset purchases” was clearly conditional on the new rates guidance being successful in boosting inflation (expectations). The second element that made for a slightly hawkish read was the remark that “risks to the inflation outlook, as embodied in the June Eurosystem staff projections, were widely regarded as increasingly tilted to the upside.” Yet, these risks mostly relate to the short-term, and the medium term outlook remains more uncertain. Indeed, in his assessment of the economy, Lane continued to emphasize inflation as mostly transitory.

At 10am ET, Powell will give his Jackson Hole speech on the economic outlook. This could have been the event where the Fed Chairman gave us “advance notice” of tapering. However, it is more likely that we will have to wait for the September meeting of the FOMC for this early warning signal. At best, Powell may give us another verbal stepping stone toward “advance notice” by a modest change in language, similar to July’s addition that the economy has made progress since December. Powell may also use this speech to stress that there is no mechanical link between the timing of tapering and the start of the hiking cycle. Although many FOMC participants prefer to end tapering before the start of the hiking cycle, they want to make clear that the first rate hike does not automatically come directly after the end of tapering.

Meanwhile, it is important to remember that what Powell is telling us is a consensus story. In contrast, the minutes of the last meeting of the FOMC in July revealed that there is a rift between participants about the start of tapering. Yesterday’s comments by Fed speakers Kaplan, George and Bullard were clearly coming from the hawkish camp. Kaplan (Dallas Fed) wants to announce the start of tapering in September, slowing down asset purchases in October or November. After looking at the latest data he thinks that Americans are adjusting to the Delta variant. George (Kansas City Fed) said that Delta could slow down the labor market somewhat, but she does not expect it to derail the economy. She thinks it is important to get started with tapering. Bullard (St. Louis Fed) also want “to get going on taper”, despite Delta.

For more details about the internal divisions in the FOMC we refer to Below Deck Fed, but this underlying fracture could have an impact on the taper schedule. While there are appears to be a majority for a November decision to start tapering, keeping everybody on board could still delay this decision to December. However, economic reasons could also be responsible for a delay. From this perspective, it will be  interesting to hear what Powell has to say about the economic outlook, and the possible impact of the Delta variant of COVID-19 in particular.

Prior to Powell’s speech, at 8:30 ET, US personal income and spending for July will be released. This includes the PCE deflator, the Fed’s preferred measure of inflation. The consensus expectation is a further rise to 4.1% in year-on-year terms. In his speech, Powell will stress again that the currently high level of inflation is transitory.

Meanwhile, rumors are that Biden’s advisors are thinking about nominating Lael Brainard as the Fed’s Vice Chair for Supervision at the same time as nominating Powell for a second term as Fed Chair. This is supposed to appease the progressives in the Democratic Party who want to get rid of Powell. Many of them think that Republicans Powell and Quarles (the current Vice Chair for Supervision) have not been strong enforcers of regulation. However, the progressives would rather see Brainard as the new Fed Chair.