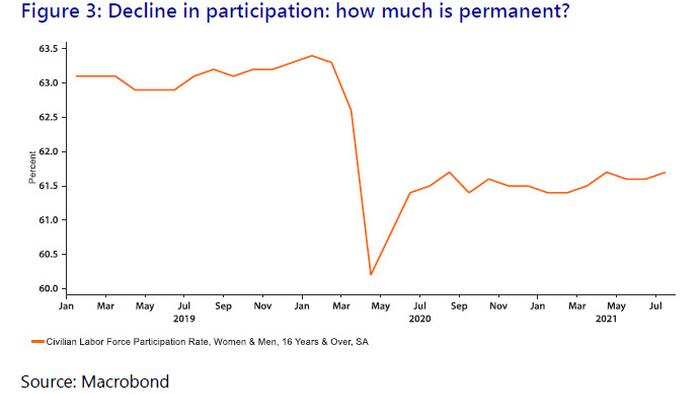 
By Philip Marey, senior US strategist at Rabobank

Although employment is still well below pre-COVID levels (about 5.7 million in July, Figure 1), employers are having a difficult time filling their vacancies. The ratio of unemployed persons to job openings, a measure of labor market looseness, fell to 0.94 in June, comparable to levels in 2018 (Figure 2), when the Fed accelerated the hiking cycle to four hikes in one year, because it mistakenly saw high inflation around the corner This paradox, a shortfall in employment and an apparent labor shortage, has been attributed to a number of factors causing a temporary labor shortage. Three main causes are often being mentioned: the enhanced federal unemployment benefits from the American Rescue Plan, fear of COVID, and lack of child care.

View from the right: Unemployment benefits

Obviously the first cause is most often mentioned by Republicans, so it should come as no surprise that many red states are withdrawing from the enhanced federal unemployment benefits program. At present, almost half of the states has removed the $300 weekly enhancement. The argument is that due to these enhanced benefits it is more attractive to be unemployed than to accept, or stay in, a job. However, a static comparison between wages and unemployment benefits in a specific month can be misleading. The decision to accept or leave a job requires a longer-term horizon, especially in a depressed labor market. Expected future cashflows as well as the probability of getting a job offer in the future will have to be considered. This may explain why several empirical studies (Bartik et al. 2020, Scott & Finamor, 2020 and Petrosky-Nadeau, 2020) on the $600 unemployment benefit from the CARES Act fail to find any significant impact of enhanced unemployment benefits on job losses or rehiring. A more recent study (Petrosky-Nadeau & Valletta, 2021) does find a “small but likely noticeable” effect: 1 out of 7 job offers would be rejected because of the $300 enhanced unemployment benefits in 2021. On balance, the empirical evidence suggests that the current program of $300 enhanced benefits does make a modest contribution to the labor shortage, but it does not seem to be the only factor. What’s more, this effect should disappear once the benefits expire after September 6. Nevertheless, for states with relatively low unemployment rates it does make sense to opt out of the enhanced federal benefits program.

View from the left: COVID and child care

As we shift to the left side of the political spectrum, fear of COVID and lack of child care are increasingly given as explanations for the current labor bottlenecks. As we have pointed out earlier, the Democrats want to make the child tax credit enhancements in the American Rescue Plan permanent. However, their claim seems to be supported by the data. First of all, up to a third of the US workforce has children aged 14 or younger in the household (Dingel et al. 2020). This means that the reopening of schools and daycare centers could be an important bottleneck for labor supply. Especially, the participation of women in the labor market could be severely affected. In fact, there is empirical evidence (Lofton et al., 2020) that the labor supply of mothers was less depressed in states that reported less disruption to schooling. Meanwhile, it appears that businesses are reopening at a faster pace than schools. By the end of this past school year, only 53% of schools had fully reopened for in-person instruction (Ferren, 2021).

Taking the views from the right and the left together, there is empirical evidence there is a temporary labor shortage caused by the phase of the COVID crisis and fiscal policy. Consequently, once COVID subsides, schools have reopened and enhanced federal benefits have expired, labor supply is likely to rebound and we should be back to an overall looser labor market, apart from scarcity in certain specific occupations.

However, while part of the decline in labor participation (Figure 3) can be explained by child care considerations, fear of COVID and enhanced unemployment benefits, there is also a more permanent factor reducing participation: retirement. According to calculations made by the Dallas Fed (Kaplan et al. 2021) a few months ago, in addition to 4.1 million joining the unemployed since February 2020 there were 4.4 million not currently actively looking for work: 1.3 million because of caregiving and 2.6 million because of retirement. The caregivers may largely return when schools reopen, but how many retirees will return to the labor market? After all, it appears that many already delayed retirement during the tight labor market of 2018-2019. These figures suggest that retirement is playing a larger role than child care, which also means that the permanent decline in participation may be larger than many are now thinking.

For the Fed a temporary labor shortage means that upcoming monetary policy decisions – such as giving signals about tapering – will have to be made in a noisy environment where data are being distorted. We called this the “data fog” in Early Warning Signal in a Noisy Environment. Employment growth is temporarily slowed down, but should accelerate once the causes of the temporary labor shortage fade.

However, once we come out of the data fog, we may be closer to the brick wall than anticipated. If there is also a permanent component to the decline in labor participation, then slack in the labor market is smaller than suggested by the downdraft in the employment level (Figure 1). For the FOMC, the smaller the shortfall in employment the earlier they may want to hike. The higher-than-expected inflation readings in recent months have already led to an upward shift in the dot plot, indicating that the FOMC now expects to hike twice in 2023, instead of waiting until 2024. If more of the “temporary” labor shortage turns out to be permanent, the FOMC may be forced to shift its first hike to 2022.