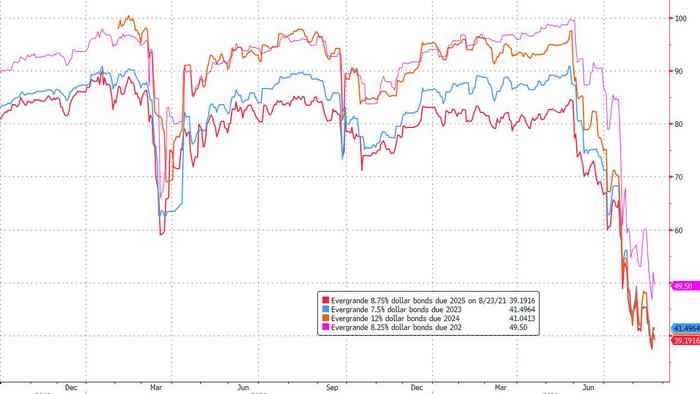 
It’s just keeps going from bad to catastrophic for China’s largest and most indebted developer, Evergrande.

Just days after Chinese authorities called for indebted (some would say insolvent) property giant Evergrande to resolve its debt risks during a rare meeting with executives Thursday and warning it to refrain from spreading “untrue” information, and not long after Evergrande – which has debt of more than $300 billion making it one of China’s most systematically important companies – pulled the short stick when Beijing decided to bail out China’s original bad bank Huarong but left Evergrande out in the cold, shares of the Chinese property giant sank to a fresh six-year low amid mounting concern that shareholders will bear the brunt of the developer’s liquidity crisis.

Shares of Evergrande, which had lost 60% of their value coming into this week, crashed 12% on Monday in Hong Kong to close at the lowest since September 2015, while China Evergrande New Energy Vehicle Group – the company’s electric-vehicle unit – cratered 27%, the most since October 2015.  Completing the trifecta was the group’s property services unit, which plunged 9%.

The catalyst for the latest blow to shareholder in the Shenzhen-based Evergrande, which is liquidating assets including stakes in units to avoid a cash crunch following a regulatory crackdown on leverage in the property industry,  was a report that Evergrande may sell its Hong Kong headquarters building at a loss.

According to Bloomberg, the developer plans to sell the office tower to Yuexiu Property Co. for just HK$10.5 billion ($1.3 billion), a third less than the HK$15.6 billion it sought, Sing Tao Daily reported. It acquired the building for HK$12.5 billion in 2015. This means that the company’s last recourse at obtaining liquidity – via asset sales – may falter if its assets prove to have a far lower value than ascribed by the market.

While Evergrande stock was slammed, the bond market reacted more positively to the news of the building sale plans, which could help Evergrande meet upcoming debt repayments and/or provide greater recoveries for bondholders in a bankruptcy. Its note due 2022 climbed 0.6 cent on the dollar to 49.5 cents.

As noted above, in a first for China, financial regulators last week issued a rare public rebuke of Evergrande, urging it to address its debt woes and refrain from spreading “untrue” information (leading to growing speculation that unlike Huarong, Beijing just make let Evergrande collapse sparking a bond market crisis). The company said it will do its best to resolve debt risks and keep stability in housing and financial markets.