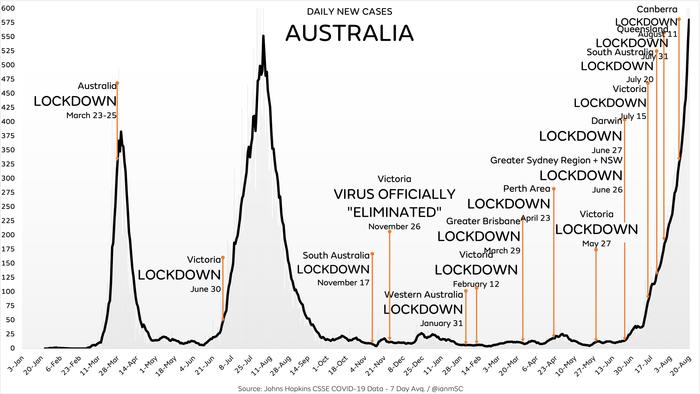 
Something “unexpected” is happening in Australia, which is following the “science” to a tee: despite round after round of increasingly draconian lockdowns which have also led to a growing number of protests across the nation…

… the number of Covid cases continues to rise precipitously and on Saturday the country set a record with 914 infections, its highest daily figure, even as the southern and eastern states of New South Wales, Victoria and the Australian Capital Territory remain under a strict lockdown.

New South Wales saw 830 new infections on Sunday, despite stepped-up efforts, and the Australian Capital Territory, home to the capital, Canberra, had 19. Nationwide, the tally of active cases stands at nearly 12,000. The southeastern state of Victoria, in its sixth lockdown since the start of the pandemic, recorded 65 locally acquired cases on Sunday.

This outcome, which should not have happened if lockdowns worked, prompted Prime Minister Scott Morrison to “rethink” the extremely unpopular strategy of escalating lockdowns, according to Bloomberg. Speaking on Sunday, the PM said that Australia will stick to its lockdown strategy against the coronavirus until at least 70% of its population is fully vaccinated, but after that it will have to start living with the virus, effectively giving up on its “zero covid” strategy.

“You can’t live with lockdowns forever and at some point, you need to make that gear change, and that is done at 70%,” Morrison said in a television interview on the Australian Broadcasting Corp’s Insider program.

“I know it seems pretty dark now, but it’s always darkest before the dawn, and dawn’s coming. So please hang in there” he concluded.

Both New Zealand and Australia have been advocates of the Covid Zero strategy since the beginning of the pandemic. Their tactics of closing borders and stopping cases of community transmission through strict restrictive measures prevented the waves of deaths seen in most other nations. The recent spread of the delta variant has challenged their strategies, with Australia on Sunday reporting its highest number of daily infections for a second straight day and New Zealand under the top level of lockdown.

But whereas lockdowns have been a key element of the federal government’s strategy to rein in outbreaks until the 70% percent level is reached, in a departure from the zero-COVID strategy adopted since the pandemic began, Morrison said it was highly unlikely for Australia to reach zero cases before curbs can be eased.

“Lockdowns are not a sustainable way to deal with the virus and that’s why we have to get to the 70% and 80% marks, so we can start living with the virus,” he added.

The highly infectious nature of delta raised some “pretty big” questions about New Zealand’s approach of eliminating the disease, Covid-19 Response Minister Chris Hipkins said in an interview on TVNZ.  “With a virus that can be infectious within 24 hours of someone getting it, that does change the game a bit,” Hipkins said. “With our Level Four lockdown, we are very well placed to be able to run it to ground, but we have to be prepared for the fact that we can’t do that every time there is one of these.”

Hipkins said the system had worked well pre-delta, but it was now looking “less adequate and less robust.”

Meanwhile, about 60% of Australia’s population of 25 million is now under lockdown. Stay-at-home orders, often lasting for months, have taxed the patience of many and on Saturday, Australian police arrested hundreds of anti-lockdown protesters in Melbourne and Sydney.  Mounted police used pepper spray in Melbourne to break up crowds of more than 4,000 surging toward police lines, while smaller groups of protesters were prevented from congregating in Sydney by a large contingent of riot police.

Victoria state police said that they arrested 218 people in the state capital Melbourne. They issued 236 fines and kept three people in custody for assaulting police. The arrested people face fines of $3,900 each for breaching public health orders.

Police in the most populous state of New South Wales said they handed out 940 fines in the past 24 hours for breaches of public health orders, while media said several hundred people gathered to protest Sunday curbs at the Queensland state border. This follows hundreds of arrests made by police on Saturday during anti-lockdown demonstrations in Sydney and Melbourne, the capitals of the two most populous states, New South Wales and Victoria, which are under a strict lockdown

Just about 30% of Australians older than 16 have been fully vaccinated, health ministry data showed on Saturday. This is mainly because the Pfizer vaccine is in short supply and the AstraZeneca vaccine provokes public unease.

Despite a third wave of infections from the Delta variant, Australia’s COVID-19 numbers are relatively low, with just under 44,000 cases and 981 deaths. This, however, pales in comparison to New Zealand’s decision to impose the highest level of lockdown since Tuesday after a community case of coronavirus was discovered in Auckland. On Sunday, the country reported a further 21 local cases, bringing the total to 72.