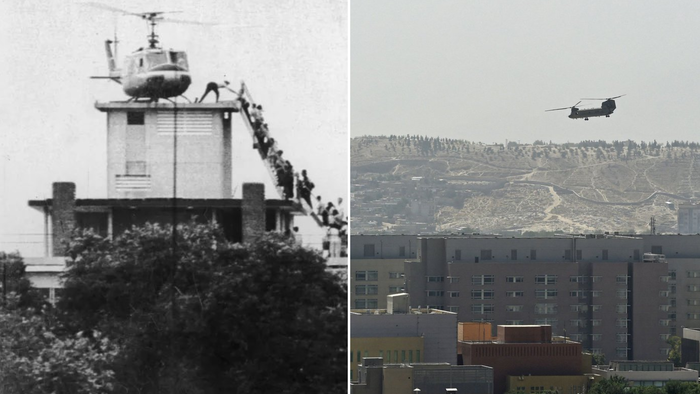 According to David Halberstam, when Washington was considering escalating its presence in Vietnam, a wargame was held to test options. More bombing aircraft were put into airfields in Vietnam; Red attacked the airfields. Blue brought in more troops to guard the airfields; Red started attacking the supply lines for those troops (Note: by tradition, going back to the first Prussian Kriegsspiel, your side is “Blue”, the other side is “Red”. Soviets did it the other way round.). More troops to guard the supply lines; more attacks on their support systems. And so on: everything the American side thought up was quickly and easily countered by the Vietnam team. The results were ignored: only a game, not really real.

Forward to 2002 and a very large and complicated exercise simulating a US attack on – not named, but obviously – Iran. The retired USMC general playing Red – a no-nonsense experienced soldier who didn’t believe technology was the answer to everything (especially the projected wonders that the wargame granted to the American side), scorned business-school buzzwords like “network-centric” – thought outside the box and used low-tech weaponry. When the US high-tech took out his communications, as he knew they would, he went silent – his communications were by motorcycle dispatch riders, coded messages in Friday prayers and similar old-school techniques. He fired more missiles that the Blue side could handle and sank most of the invasion force and finished off the rest with swarms of small boats.

“The whole thing was over in five, maybe ten minutes“. The invasion force was brought back to life, the rules were modified to reduce the defenders’ abilities – the Red force commander was on the point of destroying the reconstituted landing forces – and the US side “won”. He walked out when he decided that the game was too rigged for him to bother doing anything; as he said in a report: “this whole thing was prostituted; it was a sham intended to prove what they wanted to prove.”

Each of these wargames was supposed to be a learning and testing experience. The first was testing what to do and how to do it in Vietnam, the second, more ambitious, was supposed to test the whole package of the new US military in every aspect – it is said to have cost a quarter of a billion dollars and involved 13,000 participants. What was learned from the two? Certainly nothing was learned from the Vietnam wargame – Washington went ahead and put troops in – just a few at first but rising to an incredible 500,000 at the height and dropped a fantastic number of bombs; corners were turned, light was seen at the end of the tunnel but everyone knew it was a lost cause and no one wanted to say so. The enemy countered and endured everything and, at the end, the US went home defeated. The war game turned out to be a rather accurate predictor of the future. And it doesn’t appear that the US military have learned anything from the 2002 experience either. Certainly nothing in Washington’s behaviour towards Iran gives the impression that the US leadership imagines it could be defeated if it attacks Iran.

Nor, come to think of it, is there evidence that it learned anything much from the Vietnam reality either. Afghanistan was, in many respects, a replay of Vietnam: a determined low-tech force countered everything the US military could think up. In 2018, Les Gelb, the compiler of the Pentagon Papers said:

You know, we get involved in these wars and we don’t know a damn thing about those countries, the culture, the history, the politics, people on top and even down below. And, my heavens, these are not wars like World War II and World War I, where you have battalions fighting battalions. These are wars that depend on knowledge of who the people are, with the culture is like. And we jumped into them without knowing. That’s the damned essential message of the Pentagon Papers.

And now we move forward two decades. Last October another wargame simulated a US defence of Taiwan against a Chinese attack. Another test of some high-falutin war-fighting concept. (One might parenthetically ask how many of these concepts are actually business-school ideas given the predilection of  US generals for MBAs. Probably the worst imaginable preparation for what our USMC “Iranian” commander called a “terrible, uncertain, chaotic, bloody business“.) General John Hyten, Joint Chiefs of Staff Vice Chairman, reported on the wargame:

Without overstating the issue, [Blue force] failed miserably. An aggressive red team that had been studying the United States for the last 20 years just ran rings around us. They knew exactly what we’re going to do before we did it.

The first thing that went wrong for the Blue force was that it suddenly lost all its communications – as I have been saying (and the Chinese and Russians surely know) one of the fundamental assumptions of the US style in war-fighting is constant, reliable, assured communications. All its “smart” weapons need to be “talking” to their controllers all the time: stop the “talking” and they become immediately “stupid”. Then the US force was hit with wave after wave of missiles. And the rear areas were hit with waves of missiles. And that was that. And, in another wargame in 2020, Poland was annihilated by the Russians: Warsaw was surrounded in five days.

US intelligence agencies who said just 4 days ago that Kabul could fall in 90 days have revised the figure to 72 hours
https://t.co/v2XUuPVcKX

What stood out for me in Hyten’s refreshingly honest presentation was this: “studying the United States for the last 20 years”. Washington officials are not noted for their ability to see things from the other side’s point of view, but he certainly got that one right. China (and Russia and Iran) know that they are on Washington’s hitlist. They have been watching Washington fight wars for two or three decades (winning none of them, despite the hype); they know how Washington fights; they know its strengths and weaknesses. They have put a lot of thought into it. One might also observe that, while Washington fights its wars safely overseas, China, Russia and Iran have very strong memories of wars fought on their own territory. This gives them, as Andrei Martyanov is always pointing out, a rather different view of war – it’s not some affair of choice far away over there, it’s a horrible, deadly, bloody, immensely destructive process in your own home.

The United States has zero historic experience with defending the US proper against powerful and brutal enemies. It is a cultural difference, a profound one and it manifests itself across the whole spectrum of activities, not just the respective military-industrial complexes. In other words, Russians MUST build top of the line weaponry, because the safety of Russia depends on it.

Losing for them is not the American way of losing – no walking away, explaining away and forgetting away: it’s life or death. They take war seriously and they put the effort into thinking about how to defend themselves against an American attack. They know that air superiority and assured communications are the necessities of the American way of war; they know the US military expects to accumulate huge forces undisturbed. They haven’t used these years idly; they won’t wait for the Americans to leisurely assemble the force to bomb them. That’s why they have concentrated on EW and lots of missiles. The US won’t have secure communications, free air power or safe bases: Beijing. Moscow and Tehran, if they have to fight, will fight to win. And do whatever it takes; no umpire will appear to “call foul” and re-float the fleet.

In the real world, Ukraine’s “de-occupation” boasting was silenced in two weeks by a huge Russian mobilization. Surely somebody in the Pentagon noticed that. HMS Defender’s adventure off Crimea (incidently the only one of the six ships of its class actually fit for sea – not, in itself, a very impressive performance) may also have taught some lessons about the consequences of silly gestures.

Nothing was learned from the Vietnam or Iran wargames, what about this one? General Hyten said:

“…the U.S. has reevaluated the joint warfighting concept. He said the new strategy being developed is “not quite a clean-sheet approach, because you can never take a clean sheet of paper if you want to get between now and 2030, you have to start with what you have.”

That sounds good – “clean-sheet” – but you know that nothing will really change. Vietnam was supposed to teach a lesson (and the US Army certainly did improve) but, essentially, it did the same things all over again in Afghanistan. For twice as long. I doubt that this exercise will cause the full-scale change that he’s talking about. Complacency will probably return.

Even so, one would like to be a fly on the wall when US senior military brief the President: “failed miserably”, Afghanistan defeat (coming soon to Iraq and Syria), Russian and Chinese military power, hypersonic maneuvering missiles, EW, layered air defence. The briefings can’t be too upbeat, can they? Could this be why the big exercise in the Black Sea ended so quietly? Could this be in the background of the decision to stop trying to block Nord Stream? Could this be a reason why Biden asked to meet with Putin? The couch-warriors will never understand this of course, but perhaps one can hope that the generals will – Hyten seems to have but, just as American wars are a sequence of one-year wars because each commander kicks the failure down the road for his successor to worry about, his replacement may return to the complacency of being at the top of “the greatest military in the history of the world“.

But, one can hope they’ll learn a little humility.