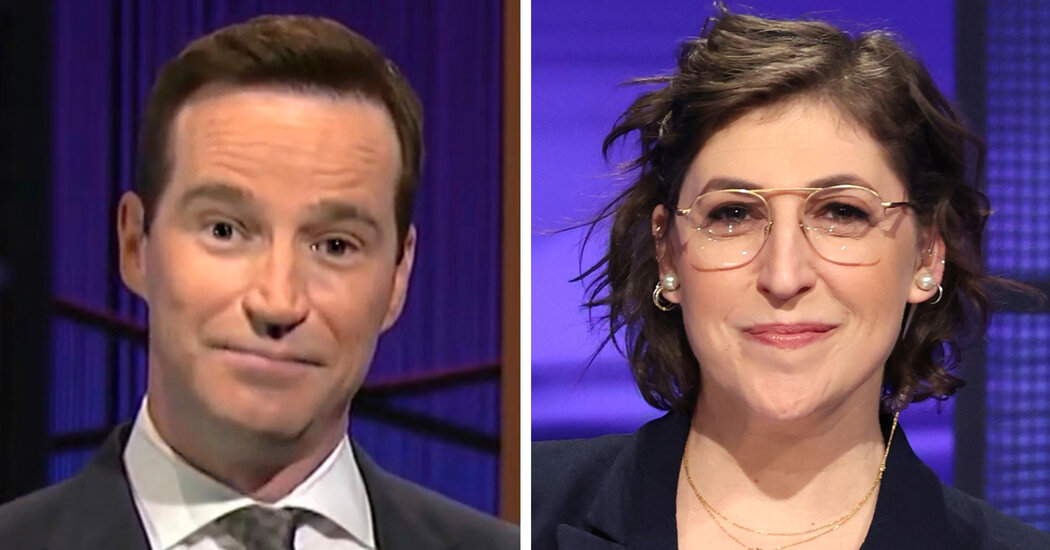 
After the death of the longtime “Jeopardy!” host Alex Trebek, the game show has decided that it will take not one — but two — people to fill his shoes: Mike Richards, the show’s executive producer, will become its new regular host and the actress Mayim Bialik will take over for prime time specials.

The move puts an end to months of speculation on who will replace Trebek, who had been hosting the show for 36 years when he died of pancreatic cancer.

Bialik, who is known for her roles in the sitcoms “The Big Bang Theory” and “Blossom,” will be the first woman to be a permanent host of “Jeopardy!” Her role will include hosting a new college championship tournament set to air next year on ABC. The Daily Beast was first to report the news.

As the show’s executive producer, Richards already has one of the top roles on the program and has been involved in strategizing how to keep the show going past the Trebek era.

“Never in my wildest dreams could I have imagined being chosen to step into a role of this magnitude,” he said in a news release.

For more than seven months, “Jeopardy!” — which reports a weekly audience of more than 20 million — has tested out over a dozen guest hosts, including Richards and Bialik. Some of the hosts were established television personalities who seemed unlikely to take on the permanent hosting role, such as Anderson Cooper and Katie Couric. Others, like LeVar Burton and Ken Jennings, seemed to be auditioning for the job as they presented clues and bantered with contestants onstage.

“A senior group of Sony Pictures Television executives pored over footage from every episode, reviewed research from multiple panels and focus groups, and got valuable input from our key partners and ‘Jeopardy!’ viewers,” Ravi Ahuja, a Sony executive, said in the release.

Speaking live on Instagram on Wednesday, Bialik praised Richards, noting that he would be “the syndicated host, which is like the everyday person, like when I guest-hosted” and that she had “been chosen as the person to do other ‘Jeopardy!’ things.”

She suggested that her role may be fluid as “Jeopardy!” develops new spinoffs. “Name it and they may dream it up for me to host,” she said, lying in bed under the covers. She went out of her way to praise Burton, whom she has worked with before, and who had a large fan base pushing for him to be named host.

When Variety magazine published an article last week saying that Richards was the top candidate for the job, there were decidedly mixed reactions; some on social media expressed disappointment that an executive with influence over the succession battle would end up being the winner. (Some made comparisons to Dick Cheney, who was tasked with vetting possible running mates for George W. Bush in 2000, only to take the job himself and become vice president.)

In an email to “Jeopardy!” staff that the show released to the media earlier this week, Richards — who was the host of a reality show called “Beauty and the Geek” — wrote that he was “humbled and deeply honored” when he was asked if he would consider hosting the show.

“The choice on this is not my decision and never has been,” Richards wrote. “Alex always believed the game itself and the contestants are the most important aspects of the show.”

In his note, Richards also addressed an employment lawsuit against “The Price Is Right” when he was an executive producer, a controversy that resurfaced online when his name was floated for the host position. In 2010, one of the game show’s former models, Brandi Cochran, filed a pregnancy discrimination lawsuit against the show, CBS and others, saying that after she revealed she was pregnant, she was repeatedly taken out of acts she would have appeared in before and was denied the chance to return to work after she took maternity leave.

According to the lawsuit, after Cochran revealed on air that she had been carrying twins, Richards put his face in his hands and said to her, “Twins? Are you serious? … You’re serious?” The case went to trial and the jury sided with Cochran, awarding her about $8.5 million, but the decision was later overturned and a judge ordered a new trial. The sides ultimately settled in 2016.

Richards wrote in his note to “Jeopardy!” staff, “The way in which my comments and actions have been characterized in these complaints does not reflect the reality of who I am or how we worked together on ‘The Price Is Right.’”

He added, “I would not say anything to disrespect anyone’s pregnancy and have always supported my colleagues on their parenting journeys.”

In another lawsuit, another former “Price Is Right” model, Lanisha Cole, said in 2011 that Richards refused to speak with her for an unknown reason and, instead, sent messages to her via other staffers on the show. Richards was ultimately dropped as a defendant in the case, which was settled outside of court. Richards did not address that lawsuit directly in his note.

A statement from Sony Pictures said company representatives had spoken with Richards about the issues raised in the lawsuits and about their “commitment to maintaining a workplace environment where our employees are respected and supported.”

When Bob Barker left “The Price Is Right” after 35 years of hosting, Richards auditioned for the job but did not get it. He was later brought on as an executive producer tasked with helping to figure out how the show could thrive with Drew Carey as its new host.

In an interview in January about the challenge of replacing Trebek, Richards said he wanted to take the transition slowly and noted that there would be enormous pressure on whoever was chosen.

“Alex is a legend — there’s no two ways about it,” he said. “Replacing a legend is going to be nerve wracking; if you’re not nervous then you’re not paying attention.”

Episodes for the new season, the show’s 38th, will start airing on Sept. 13.