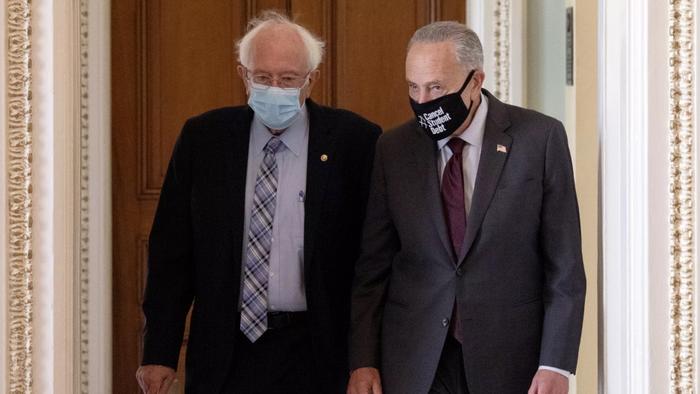 
Just hours after passing the a $1.2 trillion infrastructure package during a “bipartisan” vote, Chuck Schumer and the rest of the Democrats regrouped for another session of all-night debate on a series of proposed amendments, before eventually passing President Biden’s $3.5 trillion budget blueprint in a party-line vote, 50-49 (Sen. Mike Rounds of South Dakota was the lone absentee).

What has been characterized as Biden’s “stimulus” budget expands health-care, infrastructure, immigration jobs, housing, education, and climate (for a copy of the bill and a rundown on its contents, see here). To be sure, the final bill looks slightly different, after 47 amendments were voted on and 28 were adopted during the all-night “vote-a-rama” that lasted into the early morning hours on Wednesday, when the final vote was finally taken.

The budget bill includes the rest of President Biden’s $4 trillion economic agenda, setting in motion “the largest expansion of the federal safety net in nearly six decades” according to the NYT”.

Among other things, it will expand Medicare to include dental, health and vision benefits, fund Dems’ climate change agenda, as well as free prekindergarten and community college – partially offset by higher taxes on the wealthy, businesses and corporations (though a Republican amendment shielding small businesses from increased taxes was also passed).

As a reminder, the budget resolution includes few details about the ultimate spending plan: instead it consists of broad top-lines that committees will use to start formally drafting their bills. The final package is approved during the reconciliation process, which isn’t expected until late September.

For example of one provision that hasn’t been fully fleshed out: Democrats included a provision in the budget resolution for “lawful permanent status for qualified immigrants” and border security measures, but they haven’t specified who would qualify only providing the Judiciary Committee with a price tag for its bill, but no guidance on what they should include in it.

Democratic unity on the final package isn’t guaranteed: Arizona Sen. Kyrsten Sinema has raised concerns about the price tag and West Virginia’s Joe Manchin has expressed concerns both about the debt and some of the energy language. It could take months for Dems’ to negotiate a final package that garners the support of Democrats. Schumer is pushing for first drafts of the legislation by Sept. 15.

During the vote-a-rama, Republicans “pelted” Democrats with “politically freighted” amendments. After a total of more than 14 hours of votes, 47 amendments were eventually passed, including a ban on “critical race theory”, votes to create new law enforcement positions and officially oppose measures to defund the police. Other amendments adopted include calling on the IRS to respect the privacy of small businesses, opposing a fracking ban, supporting improvement of internet service in Cuba, and support for withholding grants for cities that defund the police. Adopted amendments also opposed penalties for state or local governents to cut taxes,

BREAKING: The Senate has voted 50-49 to pass @SenTomCotton‘s amendment to prohibit federal funds from being used to promote critical race theory in K-12 schools.

The fight against CRT has gone national—and Sen. Cotton is leading the way.pic.twitter.com/6MpA8hDhpb

Perhaps the biggest of the Republican amendments included a ban on “critical race theory”, votes to create new law enforcement positions and officially oppose measures to defund the police

Schumer praised the budget as the result of “many labors”.

“Democrats have labored for months to reach this point, and there are many labors to come,” said Senator Chuck Schumer of New York, the majority leader. “But I can say with absolute certainty that it will be worth doing.”

Republicans immediately attacked the budget as a reckless and unnecessary increase in spending that could cripple America’s already stretched financial position.

The House plans to take up the bill during the week of Aug 23. The budget must be passed by the entire chamber before a reconciliation bill can be approved in late September.

Readers can find the 92-page budget resolution below: