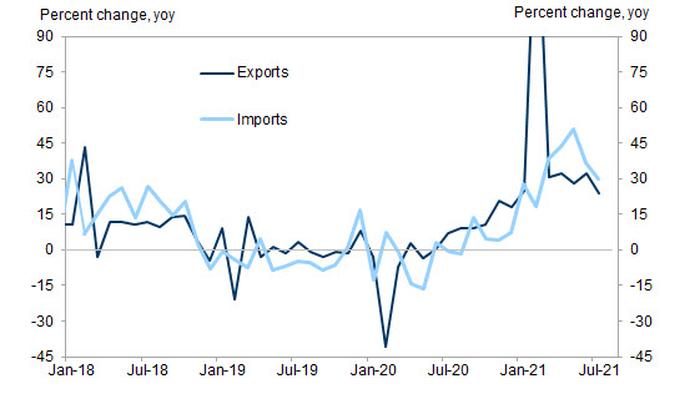 As a result this disproportional slowdown in imports vs exports, China’s monthly trade surplus actually rose to $56.6bn in July, slightly better than the $53.3BN consensus, and up from $51.5BN in June due to the bigger miss in imports.

ASEAN was China’s biggest trading partner in July, followed by the Europe Union and the U.S., customs data showed. China’s exports to the US grew 13.4% in July from a year ago, while imports from America rose 25.6%, leaving a trade surplus of $35.4 billion in the month.

While China’s exports had remained resilient in the first half, as gradual easing of lockdown measures around the world helped to support global demand, trade risks have increased in recent months as the delta variant has spread across China…

… threatening to snarl supply chains across the region and disrupting production and shipping in parts of China, leading to record-high freight costs which have squeezed exporters’ profits. As the map below shows, recent cases have been identified in heavily commercial regions which if left uncontained could lead to even more shipping chaos.

It’s not just covid: according to Goldman, exports and imports both fell sequentially in July partially due to typhoon-related disruptions to the operation of major ports around Yangtze River Delta in late July. While the operations of major ports haven’t been affected by the ongoing local outbreaks so far as Shenzhen ports during the outbreak in June, it’s worth watching out whether intercity traffic restrictions may disrupt exports in August.

Meanwhile, growth in imports has remained robust, supported by the ongoing recovery in domestic demand and high commodity prices. Imports of commodities including iron ore, crude oil and steel grew in value in the first seven months of the year, but dropped in volume during the same period. Purchases of 25 aircraft in July also helped to support import growth.

In any case, the slowdown in trade has added to growing concerns about a Chinese slowdown in the second half which has also led to a bottoming in China’s credit impulse as Beijing seeks to inject another substantial dose of credit into the economy.

The latest purchasing managers surveys also showed a contraction in manufacturers’ export orders for a third consecutive month in July. Officials have also warned of a slowdown in trade growth in the second half, with a higher base of comparison from a year ago also a likely factor.

“Leading indicators suggest export may weaken in coming months,” said Zhang Zhiwei, chief economist at Pinpoint Asset Management. “Exports and the Covid outbreak are the main sources of uncertainty in China for the next few months.”