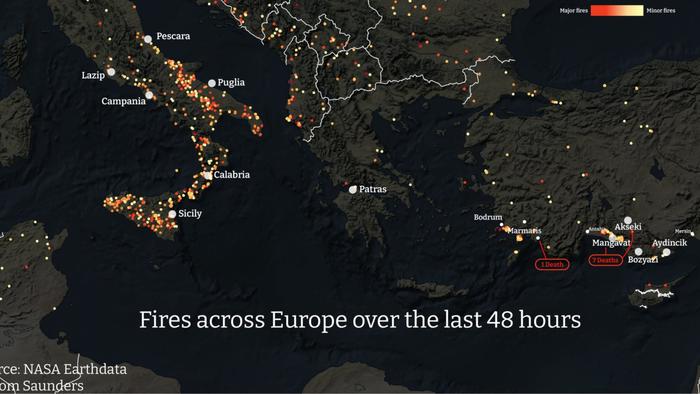 
A dangerous heat wave is ravaging parts of southeastern Europe resulting in wildfires across Turkey, Greece, and Italy, according to VOA News.

Firefighters across the European Union arrived in Turkey on Monday. The wildfires have burned for at least one week as political opposition mounts against President Recep Tayyip Erdogan for his sluggish fire response.

Turkey doesn’t have firefighting planes and has had to rely on other countries, including several EU members, for aerial fire support.

Southern Europe continues to see devastating wildfires fueled by soaring temperatures. Tourists and residents in some parts are still being evacuated. The European Union said it “stands in full solidarity with Turkey”, sending planes to combat roaring fires#rescEU #eusolidarity pic.twitter.com/D0byHhBOLd

Erdogan tweeted a statement regarding the fires: “We will continue to take all necessary steps to heal our nation’s wounds, compensate for its losses, and improve its opportunities even better than before.”

Nex store in Greece, thousands of residents were evacuated in Athens as wildfires tore through the northern district of the metro area. Homes were burnt, and power grids were severed.

“It is a large fire and it will take a lot of work to get this under control,” greater Athens regional governor George Patoulis told state-run ERT television. “The foliage is very dense in these areas and it is very dried out due to the heatwave, so the conditions are difficult.”

On Tuesday, high temperatures were a blistering 115F as the country faces the worst heat wave in three decades.

“The fire is still raging, its perimeter is very wide and the heat load is very strong,” a fire official said Wednesday, according to Reuters.

In Italy, firefighters used helicopters with water buckets to battle the country’s wildfires along the Adriatic coast and Sicily region. Italy’s National Fire Corps said air tankers from Canada supported efforts to reduce the spread of fires where at least 715 flare-ups have been observed in the past 24 hours.

And then the fires started…

The heat wave is expected to abate in southeastern Europe after this weekend.

IOTA price gets ready for another 50% meltdown

At Cusp of $10, Natural Gas May Have Little Choice But To Go Higher | Investing.com

Powers On… When will we learn from recent history to protect our crypto and ourselves? – Cointelegraph Magazine