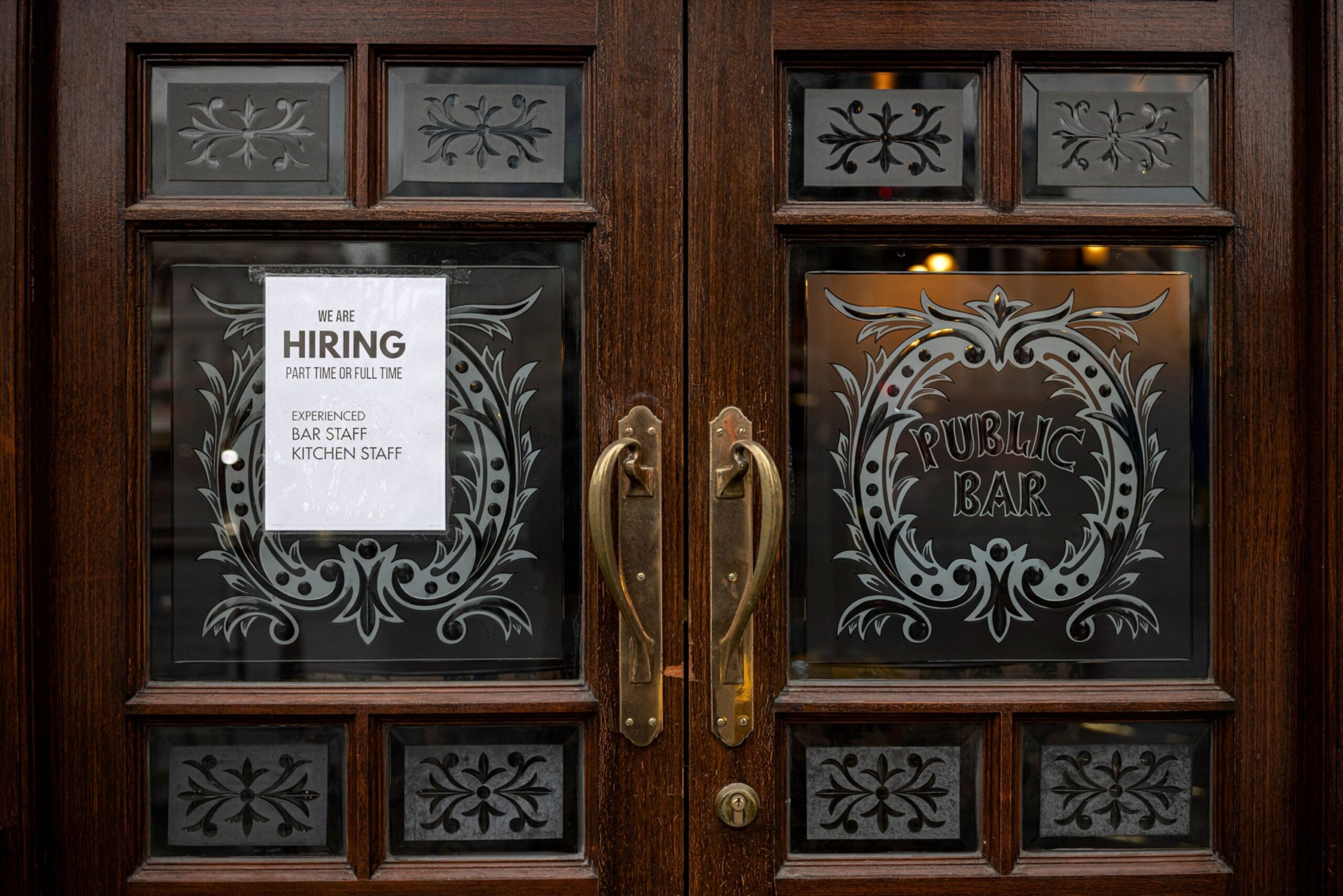 
On the outskirts of the Scottish town of Kirkcaldy is a crop of new houses on their way to completion. There are two large banners pinned to the perimeter fence with a mobile phone number: “Bricklayers Required.”

Rather than prices or availability dates, the most visible sign for passing drivers speaks to one of Britain’s biggest challenges post Brexit. Companies across key parts of the economy just can’t find enough people.

The focus in recent weeks has been on the hundreds of thousands of individuals being told to isolate because of exposure to COVID-19, the number hitting almost 690,000 in the latest period. Yet as the pandemic cloud starts to lift and the economy is unshackled, the true impact of the shortage is becoming more apparent.

The number of European Union construction workers in the UK has halved over the past four years. Contractors who laid off employees at the start of the pandemic are struggling to hire them back. Other industry groups say members are crying out for food processors, workers in retail supply chains and heating engineers, among others. Vacancies for truck drivers have hit 100,000, according to the Road Haulage Association.

That will raise questions over the government’s mantra to “build back better” around ambitious infrastructure projects and its “green industrial revolution.” As Noble Francis, economics director at the Construction Products Association, put it: “Where are the workers going to come from?”

There’s also the prospect of more employers having to push up wages to attract talent, adding another catalyst to inflation that’s already worrying central banks and financial markets.

Starting salaries are rising the most in seven years, according to the Recruitment and Employment Confederation. Anecdotally, day rates for skilled tradespeople have already risen 15% while firms are also introducing more flexible hours as an incentive. Supermarket chain Tesco Plc is offering a joining bonus of 1,000 pounds ($1,400) to truck drivers.

At Northern Irish firm OS Doors, which makes doors for kitchens, bedrooms and bathrooms across the UK, pay inflation is running as high as 10% for highly skilled workers who can operate any machine in the factory.

Chief Executive Officer John Toomey says his main concern is retaining his cohort of 350 workers, 80% of whom hail from the European Union’s eastern states, largely Poland, Latvia and Lithuania.

“The reality now is if we are looking to fill a vacancy and we are not offering a top pay grade you will not find the people,” said Toomey. The UK’s post-Brexit points system for hiring non-UK nationals meant he had to turn away two Hungarians because they didn’t meet the criteria, he said. “The pipeline has totally and utterly dried up.”

Countries across the continent are experiencing holes in their workforces, particularly in hospitality, but the UK is the only one to have left the EU’s borderless skills market to curb immigration. Numbers vary on how many workers have left during the pandemic. A January report by the Economic Statistics Centre of Excellence put the drop in the non-UK population at 1.3 million, though not all from the EU.

The shift in the labor market was disguised by the pandemic, which distracted companies from properly preparing, according to David Jones, director of underwriting at insurer QBE. “It has essentially masked Brexit’s effect,” he said. “As the economy opens back up, many businesses will be shocked when their supply chains do not follow suit.”

The UK government is helping fill vacancies though training schemes to help jobseekers squire the necessary skills, a spokesman for the Department of Work and Pensions said. It relaxed rules for some critical workers last month in areas such as energy, health care, medical supplies and food production to ease the short-term squeeze from workers being “pinged” by the country’s app and told to self-isolate.

But the shortage occupations on the government’s website ranges from scientists and engineers to web developers architects and welders, not carpenters, bricklayers, truck drivers or meat processors. Professions on the list qualify for a skilled worker visa.

Nick Allen, CEO of the British Meat Processors Association, said one of his members employing 4,000 has 642 unfilled posts, 164 of which are for skilled positions. The company, which he declined to name to avoid spooking customers, had to cut production lines. “We know that when the problems over COVID are over, we’ll still have a problem,” he said.

At Unsworth, a freight forwarder that moves household brands around the country, the alarm bell is already ringing over Christmas supplies because of a dearth of drivers. It’s warning customers that surcharges could lift haulage costs by 20%, said Charles Hogg, the firm’s commercial director.

“Brexit gives us the opportunity to evolve some immigration policy to allow missing skill sets to come into the UK,” he said. “We’re not going to suddenly find 100,000 drivers tomorrow. We’ve got to ease it to allow qualified other nationalities to ease the gap.”

The Department of Transport said it had no plans to introduce a short-term visa for drivers of heavy-goods vehicles, and instead has relaxed rules to allow longer hours and is funding apprenticeships. “Employers should invest in our domestic workforce instead of relying on labor from abroad,” the department said in an e-mailed statement.

The dilemma for Britain is how to tackle the acute challenge of the pandemic on an aging workforce with the chronic effect of Brexit. Economists at Deutsche Bank warn a weaker labor market recovery could slow the UK’s return to pre-pandemic levels of output. Sanjay Raja, an economist at the bank, said the economy needs “active government policy” on immigration and investment to overcome the scarring effects of Brexit and COVID.

Regardless of the coronavirus, the UK was always going to be faced with these difficulties, said Dan Hanson, senior UK economist at Bloomberg Economics. “COVID was a short sharp shock, but Brexit is a slow burn,” he said. The combination will make it “nigh on impossible” for the economy to return to its pre-pandemic path, he said. 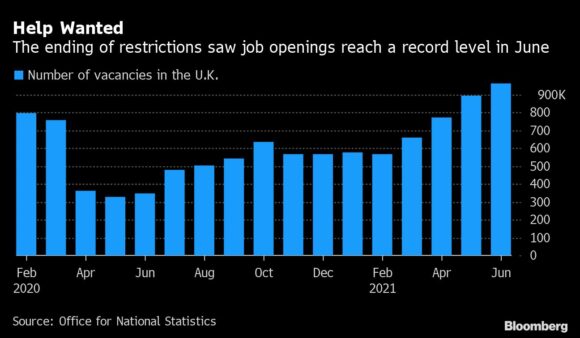 The immediate challenge is to find the people with the right skills. There was almost one million UK job vacancies posted in June. Yet there are still 1.86 million people on furlough at the end of that month, the UK tax authority reported on July 29. A survey from the Office for National Statistics found that jobs in the performing arts and those related to air transportation were among those most likely to be on wage support.

As well as new immigration rules, a barrier is that the government’s apprenticeship program doesn’t address the scarcity of people with the necessary skills, said Tamara Hill, employment policy adviser at the British Retail Consortium. “Ultimately, this underlines the urgent need to expand the funding to allow retailers to upskill their current workforce to meet the demands of the future,” she said.

Before the Brexit referendum in 2016, Darin Burrows used to book conference rooms in hotels across Europe to recruit carpenters, interviewing as many as 100 a day for his construction recruitment agency. Now, he’s finding it almost impossible to find applicants to take the roles. The situation is the worst it’s been since before the EU expanded eastwards in 2004, he said.

“It is chronic in every sector, from Scotland down to Cornwall, whether it be carpenters, house builders or civil engineers,” said Burrows, a director at London-based City Site Solutions. “This is the worst ratio of fulfilment for jobs I have had since then. It is a vicious cocktail.”

Mark Price, an ex trade minister and former managing director of upmarket grocer Waitrose, said the structural weakness in the labor market could crimp growth across industries from hospitality to manufacturing.

For many employers, it’s a first taste of the loss of “flexibility and dynamism” that came with the EU’s free movement, said Jonathan Portes, professor of economics and public policy at King’s College London. Even as the country opens up the economy and rules on self-isolation for more people are relaxed this month, workers may not come flooding back.

“A lot of people left because of COVID,” Portes said. “But a lot of them may not come back because of Brexit.”

–With assistance from Irina Anghel and Andrew Atkinson.

Top photograph: A “We are hiring” sign is seen in the window of a pub in Westminster on June 04, 2021 in London, England. Demand for workers in the hospitality sector has increased significantly following the easing of coronavirus restrictions earlier this month, but many are struggling to find staff. Photo credit: Rob Pinney/Getty Images.